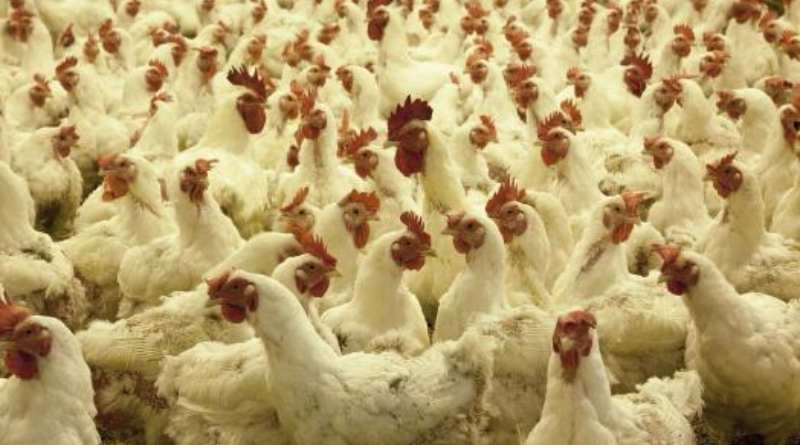 While Thailand’s military junta is anxious to show the West, in particular the U.S. State department, that it is cracking down on the human trafficking of workers in Thailand we can happily leave it to wealthy Thai businessmen to show how migrant workers fight for their human rights at their peril.

Two Burmese workers at the Thammakaset Poultry Farm today had to report themselves at Khok Dtum police station in Lopburi to face charges of stealing their time cards (to prove they worked a 20-hour day without overtime) for which they face a 100,000 baht fine or up to five years in prison.

The farce at Thammakaset Poultry farm followed the farce at the Natural Fruit Company where a report by Finnwatch exposed bad working conditions for migrants in the pineapple industry. This was followed by lots of cases under the Computer Crimes Act against Andy Hall, one of the report researchers.

Andy Hall was of course forced to flee. He won cases of course but National Fruit did not case. The followed a course of revenge. They kept filing. These sorts of cases are known in the U.S. as SLAPP. cases (Strategic Litigation Against Public Participation). They aim to cripple their opponents financially.

This is very easy in the Thai system as I found out when I won my cases because the court does not award costs. You need to raise cash to countersue. And even if you win again, it can be appealed and appealed. In my cases I was sued by foreign criminals who have now fled because they have been convicted in the criminal courts in Thailand too. But they cost me most of my cash.

I was considerably better off than a Burmese or Myanmar worker in Thailand. I was also able to raise cash from appeals on this site. Crowdfunding its called, but I don’t like the name much.

Now Myanmar workers are lucky to save a couple of thousand baht a month and they usually send it home to their families. So what position do you think the two defendants were in?

Right, so it was impossible to defend themselves without outside help. They need cash to live on and these cases as the plaintiffs well know go on for years. Not in a month of Sundays could they afford a lawyer. So, they were helped by the Migrant Workers Rights Network.

In fact, in cases brought against them with 12 other colleagues the courts have ruled that conditions at the poultry farm were bad and they were awarded 1.7-million-baht compensation. They had asked for 44 million so now both sides are appealing.

What a mess and a waste of time. And most importantly of all ‘What inhumane treatment or migrant workers. I hope the U.S. State Department and U.N. are watching.

Time and time again politicians have promised to review the Thai legal system (education system too).
Have they made recommendations dragging both even further down?

Here’s the press release from the Migrant Workers Rights Network via Andy Hall:

Today two of 14 migrant workers from Myanmar, who alleged suffering labour and human rights abuses whilst working at Thammakaset Farm Co. Ltd. poultry farm in Lopburi Province of Thailand, reported alongside lawyers from NSP Legal Office to give statements at Khok Dtum police station in the province.

This follows the farm’s filing of a fifth set of criminal charges in relation to an ongoing dispute against them, other workers and NGO activists.

Thammakaset Farm Co Ltd. was at the time of the alleged abuse against the migrant workers part of Thailand agro-giant Betagro’s European and Japanese poultry export supply chains.

If convicted of the latest criminal charges filed by Thammakaset on 1st August 2018 under section 335 (11) of Thailand’s Criminal Code, the two workers face up to five years in prison and/or a 100, 000 baht fine. These latest charges concern alleged theft of the worker’s own timecards showing working hours of up to 20 hours per day. The timecards were broadcast on 27th July 2016 alongside worker interviews concerning this dispute on Thai PBS news channel.

This increasingly publicised SLAPP (Strategic Litigation Against Public Participation) case has seen Thammakaset already file two separate criminal cases against the 14 workers for defamation, giving false information to public officials and theft. Both cases, dismissed by a first instance Court and Lopburi Public Prosecutor respectively, are still however being pursued on appeal and through private prosecutions by Thammakaset within the Thai justice system.

In addition, Thammakaset has filed three additional criminal cases against the workers, NGO activists and has also threatened more prosecutions including against local Thai journalists.

In June 2016, the 14 former Thammakaset workers originally filed a complaint with the Department of Labour Protection and Welfare (DLPW) in Lopburi Province about conditions at the Thammakaset 2 farm. On 1st August 2016, the DLPW ruled the company had violated Thailand’s Labour Protection Act by failing to pay workers the minimum wage, adequately compensate workers for overtime, and provide adequate leave. The DLPW ordered Thammakaset to pay 1.7 million Thai Baht to the workers. The case remains pending as Thammakaset requested in October 2017 to appeal all previous case rulings to the Supreme Court. The workers remain without any of the awarded 1.7 million baht compensation.

On July 11th, 2018, Don Muang Magistrates Court ruled the 14 former Thammakaset workers were not guilty of criminal defamation and giving false information to public officials. This private criminal prosecution on two separate charges, filed by Thammakaset against the workers in October 2016, concerned allegations of rights abuses contained in the worker’s additional July 2016 complaint to the National Human Rights Commission of Thailand (NHRCT).

The company claimed this complaint damaged its reputation. In this complaint, the workers alleged Thammakaset paid the workers less than the minimum wage, failed to pay overtime and holiday wages, and forced workers to work up to 20 hours per day without weekly, monthly, annual or public holidays. The workers also alleged their passports were confiscated and their freedom of movement limited by the farm owner.

Don Muang Court ruled (see attached unofficial English language translation of the Court verdict) the worker’s complaint was submitted to the NHRCT for further investigation in good faith and in accordance with Thai law and human rights standards.

Further, the court ruled that the workers four key allegations were supported by admissible and reliable evidence at trial.

Earlier in 2017, Lopburi Public Prosecutor refused a Khok Dtum police station request to prosecute two of the 14 migrant workers for theft in relation to the presenting of worker time to Lopburi DLPW officials in their claim for the awarded 1.7m baht compensation. In response to this refusal to prosecute the case, Thammakaset filed the same case as a private criminal prosecution in Lopburi Court against the workers, to which an additional prosecution was added against Suthasinee Kaewleklai, Thailand coordinator of the Migrant Worker Rights Network (MWRN), an organisation assisting the 14 worker’s case.

Lopburi Court is due to rule on 3rd September 2018 whether to accept this private prosecution for a full criminal trial.

Thammakaset also filed a complaint against Andy Hall in November 2016, alleging criminal defamation and violations of the Computer-related Crimes Act in connection with his use of social media to highlight the case against the workers. Thammakaset is utilising the legal team also used by Natural Fruit Company Ltd., the pineapple export company that has launched multiple criminal and civil defamation and computer crimes cases against Hall since 2013.

According to internal Thai government documents, major German retailers and companies suspended sourcing poultry from Thailand following the original publication of The Guardian’s reporting of the Thammakaset case in August 2016.

In contrast, Nordic companies, alongside the UK’s Ethical Trading Initiative, the EU’s Amfori and a Thai poultry exporter, continue to seek to promote reconciliation in the dispute. These actors also continue to support the 14 workers through provision of legal defence funds and funds sufficient to cover any fines or bail costs to which the workers may become subject.
Following dissemination of information on the Thammakaset dispute, Thailand’s main poultry associations, whose members include leading poultry export companies, have submitted demands to the Ministry of Labour and the NHRCT seeking amendments to Thai labour laws.

In contrast to international standards of decent work mandated by many international buyers, these demands instead seek to ensure workers in poultry farms can work more hours per day without pay during break times and for up to 8 weeks without a weekly day off.

Thailand’s Ministry of Justice claims it is currently developing measures to protect human rights defenders and whistle-blowers against SLAPP cases in Thailand. The Ministry, alongside the country’s National Human Rights Commission of Thailand (NHRCT), continues however to be unable and/or unwilling to mediate a peaceful settlement in this dispute.

May 30, 2017 Andrew Comments Off on ANDY HALL TO SUE THAI POLICE, PROSECUTORS, AND NATURAL FRUIT