AND AMERICAN NOYES HAS TOO MANY COMPLAINTS OF CHEATING!


Pattaya publisher Drew Noyes was told to take home a copy of a video called ‘Men in Suits and Influential People,” by a judge at Pattaya Court today who accepted the documentary into evidence and asked for Noyes comments.


“I have no problem with that. It will all be lies,” said the 57-year-old American former publisher of the Pattaya Times.

But in a loud outburst he accused the lawyer for British journalist Drummond of switching the tapes as she handled two copies of the video. “That is what he will do. He will give me one copy and a different copy entirely to the court,” he said.

Noyes said he had complained to the Ministry of Foreign Affairs, DSI and CSD, “There are several investigations into him.”

Drummond said he was happy with the support of the Ministry of Foreign Affairs and Public Relations Department.

Earlier Andrew Drummond had told the court that he had known about Drew Noyes for over ten years since a British citizen had called him and explained that he had to leave Thailand as a result of Noyes’actions.

He had bought a bar from Noyes, said Drummond either in Pattaya Second Road or Duck Square, but Noyes had sold the bar to other people. He complained but Noyes threatened him with police and court action. Noyes had owned bars called the ‘Zebra and Lollipop’ *

Later he came across Noyes again when he received information that many pornographic film makers had been arrested in Pattaya but their cases had disappeared in the system. Noyes’ ‘legal’company PAPPA  was involved in the negotiations.

He wrote about the case. Subsequently he received threats from Noyes that unless he took his stories off the web he would involve influential people.

Drummond said he then wrote a story after which many people started writing and telephoning and emailing to complain that they had been cheated by Noyes on visa, legal and property deals.

Some of them had gone to him after he wrote in his newspaper that the Thai government was planning to confiscate houses owned by foreigners in the name of dormant Thai companies.  Noyes persuaded some to their houses in his wife’s name.

Answering claims on his website that he had libelled Noyes by allowing a  poster  Alyssha  Saunders to make a post calling David Hanks and Pattaya People publisher  a pimp and referring to the ‘pimp Noyes’ and linking him to mia nois, the Buffalo Bar, and oral sex, Drummond said: ‘’The reader was obviously angry about certain foreigners in Pattaya. But there is nothing special about this.”

Earlier the court had heard with picture evidence that Noyes was a frequenter of the Buffalo Bar in Second Road, Pattaya.

“I presume he gave permission for his picture with a girl to be on their website” and that he had bagged the internet domain ‘officialblowjobs.info’ but Drummond added – “that has now apparently been transferred to me.”

“Given what I have written about him – the accusations I have made of cheating foreigners – this all seems a bit silly. 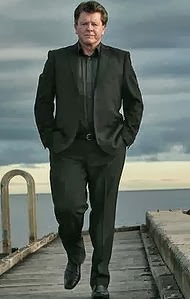 Earlier he had told the court that he had investigated David Hanks, a Scotsman,  who was sitting with Drew Noyes in a restaurant when Noyes was arrested together with Wanrapa Boonsu for the attempted extortion of the Pattaya Clinic.

(Drew Noyes and Wanrapa Boonsu are currently on trial charged with extortion of the clinic and also in the civil  court in connection with Dutchman, Theo van der Schaaf and 2.5 million baht, a settlement which Schaff gave to PAPPA to give to his Thai girlfriend).

Hanks had told a pre-trial hearing that there was a David Hanks registered as the proprietor of the Masquerades Brothel in Melbourne but there were many David Hanks’ in Australia. He gave the court the impression that it was not him – and his case was accepted.

Yesterday he was forced to admit he indeed was the owner of the brothel after evidence was unearthed by Drummond.

Drummond said he contacted journalists in Australia and checked the records of the Australian Securities and Investment Commission.  He also contacted the Scottish records office, as Hanks was born in Girvan. That confirmed that a man with the same date of birth and birthplace was the owner of Masquerades.

Additionally he had acquired picture evidence from Australia on Hanks; and a newspaper in Scotland also sent a reporter to interview Hanks’ sister  (Margaret McCulloch). She admitted that he knew her brother ran a brothel , but did not approve.

Hanks was a pimp as that is the only word to describe him apart from brothel owner. Drummond said adding that he did not write ‘maeng da’ and only Thais and people who lived in Thailand would really understand this expression  or ‘mia noi’. They were not in the Oxford Dictionary.

“This is a comment under a story in which Noyes and Wanrapa Boonsu were accused of extortion,” he said. It’s not much in the greater scheme of things.

Drummond had called Noyes many things in copy but not a pimp and had never used the expression ‘maeng da’.

People who commented on his site could use any name they wanted. He could not vet them. They had to sign in to Google.  He could only allow or delete.

He did not think he need delete the comments, but eventually he deleted the whole story because Wanrapa complained about a picture caption on the news story above the comments and he had no argument with her.
The case was adjourned until December 11.

It doesn’t get any better than this. Fake Scots lawyer and pimp sue Google

July 29, 2014 Andrew Comments Off on It doesn’t get any better than this. Fake Scots lawyer and pimp sue Google