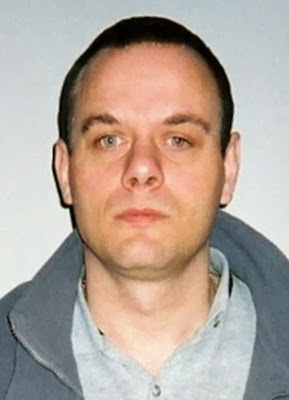 A former British Special Constable, who fled Britain while
staying at a bail hostel under licence having served a sentence for paedophile
offences, has been found wandering freely about in Cambodia having been jailed
there too for sexually abusing young boys.

Ian Paul Bower, 48, was last night detained at Phnom Penh International
airport by Immigration Police and taken into custody after having a deportation order against him annulled..
He had been sentenced to two years jail in 2012 for paying five Cambodian boys at a local temple in Phnom Penh from as little as 8p to £1.15p
for sexual favours.
But he was first arrested in Cambodia in 2007 for abusing
two brothers aged 12 and 14 while he was teaching English. But he was released
when the children withdrew their statements.
At the time Christine Beddoe, director of the campaigning
child protection organisation ECPAT said:

“We are appalled by the inaction of
the UK Government who failed to negotiate a diplomatic arrangement to request
Cambodian authorities to deport Bower.

“Innocent children were abused because the UK was unable or
unwilling to seek the removal of Bower from Cambodia.

“Bower is a wanted and dangerous criminal in the UK, he now
should serve his sentence in Cambodia and face the full power of the British
courts when he returns.”

When he was jailed in 2012 the court ordered him to be
deported on completion of his sentence. But again he managed to slip the net. Last
year the Cambodian Appeal court oddly dropped the deportation order after an application from Bower’s Cambodian lawyer. 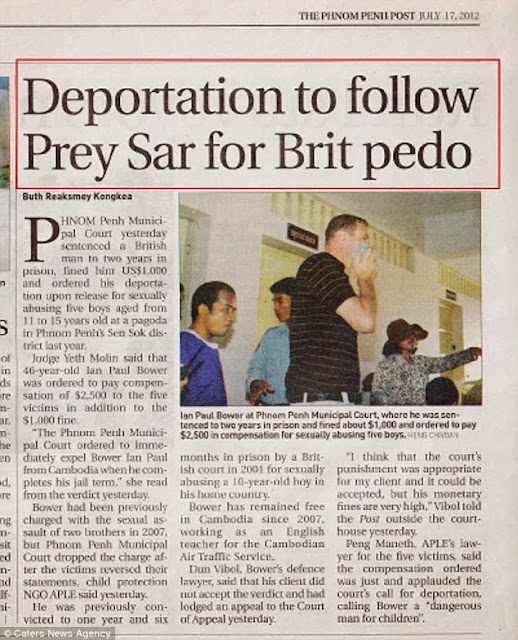 His presence at the airport in Phnom Penh suggests he may
have been attempting to go to another South East Asian country, either Thailand
or Laos. The removal of the deportation order would have given him a choice.
But the papers he left prison with would have no longer been valid.
He should now be deported back to the United Kingdom.
British police may be called to accompany him back home, where he still has to
be dealt with by the authorities for absconding.
Bower from Ilkeston, Derbyshire, was first convicted in 2004
at Derby Crown Court for abusing a 14-year-old boy and downloading and
downloading indecent pictures of children.
He was sentenced to three years and
nine months and on his release in January 2006 it was conditional on his
staying at the Burdett Lodge Bail Hostel in Derby. But he disappeared the
following month.
Last night Pin Piseth, chief of the Immigration Police Department
said: ‘ Ian Paul Bower, a British national, has been arrested for not
possessing legal travel documents while living in Cambodia.”
He declined to comment further.

WHAT’S COMING UP ON ANDREW-DRUMMOND.COM

December 4, 2013 Andrew Comments Off on WHAT’S COMING UP ON ANDREW-DRUMMOND.COM