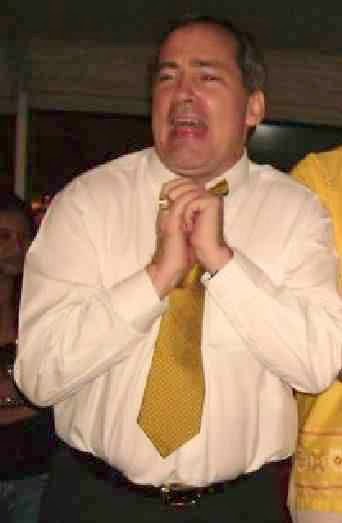 British journalist Andrew Drummond was today further acquitted of libel under the Computer Crime Act but a charge ruled him guilty of criminal libel for allowing two letters sent in by readers to be posted on the site www.andrew-drummond.com.


He is appealing the latter judgment.


Drummond was fined 40,000 baht and given a four month prison sentence suspended for one year and ordered to publish the judgment in the Thai Rath and Pattaya Times newspaper.

The order was later changed after the judge was told that the Pattaya Times, founded by one of the plaintiff’s Drew Noyes, was now defunct. The paper was substituted with the Pattaya Mail – not the Pattaya People, as expected.

The judge specified that Drummond had committed no libel himself but by allowing a post has ‘supported’ a libel by someone else.

The case revolved around comment by two readers who suggested at the end of a news story involving Pattaya ‘businessmen’ Drew Noyes and David Hanks, that plaintiff David Hanks, a Scot from Girvan, Ayrshire was a former pimp from Australia.

The comments further suggested that Noyes had mia nois, was living with a girl from the Buffalo in Pattaya, and was also a pimp.

Drummond produced documents from the Australian Securities and Investment Commission showing that David Hanks was indeed the former owner of Masquerades brothel on the outskirts of Melbourne, Australia.

Hanks admitted this in court but said his brothel was run by Chinese and the girls were all treated well. However he admitted at the license holder of the brothel it was his responsibility.

Of the comments made by a Ms Saunders and Tony, Drummond told the court that he did not consider the comments libellous but that his story was published in the public interest.  He himself had named David Hanks in the story as a former pimp but Hanks had not sued him over that statement.

Noyes, he said, was already in court in Pattaya on two cases involving dishonesty.  Using the word ‘pimp’ in his case did not necessarily mean he ran a brothel. The word had several slang meanings. When he himself referred to Hanks as a pimp he said, he stipulated the brothel so there could be no misinterpretation. In any case he had removed the comments.

Drummond’s fine was paid by well wishers. He announced he will be appealing the decision.

“Of course I respect the decision of the court but there are contradictions in the judgment which require legal scrutiny. Why was I acquitted of Computer Crime Libel but convicted under the older criminal libel laws?

“This is an international site.  Does this now mean that the editor of the letters page of the online versions of the Times, Sunday Times or New York Times, can be sued in Thailand or anywhere?

“There is also the consideration that Hanks admitted that he was the licensed owner of a brothel – a matter he was at pains to disguise when the case was accepted by the court yet that was the sole point he sued me on. I think this may be a Thai compromise decision.

“The court is returning my bail and the sentence is light – but I need to seek the opinion of the higher court so journalist know exactly what the ground rules.

“While I need to watch posters on my site closely this will not stop the exposure of a certain kind of foreigner on this site.”

The full judgment will be published on this site in English. Meanwhile Drummond thanks the supporters who continue pay for his defence.

So far Andrew Drummond has survived and won an onslaught of cases brought by American Drew Noyes, who was exposed before he came to Thailand by the Morning Star in North Carolina, Brian Goudie, who was jailed for fraud in Australia – and Drew Noyes ‘wife’ Wanrapa Boonsu. He has been acquitted and cases have been dismissed in eight cases.”

THE UNBELIEVABLE ANTICS OF A ‘MAYORAL ADVISER’

September 27, 2013 Andrew Comments Off on THE UNBELIEVABLE ANTICS OF A ‘MAYORAL ADVISER’