Fake Lawyers Fake News Fraud Property Scammers
February 11, 2014August 16, 2018 Andrew 1166 Views Brian Goudie, David Hanks, Drew Noyes, Wanrapa Boonsu min read
FROM HIDING BRIAN GOUDIE SAYS HE WOULD LIKE TO SAVE HIS THAI PARTNER – ‘BUT I JUST DON’T HAVE THE CASH’ – SO NOMINEE MANAGING DIRECTOR* MAY HAVE TO GO TO JAIL!

A fugitive Scot, who posed as a lawyer and a former officer of the Royal Marines to defraud legal clients, has said from hiding in Thailand he wants to surrender but he cannot pay bail for a Thai woman he made director of his pseudo law firm.


Brian Goudie, aka Goldie, told his lawyer from in hiding in Koh Samui that he wishes to surrender to Pattaya court and will do it this week.

He said however he still had not raised the cash for Sukanya Worakam, 30, a Thai woman whom he made managing director of his company Alba Laws.

Yesterday he made a mad dash from Koh Samui to Pattaya asking his Bangkok lawyer (above) to accompany meet him there.

An arrest warrant for the arrest of both of Goudie and Worakam was issued on January 29th by Pattaya Provincial Court. They are charged with cheating an American woman Barbara Fannelli Miller from Madison, Wisconsin out of US$300,000.

That is the amount Mrs Miller gave to Goudie, 47, from Falkirk, believing he was a genuine British barrister and on the promise that he would get her son out of jail on child sexual abuse charges. Her son was later jailed for 38 years.

Goudie had earlier taken two cases of criminal libel and two cases of libel under Thailand’s  Computer Crime Act out against journalist Andrew Drummond, who exposed his activities in a Scottish newspaper.  Both actions were dismissed. The court held the reporting was fair.

Goudie had given fellow Scot, David Hanks, 66, the former license holder of Masquerades Brothel in Keysborough, Victoria, power of attorney to represent him in court in Pattaya.

On Monday initial examinations in another libel case this time brought by David Hanks himself against Andrew Drummond at the Provincial Court in Surat Thani, Southern Thailand, could not be completed because of a late start and Hank’s refusal to answer questions of ownership of the Masquerades Brothel. He said it was not relevant to the case.

He eventually agreed that he owned the building but rented it out. The case was adjourned while the defence applied for the records of a court case in Thailand’s Pattaya province where Hanks made a full admission to being the licence holder of the brothel and later selling it to Chinese.

Hanks claims that Andrew Drummond, the Scottish Sun, and a website called GanglandGlasgow.com had caused him shame and caused people in Koh Samui, Thailand to shun him.

Hanks said he had been a respectable businessman for 50 years and now ran a furniture repair business in Pattaya called VPL Enterprise Partnership.

He said a headline in The SUN – OAP from Girvan is a Mafia enforcer – had libelled him and ruined his business.

The SUN through Andrew Drummond had linked him to Chinese mafia to whom the Sun said he was known as ‘Babyface, he added.’

Andrew Drummond did not write the SUN headline but he is defending the paper’s and his own right to report a Thai trial.

In another case in Pattaya of an American Drew Walter Noyes, who is being publicly prosecuted for extortion together with his wife Wanrapa Boonsu, Andrew Drummond reported how Hanks had checked into the clinic as a patient before a hit was allegedly made on the joint owner Australian Dr. Michel Goulet.

Dr. Goulet told the court he was asked to pay 7 million baht (later reduced to 2.3 million) to stop a police raid on his premises and Noyes ’now defunct Pattaya Times newspaper.

He said after checking into the premises Hanks told him that he had a sex business in Australia and knew the Chinese mafia.Dr. Goulet, he said,  should attend a meeting with his boss Mr. Noyes.

Dr Goulet said that after meeting Hanks he was fearful his own safety. The case against Noyes and Wanrapa Boonsu, Hanks’ business partner continues in Pattaya.

Hanks is disputing the comments from a court report.

Outside the court Andrew Drummond said: “I cannot comment on proceedings but if Mr. Hanks is genuinely running a furniture repair business he can sort out my sofa.”

Records show that none of the Hanks-Goudie-Noyes trio had paid tax in Thailand relating to their companies, VPL, Alba Laws, Ramidin Holdings, and PAPPA Co Ltd. 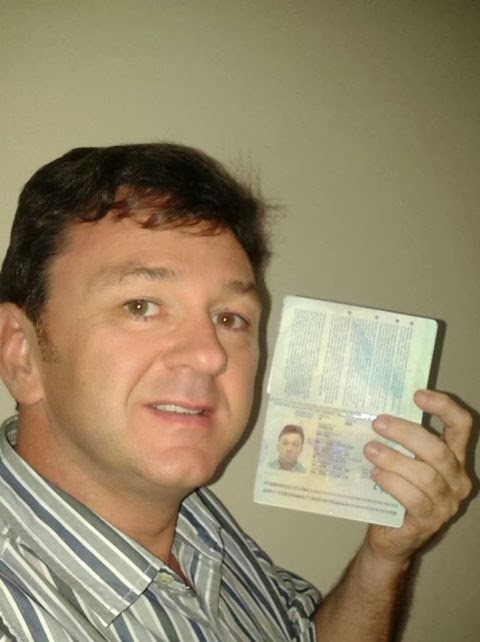 A police source said that Goudie had been in and out of Thailand many times often using land border checkpoints and returning to Thailand within a few hours. He was operating under two passports and border points had been alerted.

In terms of work permits Goudie had been issued them under both the names Goudie and Goldie.

Under the name he was born with, Brian Gerald James Goldie, an arrest warrant was issued for him in 1994 by the Lothian and Borders Police in Scotland for an alleged fraud  and in 2000 Goldie was arrested and later convicted and jailed for six years for stealing from his employers.

While on the run he has been furiously blogging that he is going to bring down his enemies who, he says, lie and visit prostitutes. In his latest claim on the internet he says that Drummond’s lawyer had begged for cases against him to be settled out of court. Drummond, he said, wanted to mediate.

‘Why would I want to mediate with a man on the run?” said Drummond.