Thailand’s military government, which is plagued with its own corruption problems having taken power on ant-corruption pledges, is now being accused of detaining the mother of a student leader to stop him demonstrating. 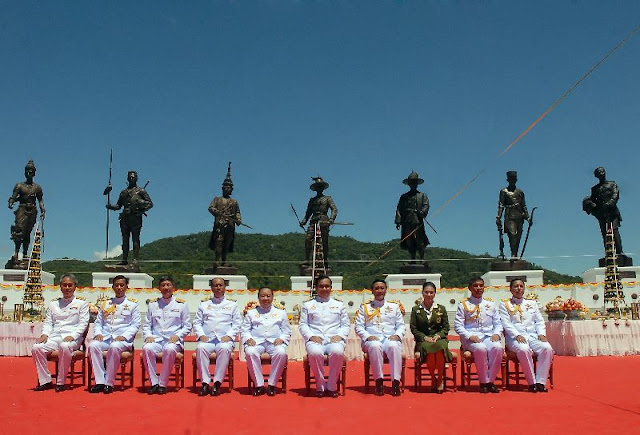 Sirawath Seritiwat said he will demonstrate ta Rajabhakti Park tomorrow- the park is a military project to pay homage to the King of Thailand and has allegedly been built in Hua Hin, 100 miles south of Bangkok out of funds raised from the love of Thai people…except it isn’t.  The Thai tax payer had to pay too and a lot of people were apparently shaken down for cash.

There have been numerous allegations of bribes and corruption involving all aspects of the park’s creation and the casting of statues of the King and Kings gone by costing up to a US$1 million a piece.

It’s a sensitive subject.  The park is said to have been named by the King and its name apparently translates as “the park built with the people’s loyalty to the institution of the monarchy”.

The Thai sovereign King Bumiphol Adulyadej who has his summer palace ‘Far from Worries’ in Hua Hin was not in a fit state to open the park personally.

Here follows the statement by Thai Lawyers for Human Rights

Public Statement of the Thai Lawyers for Human Rights

Regarding the persecution against Mr. Sirawith Seritiwat and his family

As Mr. Sirawith Seritiwat, a student leader, has announced the plan to make an excursion to the Rajabhakti Park plagued with scandalous corruptions and to organize some activities there on 7 December 2015, since 5 December, the Thai military officers have tried to approach him asking him to cancel the event and invite him for a meeting.

The student leader has declined the invitation to meet and simply turned his communication devices off. Being unable to reach out to him, the military officers have gone to meet his mother at her home instead asking her to convince her son to call off the event. They even threatened her that by not following their order, the family could not blame them for any ‘consequences’. Of late on 6 December, his mother was contacted by the military officers again and was asked to meet with them in a military barrack this afternoon.

The Thai Lawyers for Human Rights (TLHR) has found the behavior of the military officers a gross infringement on rights and liberties of people and unlawful. The Order of the Head of the National Council for Peace and Order (NCPO) no. 3/2558 simply authorizes the Peace and Order Maintenance officers to summon a person to report themselves or to give information on matters particularly concerning any culpabilities related to the offence against the monarchy, national security, and the law concerning firearms, ammunition, explosives, fireworks, and the equivalent of firearms, or any offence related to the violation of either the order or announcement of the NCPO or the order of the Head of the NCPO, only.

Therefore, the deprivation of liberty against the mother of Mr. Sirawith Seritiwat in order to stop him from embarking on his trip to the Rajabhakti Park has nothing to do with any of the four offences. Such an act is simply unlawful given that there is no legal basis for it to be carried out.

In addition, the act can be construed as an offence as per Section 157 of the Penal Code concerning the abuse of office, Sections 309 and 310 regarding a breach of liberty and an act of arbitrary detention which is a breach to Article 9 of the International Covenant on Civil and Political Rights (ICCPR). Any person subject to such detention can seek a judicial review asking the Court to have them released from any unlawful detention by invoking Section 90 of the Criminal Procedure Code.

The Thai Lawyers for Human Rights (TLHR) urges the military authorities to immediately stop such persecution against civilians by invoking the Order of the Head of the NCPO no. 3/2558 which has been issued by the virtue of the draconian Section 44 of the 2014 Interim Constitution.

With respect to rights and liberties

September 5, 2015 Andrew Comments Off on Constitution? Who needs a constitution