Australian James Guido Eglitis, aka James An, who was first exposed on this site as a boiler room fraudster in the U.S. and wanted on kidnapping charges in Australia, has surfaced in Bangkok after escaping robbery charges in Cambodia.

The 70-year-old career criminal and con man slipped into Thailand at the weekend after being released by Cambodian police.

He had been arrested in October last year in Sieam Reap with New Zealand national Brett Michael Hastie, 44, for the alleged September 29 robbery and assault of British man David Scotcher.

Scotcher was reported to have left the country in fear for his life. Hastie was released some time ago. The details of Eglitis’ release are sketchy.

Newspaper reports claimed that Australian authorities were considering seeking his extradition from Cambodia.   But they made no attempt to do so.

Whether they would seek extradition from Bangkok is also questionable. Relationships between the Thai military government and western governments are strained and there is little dialogue.

The Australian government may be reluctant to call in a favour from the Thai military particularly for a person of such little significance as Eglitis despite the seriousness of charges brought against him in Queensland.

In 2007 a Brisbane court committed Eglitis to stand trial in a higher court on charges of kidnapping, deprivation of liberty, robbery, impersonating a police officer and possessing restricted items.
But for his full colourful background follow this link. 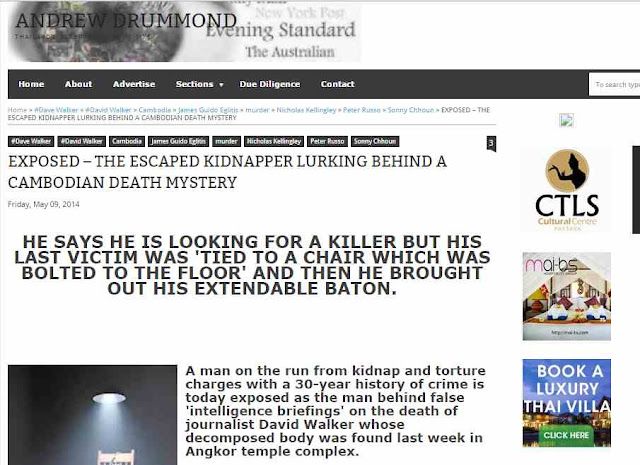 Meanwhile Eglitis has been circulating around bars in the Queens Park Plaza area of Sukhumvit 22 in Bangkok and strolling between the Holiday Inn there and the Honey Guest house and knocking back a few in the Joy Bar and Butterfly, er, down Honey Lane.

March 5, 2013 Andrew Comments Off on GUILTY OF MURDER – BRIT WHO TRIED TO NEGOTIATE THROUGH ‘THE FLYING SPORRAN’

MURDERS, RAPES, AND FRAUD – KOH TAO THE LAST STRAW FOR A FOREIGN CORRESPONDENT

October 4, 2014 Andrew Comments Off on MURDERS, RAPES, AND FRAUD – KOH TAO THE LAST STRAW FOR A FOREIGN CORRESPONDENT