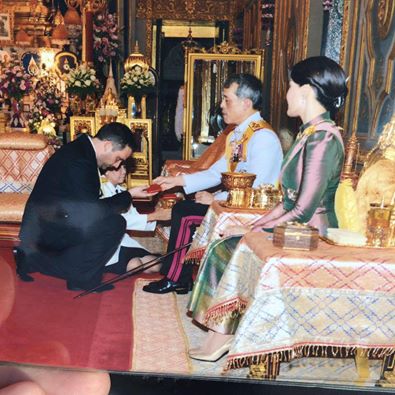 The sentencing of Briton Toby James Nelhams to eight months in jail yesterday in Phnom Penh for running an illegal online company in Cambodia – a boiler room fraud operation – came as something of a disappointment.

In fact, few trials either in Cambodia or Thailand get reported in detail.

Only the major cases are covered and they are usually topped and tailed (a growing trend in the UK too) meaning reporters might attend on the first and last days, or simply get the printed judgment.  And it’s a real problem getting access to trial records unless one is either the prosecutor or defendant.

Toby Nelhams, 45, who was allegedly running Springtide International (but denies it saying it was run by another Brit) is also wanted for the murder of Briton Tony Kenway, 39, from Southampton, in Pattaya.

The Cambodian prosecutor said Nelhams would be handed over Thailand when he had served his sentence.

He is alleged to have ordered the killing, but the alleged murderers have been named as Abel Caldeira Bonito, 23, a South African who is the suspected gunman, and his accomplice Miles Dicken Turner, 27, a Brit from Oxford.

They were caught on a CCTV camera as Kenway was shot dead in broad daylight while sitting in the driver’s seat of his red Porsche Cayenne GTS outside a sports club in Pattaya.

All these characters had moved from boiler room operations in Spain, where Europol was making their life difficult, to Thailand and Cambodia, where provided they are not ‘snitched-on’ life is easy and they can carry out the perfect crime.   All the victims, who can lose their life savings to boiler rooms, are abroad. So, to all intents and purposes as far as the local police are concerned there are no victims.

All the BR guys need to do is keep their heads below the parapet, keep the local police happy, which is their main expense, and sit back and wait as the cash rolls in to banks in Kong and Singapore, or some tax haven or other.

The worse thing that can happen is if they start feuding among themselves,which is what happened in this case.  According to Kenway’s Thai wife Toby Nelhams stole US$200,000 plus from her husband (presumably to set up his rival business in Cambodia).

Kenway in turn threatened to have Nelhams ‘sorted’ by his local police contacts – and is even accused of pulling a gun on Miles Turner in an incident in Thailand.

Caldeira Bonito and Turner arrived in Thailand from Cambodia on a Thursday and left the following Tuesday – just a few minutes after the murder, using the same taxi driver whom they had kept on hold at US$67 a day. They then re-entered Cambodia and simply disappeared and have not been seen or heard of since.

Are they really wanted?  Or rather would their arrest be inconvenient?  How can the authorities link Nelhams to the murder apart from hearsay evidence from his Thai wife?

This may be a case that may have to go under the carpet.

Tony Kenway was flash with his cash and unlike other boiler room operators liked to show on social media just how well he was doing.

He liked the images of himself for instance by his pool with his customary pretty Thai wife fawning over him as he worked his mobile phone giving his orders to his minions, recruited from Craigslist ads.

But the image of him being granted an audience with the current King of Thailand, while he was still Crown Prince, is perhaps one which he should not have made public. 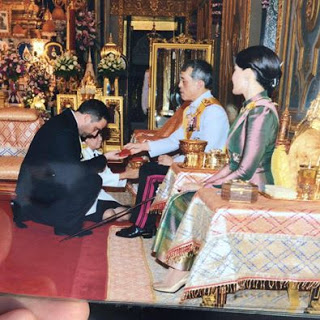 The Crown Prince’s wife has since been dismissed  Princess Srirasmi and her family, who have been outcast in a purge of  80 per cent of the officers of Thailand’s Central Investigations Bureau and Crime Suppression Police, who were accused of everything from selling promotions, trading in wildlife, oil tax frauds, and of course boiler room ‘protection’.

This order however had something of the ring of ‘Round up the usual suspects!’ uttered by Captain Renault (Claude Reins) in the film Casablanca about it.  And some people in Thailand are wondering why Kenway was invited to meet the then Crown Prince.  And who else has had a special royal audience?

Andrew McGregor-Marshall the exiled former Reuters Bureau chief has many torrid tales to relate, which is why he’ll be arrested for lese majeste if he returns. I wonder if they day will come when people will demand to know more about one of the world’s richest men.