The raids this week by the Women and Children’s department of the Royal Thai Police together with officers of Britain’s Child Exploitation and Online Protection Centre have given some hope to those who are bored with repeatedly seeing child sex abusers getting off scot free in the resort of Pattaya.

CEOP’s Press Office worked through the night in London and Press Releases were sent out to all the media in the early hours of Thursday.

After the arrests of two Britons, a German and an American, CEOP boss Jim

Gamble went on television extolling the fact that now nowhere in the world were child sex abusers safe from their clutches.

‘You don’t know which police force in which country we will be co-operating with next.’

Operation Naga was clearly being promoted as an outstanding example of successful police co-operation.  In fact CEOP praised the Thai efforts in every statement issued.

I’m all for publicity if it gives paedophiles the feeling that Thailand is no longer a safe country to operate in.

In an earlier blog I wrote that it was time CEOP got down and dirty in Pattaya. It has now happened. Nothing to do with me.

They have been operating in Thailand since November 17th.  So you can bet your bottom dollar that they have a lot more names in their little black book.  The figure of 50 has been mentioned.

But what is interesting is what they did not say, and no doubt continuing good relations with the Thai police and authorities had something to do with it.

Of the two Britons arrested one was Malcolm Henry Payne, aged , 59,pictured above, and the second was Robert Alexander Horsman.  Robert Horsman?  Wait a minute, that name rings a bell. 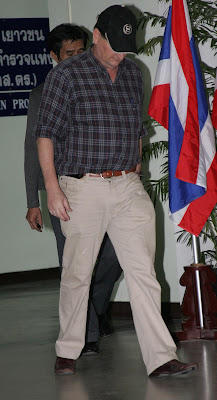 Yes. Robert Horsman , pictured left, was arrested in Pattaya in March 2006 and accused of indecency with five boys, one aged 10, two aged 11, and the others aged 13 and 14.

Convictions are a rarity. And the most famous convicted paedophile, Maurice Praill, 77, from Harold Hill, Essex, is still free despite being sentenced to 14 years imprisonment for child rape four years ago. (Authors’s update: Maurice Praill was finally jailed on January 28 2014)

He was arrested again while bail appealing his conviction. Where is his case now? Search me!

I first started writing about the release of child sex abusers in Chonburi Province 20 years ago. There have been classic cases.  One of them even gave a newspaper interviews as to how much he had to pay to get off.  Others have told me how much they had to pay, but they insisted they were innocent.

My initial reaction was outrage. I still am outraged but now this has been tinged with resignation. Having a young daughter now, however focuses the mind.

The system is foolproof.  Any criticism of a judge in Thailand carries a heavy jail sentence.  It is not for nothing that they are addressed by lawyers as ‘tai taow’ ( an abbreviation of ‘ I am mere dust under your feet’).  And you cannot necessarily blame the judge.  There are a number of ways child sex abusers can avoid punishment in Thailand – see note at end of story.

In many ways the recent arrests are a two-fingered salute to the Pattaya Police and authorities, though nobody in authority is going to say that.

For the British CEOP officers it’s a case of winning hearts and minds. The same policy adopted by most foreign police forces here.  They play the game with a mix of flattery and encouragement and a few beers to Thai police. It’s in the rule book.

But if you’re reading this, already sold on the fact that Thai police are dumb or corrupt, you would be wrong. There are some very smart cops out there capable of getting information in minutes. Straight too.

But the pressure of ‘passing the money up the chain’ is very strong and is in all provinces.

Thailand’s Immigration Department records would knock spots off many police forces for the information they have at their fingertips and the powers they possess.

The strange thing is, although child sex abusers in Pattaya are more cautious than 20 years ago, I never cease to be amazed about how open they can be about their activities.

Whenever a paedophile is arrested there are usually cries on blogs in Pattaya to have them ‘lynched’ or ‘castrated’ or worse.  But these more often sound like the utterances of  Pattaya’s prowling or resident ‘sex tourists’  which  I guess gives them some sort of feeling of normality.

So, seriously, if you do know about British child sexual abusers in Thailand and those pictured here, and are cautious about approaching the Thai police, you should get in touch with CEOP where your information will be treated in confidence  (www.ceop.gov.uk) .

Or, of course, I suppose you could call The SUN!

Although this week’s news is good, I think I would have to be an eternal optimist if I thought CEOP are going to change what has been standard practice in Pattaya since, well, the local police started to bother to arrest these people,  rather than just taking the money and asking them to move on or owning the bars and trading in children themselves.

Footnote: On December 22 2008 after CEOP officers had returned to the UK the Bangkok Post publish a report by Wassayos Ngamkham. Thai police were quoted as saying that the major player a Brit had escaped arrested during the operation.
‘It’s an organisation deeply involved in the sex trade with a British man as the mastermind,’ Pol Lt-Col Panya said. ‘He contacts customers through a website and has a Thai transvestite procure children for customers, most of whom are Europeans who have businesses in Thailand or retirees who have settled here.’
According to the inspector, the British man is a big procurer in Pattaya. However, on the morning of Dec 11 when police arrested four foreign paedophiles there, they did not find any evidence linking them to the mastermind’.
The newspaper was supplied with photographs by the Royal Thai Police.

I ,of course hope Thai police have not given the game away and that ‘Mr.Big’ has not skipped, but if he was not around for the December 11th raids, the chances are he has already.

How they get off

Child sex abusers are arrested so frequently in Pattaya, Thailand, that a cottage industry, has been built around the cases, from bail bondsmen, to avaricious lawyers, to some police ,who believe a financial penalty is the best solution all round, provided that they get a slice of the cake.

Abusers, not used to the system, may well be first approached by the bail bondsman. He offers to give the offender liberty, by say putting a land title down if the cases goes to court, and for this the defandant, pays a hefty whack.

Quite often the bail bondsman will have a contact in the police or judicial system and will continue negotiations which could result in any charges being dropped before cases get to court.

They usually warn the defendant that the longer he delays putting the cash down the more he will have to pay in the long run. If he can keep payments just to police then its going to be cheaper.  Of course, that’s not guaranteed and quite often the defendants still have to go to court and faces other financial charges.

Also lurking around are members of the ‘One-Stop’ shops advising foreigners on everything from visa, and land purchasing problems. They say they can do anything.  One such person was a reporter on a local newspaper, who was also a local volunteer policeman. He ran a one-stop shop, and would offer, for extra fees, to keep the matter out of the news.  This does not work any more because he cannot control all the new newspapers and television channels.

But at one stage when he was interviewing defendants on behalf of both the police and newspapers (armed with an electric stun gun for the former) and then fixing deals, he seemed to be all powerful.

There are also a number of lawyers who regular fix cases.  And cases can be fixed in many cases. I know some of these lawyers but I am not going to advertise their services here. They have been known to threaten local children’s charity caseworkers.

1. For a consideration the police investigating officer can arrange to give such a poor performance in court that the defendant will be acquitted for lack of evidence.  However, somebody else in the judicial system has to be forwarned, or the judge may convict anyway.

2. Police can also screw up the case so much that the prosecutor may decide not to proceed with it. And, needless to say, the prosecutor can screw it up himself too.

3. Payment can be made to the victims. This is the Thai version of what Gary Glitter did in Vietnam to evade charges of the rape of two juveniles and often the easiest way out. None of the juveniles wants to go to court. None of the parents want their kids to go to court. So payments can be made as compensation, and provided the police are looked after as well, this is often seen locally as a good solution all round.  Afterwards the children tend to go back on the streets again. If the childen are required to appear in court the evidence they give will not implicate the hands that have fed them.

This method is also easy because until recently nobody has wanted to shoulder the costs and responsibility of provided protection for the victims in the long lead up to a trial and thus they and their families can be easily approached.

* In the CEOP cases described above I should note that CEOP says that the victims are all being ‘cared for’ by local social services and charities (Except for one child witness who recently ran away).

Cracking A Nut With A Sledgehammer in Vietnam

July 4, 2011 Andrew Comments Off on Cracking A Nut With A Sledgehammer in Vietnam

February 4, 2011 Andrew Comments Off on Akha Hill Tribe Man Gets Life For Murder Of British Composer