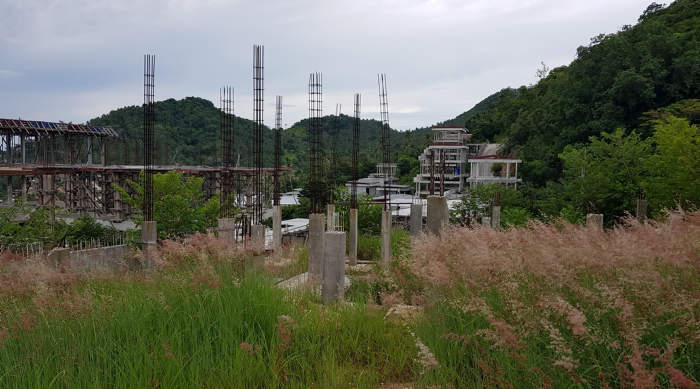 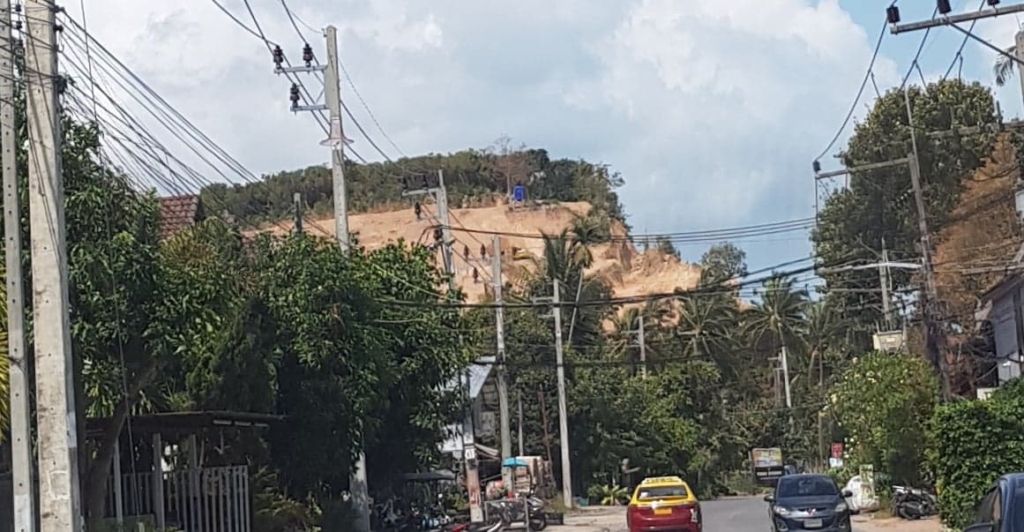 In a move that does not bode well for the predominantly Chinese buyers in luxury villa projects on the Thai island of Koh Samui the local Mayor has ordered work to be stopped on a billion baht’s worth of projects being built by the property development company KASA.

Meetings have been held with the local police and Mayor in attendance together with lawyers for both KASA and the buyers. But the current stand-off suggests that the only winners in the dispute may be local. And that is the norm.
French Consular officials and the Bangkok headquartered legal company Jus Laws are assisting the beleaguered French bosses of KASA John Dupiech, 29, and William Constantin who projects in Chaweng Noi had ground to a halt.

Michel Dupiech, the President of the French military sales company SOFRAPIE, has also flown in to ‘lockdown’ Thailand to come to the aid of his son and has taken the place as chief negotiator and to placate angry buyers whose dream homes are well behind schedule. Their projects Naori Residences, Naori Hills, Dune Residences and Dune Hills are abandoned building sites.
At least 12 buyers have been persuaded to bring fraud proceedings against KASA. If those cases go ahead, and this is Samui Court we are talking about, then anything is possible and the buyers are unlikely to get their cash back, if any, for years.

KASA directors believed they have been crucified in the media. The bosses have been described as living the high-life and driving about in their Porsches in Bangkok (presumably on buyers’ cash) and accused of threatening complainants with the local mafia if they do not shut up.
Buyers say simply that they have been cheated and want their money back. None of them appear to have the chanotes (title deeds) for the land on which their properties are being built, despite having paid for them.

Now, it seems, whoever controls the land holds the key to the dispute. Is it the original landowners, KASA, or someone else? The courts may have to decide. But KASA cannot deal in land in Thailand. And court cases in Thailand still run for years.

So, is KASA scamming? That is not highly likely, at least not as the law goes (but this is Samui). Did they exaggerate their abilities in the property business? Yes. Did they pay for a phony Samui Developer of the Year Award from Dot Property? – almost certainly yes. (To qualify you must subscribe to DOT Property and pay their fees. But KASA got the award before even finishing a property). But their major rows have been with local construction companies, which they have ditched in favour of importing their own Burmese labour.

KASA have recently put out this round robin to their customers. It should have been done some time ago.

Dear Valued Clients,
Hope this email finds you well.
This important note is relayed to you on behalf of our Chief Executive Officer, Mr John-Alan Dupiech and our Chief Operating Officer, Mr. William Charles Constantin.
Times of adversity proves one’s character and we must acknowledge that the past few months have not been as per normality, with the additional fact of the unforeseen pandemic of Covid-19 that has impacted many international brands and companies globally.

With this, we reiterate that it is imperative for us to persevere to prioritize and protect the interest of our clients, to achieve the delivery of your villa and we remain adamant for your villa’s construction progress towards this common vision. We remain legally binded (sic) by our mutually signed agreement in this business relationship.
During these challenging times, we, KASA have remained firm, consistent and persevered in pursuing our company’s development and growth; and we appreciate and thank you for standing in confident solidarity and faith with us. Therefore, aligning with our values of having an open and transparent communication with you, we would like to address this in detail to ensure clarity for you. Thus, we greatly appreciate your time and effort to read the narratives below in this email.

KASA started initially as a real estate agency with our intention for clients to have the opportunity to acquire a luxury villa here in Thailand, thereafter we developed in the interest of our clients as we identified a crucial missing element of developing luxury and high quality villas in Thailand.

As per other normal businesses in the commencement process, we encountered many difficulties such as certain aspects concerning deadlines due to the fact that our previous sub-contractors did not respect their contracts and were constantly requesting for monetary terms not as per agreements which led to disputes and delays. We also encountered the common issues of human resource management, logistics, staff development
We would like to add that from the court and police perspective, KASA is confident that we follow all the legal processes required as all our movements are first vetted by our team of legal experts to ensure all legal liabilities and rights as we believe following legal process is most imperative. We continue to follow our legal protocols and stay prepared in the case if we are wrongfully accused again, we are prepared and can justify ourselves almost immediately.

Please do not underestimate the legal repercussions for defamation and fraud as these claims are the actual criminal actions of defaming and tarnishing reputable reputations. KASA will not let this go unpunished and it is never in our intention to be in dispute with our clients. We are in a stronger position to not allow this to happen again. We shall dutifully update our clients about these cases.

We request you to not be overly concerned as this encounter has put KASA in a stronger position with enhanced strategies to achieve our common vision with you, to deliver your acquired villa.

Some important points to note:

As of today, we have more than 65 million THB unpaid to KASA as some clients got insecure with these unwarranted allegations.
KASA has lost some of our labourers during this recent pandemic period, and faced incapabilities to pay salaries due to the bank account being temporarily suspended for 3 months, however we are in process of acquiring more laborers, and with this Covid-19 situation, further documents are required to be produced to obtain more laborers. We should be able to have full ideal laborers by early to mid-September 2020. In the meantime, we will continue to build on a rotational basis as we want to maximize our construction productivity.

We will meet the municipality to request for these building permits to be resolved and work to recommence as soon. KASA will complete all the projects, and clients will be compensated accordingly pertaining to the late delivery.”

This is certainly something both the French and Chinese Embassies should be following closely. Koh Samui does not enjoy a reputation for straight dealing. Few people now remember how people bought villas in projects formerly known as Coconut Village and Coconut Grove built by Norbert Verweyen and were kicked out in 2016 after 30 years. (They were told their 30-year leases were extendable but at what a price!).

But the KASA case is beginning to look eerily like that of the case of Puravana Resorts in Phuket, a massive development being built by British barrister Steven Granville, into which I have looked in detail.
His project, also known as the ‘Lost Kingdom’ and ‘Summer Palace’ ran into a halt in construction after a major investor pulled out. Angry buyers brought criminal charges of fraud and he spent over a year in jail after being denied bail.

He was acquitted at trial and tried to resume the project. However, his reputation was in ruins and when local politicians offered to finance and build the project to completion, he accepted their offer.
He did not have much choice. He rang his mother to say that he had done a deal with the mafia. He had no choice as they threatened to put him in jail again. He told his head of sales. “I have to leave Thailand, or I am going to die here.”

Two days later he was found dead. Cause of death – four blows to the back of his head. Police put it down as a road accident.
The politicians all serve in the current Thai government – and one is an anti-corruption official.

Over to you Beijing. 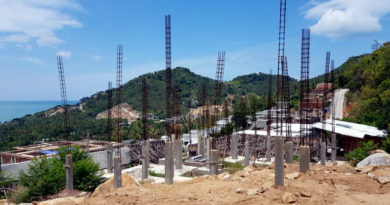 ANOTHER FINE MESS IN KOH SAMUI

July 24, 2020 Andrew Comments Off on ANOTHER FINE MESS IN KOH SAMUI