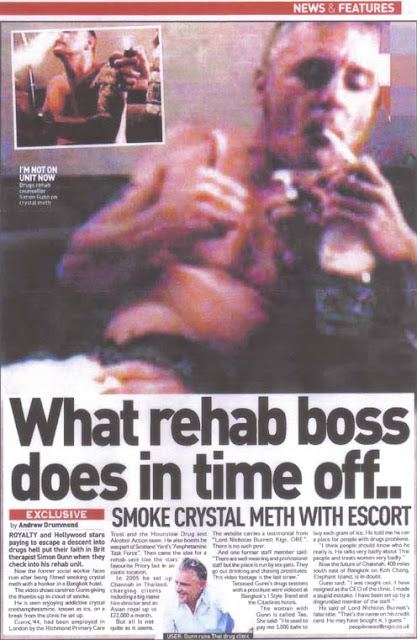 This is Simon Gunn. He is, or rather was, the wealthy boss of a drug and alcohol rehabilitation clinic in Thailand for royalty and Hollywood stars. But here he is flying high in a haze of ‘Ice’ – crystal methamphetamine.

Gunn, 44, who says on the website for the Channah Drugs and Alcohol rehabilitation centre that he was a member of Scotland Yard’s ‘Amphetamine’ Task Force, was filmed in a hotel room in Bangkok smoking ‘Ice’ with a female sex worker.

The video was taken on October 17th shortly after 9 pm. Simon Gunn says he was set up by a disgruntled member of staff but agreed alcohol and may have affected his behaviour prior to taking the drug.

While the heavily tattooed specialist in ‘Cognitive Behaviour Therapy’ inhaled his latest fix, 400 miles away on the island of Koh Chang, a well known Hollywood star and soul and rap artist was apparently  in his clinic, called Channah,  but planning to check out a week early.
And this is all happening in a country where the penalties for drugs offences are severe and in some cases fatal – something a drugs counsellor and aide to Scotland Yard should know.

Gunn boasts a 90 per cent success rate at his clinic.  One of his ex-clients not included in that reverential 90 per cent is 29-y-old Swede Kim Roger Eriksson.

Eriksson lived in the same ‘Trendy’ condo block in Sukhumvit Soi 13 in Bangkok  and who now faces death, commuted to life, for opening an ‘Ice factory’ in Rayong.

He seems to have admitted to dabbling in the production of ‘Ice’ but says he never planned to sell any, a curious defence.

He seems to be known to police back home.

Simon Gunn worked in West London for the Richmond Primary Care Trust and for the Hounslow Drug and Alcohol Action team but he arrived in Thailand nearly five years ago and set up his clinic for the stars initially near Kanchanaburi, 150 miles north west of Bangkok on the River Kwai or to be proper Kwae.

In a glowing write up, billed as an investigation by Max Wechsler, in the English language newspaper the ‘Bangkok Post’ he announced his clients included not only stars, but  a famous Hollywood film director and clients from  Australia, Bhutan, Canada, Egypt, European countries, India, Pakistan, the Middle East, both expatriates and nationals

With seemingly no sense of irony he added ‘I have to spend quite a lot of time convincing my clients that it is actually harder to get drugs here than in the United Kingdom. There’s the stereotype, like sex tourism, which is there but in a very small part of Thailand. Yes, drugs are around. But I have never been offered drugs in Thailand or seen anyone taking them before my eyes, like in some other countries.’

Clients apparently include a member of the Royal family of Bhutan the Land of the Thunder Dragon, but who perhaps does not quite have the appropriate level of  ‘Gross National Happiness’ which is often promoted in this Himalayan country.

A lot of Bhutanese actually have alcohol and drugs problems which may affect the GNH quotient.

Gunn nevertheless found those very small hard to find enclaves in Thailand where sex and drugs can been found and subsequently set up an office in Pattaya and a home in Jomtien. He has shown his wealth by driving a CRV, Porsche and a Jaguar.

With an imaginative website and some ‘therapy’ staff  he transformed a mid-range US$55 a night resort into a staggering US$35,000 a month rehab centre like the ‘Priory’ or ‘Clouds’ in the UK.
But there has apparently been a recent mass exodus of staff leaving with a litany of complaints. But basically they say it’s not what a drugs and rehab clinic should be and the staff were behaving, well like ‘sex-pats’.

At the time of the Bangkok Post’s famous article ‘Channah’ was based at the Siamburi Resort, north of Kanchanaburi.

The town itself has been abuzz with the antics of some of the Channah male staff at local bars including the ‘Ting Tong  Bar’, run by a guy called Ting Tong Tony, possibly not his real name, and at Bob’s ‘1 More Bar’.

Simon Gunn was regally feted as he was one of the few  foreigners, who frequent ‘the strip’ -a series of bars on the Mae Nam Kwae Rd – doing exceedingly well.   His riches rained down on the locals.

‘Just one more!’, was a cry often heard of course at Bobs’s bar.  Bar bills from Kanchanaburi bars were sent to the Channah and one, I am told, included a staggering 78 Bacardi cokes.

(NB I think Simon and I must have met the same girl as I did while researching this).

Many Brits may not be convinced by the following page one testimonial on the Channah’s website.

‘Dear Channah,
I felt I needed to write you to thank you for helping my good friend L.H. We sent him to you at his lowest point, after spending 4 weeks with you he returned clean and sober. He is once again the man I use to know and respect. Thank you once again.
Lord Nicholas Burnett Ktgc.OBE’

KTGC is the call sign for Gibson County airport in Tennessee.

Simon Gunn insists the man is real enough even though I suggested there was no such Lord. But he did add: ‘Maybe he bought the title’.  He’s certainly not Liberal Peer Lord Burnett who recently got up in the House of Lords to ask about Britain’s national debt.

The Channah moved from Kanchanaburi to Koh Chang a few months back where, when  it was the former the ‘Nisa Cabana Resort’,  rooms were advertised on TripAdvisor.com for US$75 (?47.50) a night.

While it is described as oceanside you would need a pair of sturdy legs and hiking boots to trek the 3 kms to the Gulf of Thailand.

Ironically when Simon Gunn gives talks to the resident patients he always has one story, say his former staff.

’90 per cent of all women in prison in Thailand are there because of problems with methamphetamines and ice,’ he warns.

The headline in the Bangkok Post declared: ‘The resort where everyone’s a winner’.  And Simon Gunn told reporter Max in the ‘Spectrum’ section: ‘One day we might be uncovered if someone very famous comes along followed by the press. I must admit that the British media are good in that and they will find us. But if we can make it more difficult for them, then we will do it.’

Simon Gunn resigned when he heard about the video. He says he is now receiving counselling himself.
I put a number of allegations to Mr. Gunn made by ex-staff. They included that (a) unqualified staff  were sent out to get drugs from chemists without prescriptions (b) there were no qualified doctors on premises or visiting regularly (c) that their top man, Consultant Addictions Psychiatrist Dr. Patrick Bordeaux actually lived in Canada and had only visited once in five years.

‘It should never have happened’

Mr. Gunn happily pointed out that a prescription WAS obtained for the specific drug ‘Stilnox’ which I mentioned and allegations that methadone had been obtained were untrue. ‘We do not provide drugs to clients’.  Medical doctors were not neeeded as this was a therapy and counselling unit and if necessary Dr.Patrick Bordeaux was happy to provide individual counselling where necessary over SKYPE.

I can assure readers that the man in the picture on the left taken from the Channah website is NOT a doctor, does not as a rule use a stethoscope and white coat, and is not at Channah.

As for the drugs allegations he said: ‘I made a stupid mistake. I was set up by a former member of staff.  The moment I heard of the video I resigned.

It should never have happened.’

Asia Health Co. Ltd, the parent company of Channah (Thailand) is half owned by Don Kogen the boss of Thai Gems and Jewellery Television.

A spokesman for Channah said that the company now applies Kogen Groups CSR – Corporate Social Responsibility. As for the allegations that staff had behaved like ‘sex-pats’ he said that what staff did off premises were their own responsibility. They could however not be on the premises drunk.

He insisted that a British member of staff and long term ex-pat, best known at the Crossbar pub in Bangkok, was perfectly sober when he was attacked by prostitutes at White Sands Beach Koh Tao, an incident involving local police.