Briton Malcolm Leggett, 60, is working a rice paddy in Northern Thailand. He lost almost everything. But the cruelest cut of all came, he says, after he went to the President of the local Pattaya Expats Club for advice – A Flying Sporran Enquiry 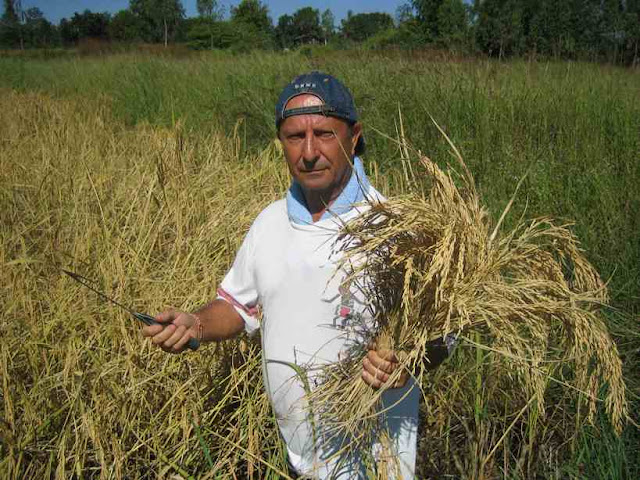 This is 60-yr-old Malcolm Leggett. He used to be wealthy. Now he’s broke and toiling in the rice paddies in North East Thailand just for the roof over his head and food on his plate.

Why?  ‘Because I took advice from the Chairman of the Pattaya ExPats Club,’ he says.

Malcolm was a successful businessman, running M.J. Leggett Builder-Carpenter, in New Milton, Hampshire. He was happily married, it seems, for 17 years before he and his Thai wife arrived back in Thailand in 2004 and settled in Pattaya where they already had a home ready to move in.

With a £500,000 nest egg from his work and the sale of two houses the couple began to operate a building business there.

He built nine houses and an apartment block of 30 apartments. But, as can happen, the marriage soured. His wife Orapin who had taken over the finances, then, he says, warned him ‘ to get out of town’ and, in her words, he had now ‘lost everything’.

In desperation he turned to the Pattaya Expats Club, run by Scandinavian colourful ‘businessman’ Niels Colov, owner of the Pattaya People newspaper and television station, and the former President of two Pattaya Rotary Clubs.

Not surprisingly he felt secure amongst other expats at their meetings in the city’s Grand Sole hotel and at the recommendation of the club he went to see Mr. Colov at the office of his Pattaya People at 20/15 Soi Town in Town, Pattaya, with his problem.

Niels Colov, he said, then passed him on to his ‘wife’ Laddawan Yingyong to handle the Thai legal side of his problem.

‘She asked me about my income and I said I had none, but I had some cash reserves.  She said that for my own safety I should transfer the money to her, or our joint account, which we would set up, to stop my wife making a claim on it,” said Mr. Leggett.

‘I  agreed to use the cash to start a money lending business which she would operate.

“I trusted them completely. The Pattaya Expat Club is there to advise foreigners how to deal with local problems… to warn of us of local problems”.

By the time he had finished Mr. Leggett claims he had handed over 3.85 million baht to Laddawan to manage for her, all of which has now disappeared.

She said she had lent the cash out. But the only ‘borrower’ he could find in their money lending business, said Mr.Leggett, was Laddawan.  She has not given any details of what she did with the money.

Even a Ford Ranger pick-up truck, which she said she was buying for him and which was registered to the address of the ‘Pattaya People’  newspaper’s address, he said, was repossessed after she stopped making  the 11,000 baht monthly repayments.

He paid 50,000 baht to Laddawan for a lawyer, he said, and got inflated bills from her for services rendered, such as 5000 baht for translating a letter, and 3000 baht for a company search in Chonburi, but the lawyer complained he did not receive a penny. So he had to start again.

Despite calls, emails, and even personal appearances at the Pattaya People, Mr. Leggett said he has had no response.  Mr. Colov, he said, eventually banned him from his office, because he was going around there so often.

Since then Mr. Leggett has been awarded some 6 million baht, plus interest, in a divorce settlement over his nine houses and home, but his wife has appealed and the cash is locked.

It was hardly a half share, he says. But his wife, he said, produced evidence of an affair he was started six months after she kicked him out and his lawyer failed to get across the reality of the situation.

Meanwhile she has sold the nine houses.

Malcolm Leggett is now also going to court over his 30 room apartment block – Orchid Apartments -which brings in a revenue of about 100,000 baht a month, none of which he is seeing, and which his lawyer had failed to include in the divorce settlement proceedings. 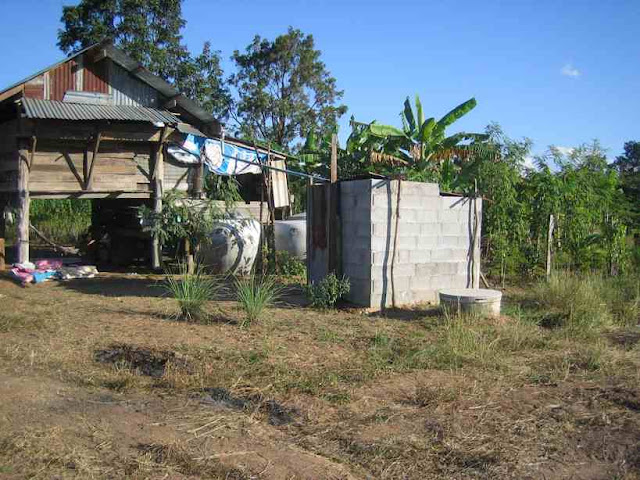 He cannot of course pay the lawyer until he wins and he lives out his frugal life in with his girlfriend’s family in an his Isaan house on stilts with the proviso that he works for his supper.

He has provided bank documentation, receipts for cash deposited and last July Mr.Leggett took them and finally filed a report alleging theft with Pattaya Police.

Laddawan Yingyong, he said, failed to turn up for three pre-arranged appointments at the police station and police did nothing else. 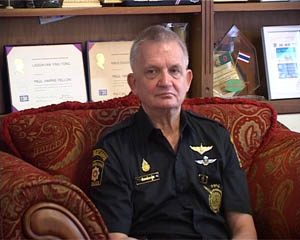 Her husband is also known for his role as chief of the Foreign Police Volunteers at the Beach Road Soi 9 Station.

Meanwhile Mr. Niels Colov has not replied to allegations sent to him .

Mr.Leggett but said she was unable to repay.

“I lent the money to people and they won’t give me the interest back or anything.

“This is nothing to do with Niels. He is a man of honour. He fired me from my job and we separated when he found out about this and we are living apart although we have children together.

“Maybe this will get better next year. Maybe he will help.”

But an hour later she rang back to say:”What’s the problem with foreigners in Pattaya?

” Why are they always cheating each other? Mr.Leggett threatened my and my family. He threatened us twice. I am going to make a complaint.”

Malcolm Leggett strongly denies ever making any threats and he said it was clear to him that the last time he was in Pattaya Laddawan and Niels Colov had NOT separated.

“Yes she told me she lent the money to people who would not pay her back but she would not show me any paper work at all showing who she had lent it to.

“Mr.Colov just shouted saying ‘Its nothing to do with me!’. But it was of course, and if he was a gentlemen he would have tried to sort this matter out.”

Meanwhile Malcolm is hoping that Barry Upton former member of the group ‘Brotherhood of Man’  who works  for Mr. Colov as his star DJ and  television presenter, might intercede and help.

‘I remember Brotherhood of Man. It was easily listening as I hammering away on houses back home,

“Barry seems a nice chap, perhaps if he reads this, he could put in a word for me to Mr. Colov.’

June 6, 2007 Andrew Comments Off on The Great Turkmenbashi