DID AUSSIE GO ARMED WITH PEPPER SPRAY? – OR IS THERE SOMETHING MORE TO THIS?

A simple story of everyday folk in Phuket.

PLUS
The Flying Sporran’s Wining and Dining Section.
October 6 2012.

Some controversy is raging in Rawai , Phuket, where British ‘fund manager’ Neal Davies known by the nickname ‘The Penguin’, has again fled a violent scene.

A very disgruntled Australian who ended up with a double fractured left arm, is insisting on bringing serious charges.

It all happened at the Corner Bar and Restaurant in Rawai and currently tourist police volunteer sleuth Garry Halpin has been trying to put together what happened.

Davies has been exposed on this site for ripping off clients. A British court ruling prevents him being a Fund Manager in the U.K. after he was declared bankrupt.

This is one version I got of the incident:

“Davies is sitting alone drinking about 8.30 when two guys sit either side of him he tried to leave but they stopped him.

“”Unfortunately the bar is popular as the owners are very well liked.

“I say unfortunately because the two guys then threatened the owner’s wife when she asked them all to leave her bar.

“Then they started to threaten the customers and told them it would better for them if they left the bar.

“Bad mistake by the two guys who then had the shit kicked out of them by the customers.

“While this was going on the shyster made his escape.

“Davies was back in the bar last night with the tourist police showing them what happened.

“If only they had waited or took him outside fkin dumb Aussies.

“The owners of the bar had no idea about Davies until I told them last night and they do not want him in the bar again.”

However as that version seems to lean quite highly on promoting the bar,  seems to be a trifle anti Aussie, and I am not sure that customers spontaneously leap with violence into other people’s arguments, I tracked down the two guys, who were American Vince Jones,  formerly involved in construction in Afghanistan and Brett Masters, an Australian real estate person on Phuket.

While this site does not report on bar brawls, readers will understand why we carry a watching brief 0n ‘The Penguin’.

Masters freely admits he went to the bar, where he was told Davies was, to confront him about some AU$30,000 which he claims he is owed by Davies.

This involves work he did on Davies’ purchase of part of the Belair Panwa Resort on the island.

He claims he did utter a few choice words and did raise his voice to customers in the bar and warned them not to invest in anything with Davies, to whom he did not attach the honorific ‘Mr’ but instead some Chaucerian.

Having done that, he said he returned to his colleague Vince Jones and they had two more drinks together before getting up to go. Though I would imagine if this was the case the atmosphere in the bar was still highly charged.

“After the confrontation,” said Masters, “Neal Davies began furiously texting and a man in a blue shirt whom I now know as Liverpudlian David Kelly, entered the bar and sat next to Kelly.

“As we prepared to leave the man in the blue shirt got up and shouted at some people at an adjoining bar to come and join him quickly. Some guys rushed in from an adjacent bar and jumping over the low separating wall.

“We were both attacked.  Vincent was attacked from behind and assaulted.  I was able to take out two of these guys but the blue tee shirt guy was swinging a metal bar stool down towards my head. I raised my left arm to protect my head.

“My arm was broken in two places.

“So much force was used that the doctor at Phuket International Hospital says that I would almost certainly have been killed had I not put up my arm to fend off the blow.”

Corner Bar – the low separating wall is to the right

Masters has filed a police report. He added:

“Garry Halpin has been coming back to me with reports that I was the one who initiated the attacked with a can of Mace.  If that were to be true then I do not think anybody would have been able to put an attack in.

Corner Bar – showing the barstools one of which was cracked over Masters.

“As for the pepper spray, if that is what it was.  I took that out of the hand of one of my attackers. I did not spray it into anyone’s face.”

Police say they have found a canister at the scene of the incident. But who introduced it to the scene?

Kelly, (below) a scouser, from Huyton, Merseyside, and seemingly a bit of a hard man, insists he was defending himself after being attacked with the pepper spray. A teetotaler, he had merely dropped by the bar to have an orange juice before joining friends at a nearby bar, when he was the subject of an unprovoked attacked.

He does however not appear to be in Davies’ inner circle.

Tourist volunteer policeman Garry Halpin said: “Statements have still to be taken and it will be a few days before we get a clear picture.”

Not until then could his bosses issues a clear statement. However he did say there appeared to be discrepancies between what Masters was saying and what witnesses were saying in the restaurant.

It is clear Masters has a major beef with Davies,  a professional con man who has gone through many other people’s life savings.  Masters insists that he asked the owner’s wife three times to call the police and waited for police while the three Brits, one of whom was being held by his friend Vince, were allowed to leave on the bar owner’s orders.

Looking at the bank transfer order below its easy to understand Masters’ anger. 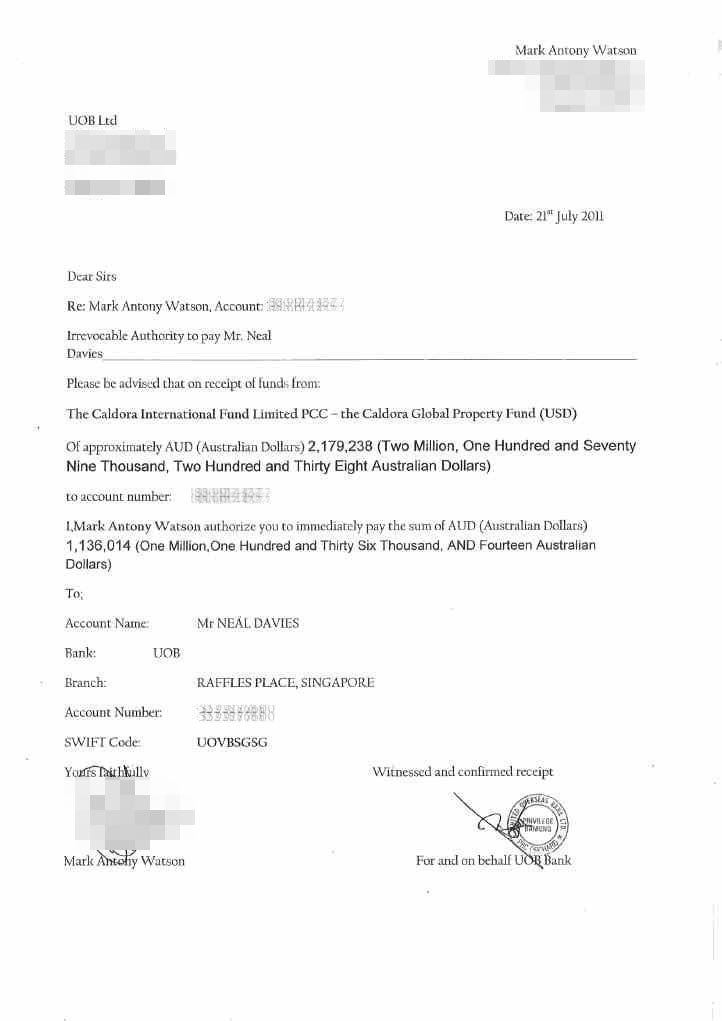 You can see how Davies not only cheated his own investors in the Caldora Global Investment Fund and Brett Masters, but also the Thai taxman.

Masters brokered the purchases and Davies took a massive commission on the deal for a major shareholding in the Belair Cape Panwa Resort which is why investors in him will rarely see any profits. Watson has confirmed these transactions took place.

However this is way over the head of the local police who understandly are more interested in keeping the community harmonious.

Footnote: This matter was settled with the owners of the bar paying damages to Mr.Masters of 15,000 Thai baht.

He has been banned from the bar and also say the owners is Neal Davies.

A crown of regulars had objected to the Aussie’s behaviour.

The Corner Bar in Viset Road is a ‘girlie bar’ which I am told serves delicious curries from the Curry Shack. Girls however do dance on the bar and elsewhere and the poles are provided for support.

Avoid this Penguin at all cost

Fists fly as grumpy old men fight back in Phuket

True Lies – Exposing The Myths Behind A Massive Heroin Bust

June 18, 2007 Andrew Comments Off on True Lies – Exposing The Myths Behind A Massive Heroin Bust