The Australian director of a beauty and health clinic in Thailand told a court today how he feared for his life after opening a new branch in the Thai resort city of Pattaya.

Michel Oscar Goulet, 60, formerly of Alligator Creek, Townsville, Queensland, said the American publisher of a local newspaper, called on the pretence of selling advertising – but promptly told him he would have to hand over 7 million baht protection money as his premises were about to be raided.

Both Drew Noyes and Wanrapa Boonsu deny charges of attempting to extort cash out of the Thonglor clinic.

“He told me ‘I am here as a friend to warn you that this clinic will be raided by the police – the two men were downstairs’.  He continued that it would not be done today because it was a holiday.

“I told him. Thank you for the information and the meeting was over.

“The next day he called me so say he knew some high up police figure and that I should go to his office to discuss how to prevent any further problems and offer protection from police.”

He said he was asked to go to Drew Noyes’ – PAPPA Law Office – another of the American’s businesses but Noyes told him not to bring his lawyer.

At the office he met Noyes, Wanrapa Boonsu, known as Kung, and a Thai man in plain clothes.

“Drew Noyes said clinics that get raided usually have to pay 7 million Thai baht – AU$226,566 – to receive protection from the police. I said I cannot afford to pay that much. I will go out of business.

“Drew Noyes said ‘We can re-discuss this. My wife, Kung, knows the police and we will try to lower the bribe and soften them up over dinner tonight. Don’t worry. We’ll take care of it’.”

The following morning Goulet said he met Noyes in the ‘’Pig & Whistle’ restaurant in Jomtien for breakfast at 9 am.

“I did not say yes or no because I needed to talk to the shareholders but it was a Saturday and the banks were closed. So I told him I would call and let him know of my decision.

“After that I had a meeting with my own lawyer and he advised that I log a complaint with the police on grounds of extortion.”

While he was logging the complaint Kung called and asked if the money was ready.

“By this time the police were listening in because I turned on the speaker of my phone.

“I told them I was still in Central (Department Store) getting the money out of the bank.

“Shortly afterwards Drew Noyes called and asked if the money was ready.

“Kung called again to arrange a meeting at the News Steak Restaurant where Drew Noyes was having dinner.

At the restaurant police, he said,  told him not to enter until they gave him a signal, he said. 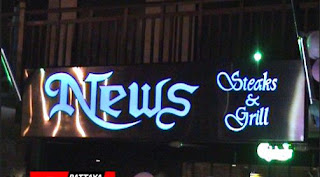 When he was given the signal undercover police were already in the restaurant. Goulet said he saw Drew Noyes and Kung with two other people. One was Melbourne businessman David Hanks, who was a patient at his clinic. He did not know the fourth person, a male European.

“I gave the briefcase of money to Drew Noyes. Then one of the policemen showed his badge and said: ‘You are all under arrest. Put your hands on the table.’

“Drew Noyes then grabbed his phone to make a phone call; the police stopped Drew Noyes and confiscated all phones.”

Asked by the prosecutor why he lodged the complaint Mr. Goulet replied:

“I was scared. I was scared for my life. I did not want to be the victim of extortion.  I have even hired bodyguards. I Googled his name and saw a lot of negative reports about him in America and elsewhere.

“I had never met him before he came to my office.”

The case was adjourned until June 11/12 by Judge Panyo Mokkomakul. 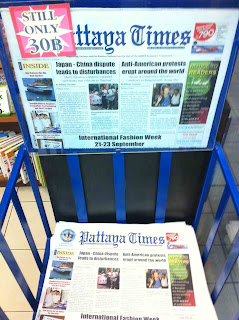 Drew Noyes’lawyers presented the Judge with a portfolio showing Noyes pictures with many local police chiefs, and politicians.

Footnote: The Pattaya Times claims to be a partner paper of the Bangkok Post. It has carried Bangkok Post advertising supplements. Drew Noyes has claimed a readership of 500,000, ten times that of the Bangkok Post.  This is unlikely. Most of the content is dedicated to eulogies on local politicians and police and much of the rest is lifted from the internet.

For afficionados of Drew Noyes who says, well I do everything, from beating up my children to being high on speed I cannot recommend his drummond blogspot website enough as a supreme example of  what low level of foreigner in Thailand I am up against.

* A child support case for a nine-year-old girl brought against Drew Noyes by a former mistress has been postponed until February 26 at Chonburi Family Court.

* Judgment will be given on February 15th at Pattaya Provincial Court in a libel case brought by Andre Machielsen, a seasonal Father Christmas whom Drew accused of being a drugs dealer.

* Drew Noyes and Wanrapa Boonsu, will have to appear in court on March 9th to face charges in Pattaya Provincial Court of fraud in connection with allegations they pocketed cash to be used to pay off the Thai girl friend of Dutchman Theo van der Schaft.

IS NOYES ‘ROAD RUNNER’ PREDICTION ABOUT TO COME TRUE? –

October 22, 2013 Andrew Comments Off on IS NOYES ‘ROAD RUNNER’ PREDICTION ABOUT TO COME TRUE? –