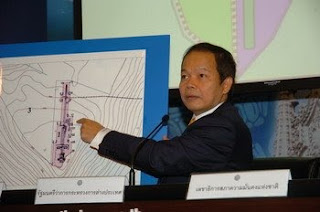 Ou Virak – the President of the Cambodian Centre for Human rights describes today as a ‘period of closer Thai Cambodian’relations’.  That’s hard to believe from the jingoistic and nationalistic stances taken by both Thailand and Cambodia over the Preah Vihear temple dispute.

And even harder to believe when reading Ou Virak’s own press release and letter to Prime Minister Yingluck Shinawatra.

He claims the Thai army shot dead 45 Cambodians last year and another six so far this year.  I cannot verify these figures and no doubt the Thai side will make an equal counter claim.

But to put it all in perspective the most people shot to cross the Berlin Wall in the worst year ever was 22.

But all this nationalism that’s just for the masses. The people making real money at the border are Thai and Cambodian businessmen and politicians. So those guys being shot are not making their break for freedom into Thailand – In the main they are doing business of one sort or another.

The Cambodian Center for Human Rights (“CCHR”) expresses its deep concern regarding the continual shooting of Cambodian civilians in Thai territory – which have caused countless deaths and serious injuries.  2012 saw a startling increase in the number of recorded attacks: the Thai-Cambodian Border Relation Office reports that 45 Cambodian civilians were shot dead by the Royal Thai Army in Thai territory during 2012 – a threefold increase on 2011 (15 deaths).  Six Cambodians have reportedly so far been killed during 2013, with several others seriously injured or still missing.

The shooting of Cambodian civilians resulting in death or serious bodily harm constitutes an unlawful act and a grave violation of the victims’ human rights.  Thailand is a party to the International Covenant on Civil and Political Rights (the “ICCPR”), to which it acceded on 29 October 1996, and is therefore legally bound by its provisions.  Article 6 of the ICCPR guarantees the right to life, while Article 7 stipulates that no one shall be subjected to torture or cruel, inhuman or degrading treatment or punishment.  Article 4 states that no derogations from Articles 6 and 7 are permitted.

Furthermore, Article 2 obliges signatories to respect and ensure the rights recognized in the ICCPR to all individuals within its territory and subject to its jurisdiction – which include Cambodian civilians who find themselves in Thai territory, whether legally or illegally.

Thailand is also a party to the Convention Against Torture and Other Cruel, Inhuman or Degrading Treatment or Punishment, Article 1 of which defines the act of torture, and Article 2 of which states that torture cannot be justified under any circumstances.

The shooting of Cambodian civilians violates all of these rights which Thailand has officially approved and to which it is legally bound.  CCHR notes – as per the Thai Code of Criminal Procedure as well as international standards – that the use of lethal force and firearms is justified only when used against a real, imminent and grave threat of death or serious injury, or to prevent the commission of particularly grave crimes involving such threats, or to arrest a person presenting such grave danger – in other words in self-defense.

In addition, the use of lethal force can only be used as a measure of last resort and must be proportional to legitimate objectives.  CCHR argues that since the casualties are unarmed civilians who find themselves in Thai territory while logging, and who in no way pose a real and imminent threat to anyone, such actions cannot be justified as self-defense as they are no less than extra-judicial and arbitrary acts of murder, nor can they be deemed a measure of last resort or remotely proportional.

CCHR has thus far not found any evidence of either the Thai law enforcement authorities or the National Human Rights Commission of Thailand taking any steps to investigate these murders and attempted murders of Cambodian citizens.

Such inaction not only constitutes a serious violation of the duty to investigate human rights abuses, but also indicates a complete lack of accountability on the part of the perpetrators if left unpunished.  In fact, such total impunity must be a key contributory factor in the continuing perpetration of these illegal and heinous crimes.

As a victim of the repressive Khmer Rouge regime of the late 1970s, I fled Cambodia along with the surviving members of my family and spent years in refugee camps in Thailand.  Having successfully sought refuge in Thailand, I find it all the more distressing to see Cambodians being killed in Thailand with such impunity in the twenty-first century.

It is therefore incumbent upon the Royal Thai Government – and indeed the National Human Rights Commission of Thailand – to conduct a thorough, prompt and impartial investigation of all shootings of Cambodian civilians and of all suspected cases of extra-judicial or arbitrary killings in Thai territory.

The investigation needs to be thorough, effective, independent, prompt and expeditious, and the proper judicial procedures need to be followed, in order to show that Thailand is upholding the rule of law and that justice in Thailand means more than just preserving the interest of the stronger.  Its outcome should be subject to public scrutiny, and the casualties, their families and representatives should be kept informed of the investigative process and its outcome.

Finally, in future, any Cambodians caught logging on either side of the ill-defined Thai-Cambodian border should be arrested and tried in a proper court of law – rather than executed on the spot.

Such human rights abuses have been ongoing for a number of years now, but seem to have deteriorated rapidly in recent times.

However, CCHR hopes that, in this period of closer Thai-Cambodian relations, this issue – as well as the connected border dispute – can be resolved peacefully and in line with international law and human rights principles.  The overall result would be stronger political, economic and social ties between the two countries.