BUT LITTLE OLD LADIES WILL HAVE TO WAIT THEIR DAY-

Runaway British solicitor David Rawlings who we reported to Sussex Police way back in 2010 has been leading a solitary life after being turfed out of the Butterfly Rock Golf Club in Hua Hin where he was the Captain.


Rawlings, who had a legal practice in Bexhill-on-Sea, Sussex, fled on bail after allegedly siphoning off some £250,000 of his clients money – including of course that of ‘little old ladies’ – Bexhill is known for its plentiful retirement homes.

In fact it was a pensioner 66-year-old Felicity Wells who put up £10,000 bail money and thus forfeited the cash.

Rawlings had appeared in court on a sample charge of procuring some £75,000 from another pensioner Katherine Wallace.

Rawlings however preferred retirement in the sun rather than being wheeled along the prom in Bexhill. He had cut a dash in Hua Hin where his additional funds nicely complemented his pension. Now 67, he was expelled from the club after a member circulated details of his arrest and flight which had been published in the Brighton Argus newspaper.

Sussex Police have made no attempt to extradite him back to the United Kingdom though he may have to return anyway, it has been reported.This despite a statement from Gerald Lynch of the Law Society that he would be brought back to the U.K. regardless. 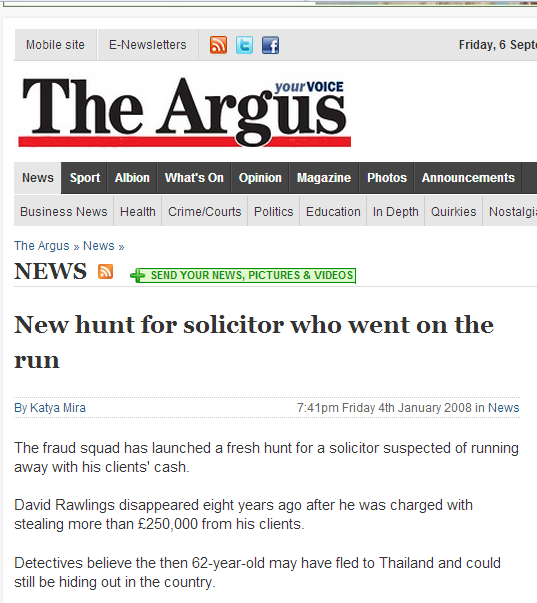 The costs and effort of extradition I guess are prohibitive and Thailand must have some much bigger British fish.

A former golfing colleague said: “Actually I feel quite sorry for him. He was very active in the Butterfly Rock Golf Club and his life circulated around it.”

AND THE MORALE OF THIS STORY IS –


Protected nowadays by the internet and rarely having to face probing questions, or answer to criticism, police in the U.K. can put out any sort of crap without any recourse at all.


For years Sussex Police were appealing for information about Rawlings’ whereabouts. When they were actually told – er, they didn’t want him. I have this come across this situation time and time again. Daren Oxley for instance, who fled a drugs trial in Sheffield and arrived in Thailand to start a development company and build himself a mansion is one such example. His wife has been charged with conspiracy to murder former U.S. Marine Back to Donald Whiting in Hua Hin.  Mr. Whiting did not like Mr. Oxley’s charges and was taking him to court.  Back ‘Life on Mars’ please.

December 7, 2010 Andrew Comments Off on A Pattaya Horror Story