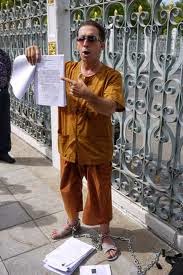 Will the system get you in the end no matter what you do? One thing’s for sure this man will fight on.
Benny Moafi is a fighter and his story is incredible. He has been jailed for 21 years in Thailand for a crime  – armed robbery – he says he did not commit. He went in fighting – and came out fighting nine years later.
The system is still trying to get Benny, an Iranian born Swede, and he is still fighting.
While in prison he graduated in law and went to fight on behalf of his fellow prisoners. He pursued some 200 cases. No surprise that various prison governors kept packing him off somewhere else.
He has campaigned legally against the Department of Corrections and his actions have resulted in the removing of chains from prisoners, the supplying of tooth paste and tooth brushes free, and even the reduction of the price of bananas in prison.
When he came out of prison having done his sentence he became the first person in living memory to demand a re-trial after serving his sentence and be granted it. He won at the Appeal Court.
But the system has got him back. Last month after the favourable decision by the lower court – the Supreme Court found him guilty again.

He would have been able to make a massive compensation claim for the years the Thai authorities took out of his life. Now his future is in the balance. 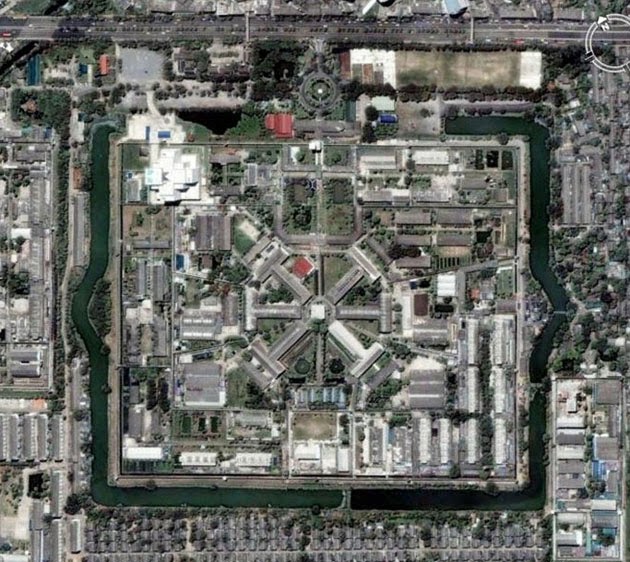 He has of course embarrassed Thailand on numerous occasions and exposed the country for clear breaches of  international treaties regarding the treatment of prisoners.  Now people know that behind the painted walls and manicured exterior gardens most Thai prisons are places where ‘humanity’ is not a byword.
Technically Benny could be deported – but he can’t while cases are being brought against him and he is bringing cases against others.
As for the armed robbery. That sounds dramatic. It was not. He was, he says, merely trying to help an Iranian couple who had paid a fortune for documentation to go t0 Canada to a Syrian only to find they had been scammed out of US$12,000. The couple and Benny took a policemen with them to demand their money back. The policeman subsequently said he had been warned off and declined to come to the trial or even admit knowing Benny.
Apparently police were backing the scammer.  The details you can find below in a report by Dr. Danthong Breen,  senior advisor to the Union of Civil Liberties and in the links.
Meanwhile Benny of course it taking nothing lying down – Watch this site for details.
THE MOST EXPENSIVE BANANAS IN THAILAND
THE AMAZING CASE OF BENNY MOAFI

The Strange Case of Benny Moafi
by Danthong Breen
Benny Behnam Moafi, a 45 year old Swedish citizen born in Iran, does not tolerate an injustice which uses the distortion of law to practice trickery and oppression.
Marrying a Thai woman in Sweden the couple in 1995 moved to Phuket where he appeared easy prey to corrupt officials in the police force and immigration office. They demanded a monthly protection fee and charged him of working without permission when he refused their extortion.
The Prosecutor dismissed the charges. Being a threat to extortion rackets on the island he was declared a Danger to National Security, and named as a Persona Non Grata. Fighting back, Benny made a formal complaint to the Ministry of Interior and Chief of Immigration in May 1997. The complaint was dismissed and he returned to Sweden for two years. Changing his name he returned to Thailand to dispose of assets he had been forced to abandon.
Benny’s hatred of injustice is such that he cannot tolerate that others are helpless in the face of cheating. 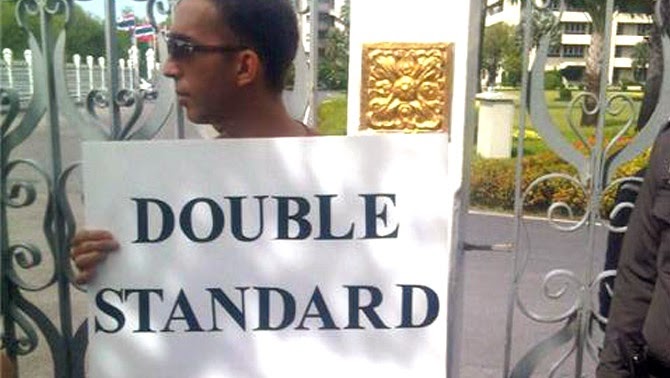 Meeting with an Iranian family who were charged several thousand US Dollars by a Syrian gangster who promised he could help them get a Canadian Visa, he called on the help of a Phuket Immigration Officer who had favored him in the past.
Benny acted as translator for the victimized family, coming to the hotel where negotiations between the victims, aided by the Phuket Officer, and the Syrian were held. He did not enter the hotel room but communicated by telephone and came to the hotel lobby and a stair way when the matter was settled.
The Syrian agreed to repay the fraudulent money but two days later reneged on the promise. When they asked the Phuket Immigration Officer, he told them that he had been told to stay away.
Then Benny advised the Iranian family  who filed a formal complaint to the Thai Tourist Police on 4th September 2000.  The high ranking Immigration officials with whom the Syrian was in collusion and knew Benny’s problem in Phuket Island urged the Syrian to complain to the Police Crime Suppression Division. 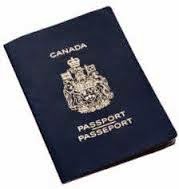 Next day the Iranian victims had left the hotel. The Syrian got to find the address of Benny and filed the complaint against Benny on 13th September 2000 and Benny was arrested at his apartment on 14th September 2000.
Police identified Benny to the Syrian as the interpreter, who now declared that Benny was one of those who had tried to extort money from him in that hotel room. The whole incident was changed to a crime scene and a case against Benny was fabricated, including charges that he had used a gun, a bat, a knife, and a bottle to threaten the Syrian.
At a time when his knowledge of the law and of the Thai language were inadequate Benny was charged and convicted, the only evidence being a photograph of the Syrian pointing at Benny as identification in the Police Station, Benny standing alone between a dozen policemen. Some details of the legal charges will follow in the final act of this drama, a decision of the Supreme Court of Thailand over 12 years later.
Benny was sentenced to imprisonment of 21 years and 14 months. Prison was the hard school where he studied Thai law and learned the cruel lessons of injustice relating to the Thai legal system and its penal code.
Over the years he perfected his knowledge of the Thai language, graduated in law through courses made available to prisoners by the Faculty of Law of Sukhothai Tammatirat University. But his real training in law was gained in the multiple cases which he fought for his fellow prisoners.
He relentlessly pursued the legal misdeeds of prison officials, and government, on one occasion taking legal action against the Prime Minister of the country and his cabinet. 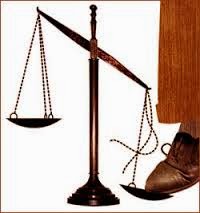 As he entangled the administration of one prison in legal process he would be moved to another. He was moved between 10 prisons and some 30 different buildings. When finally he was released from prison after ten years, benefiting from remissions of sentence, and probably the wish of prison authorities to see the end of his legal trouble-making, he had almost two hundred legal cases in process.
He had perfected his legal knowledge and skills of court procedure, daring besides to challenge judges and prosecutors outside the mode of servility of most defendants and their legal advocates.
He emerged from prison, a legal gladiator, ready for the ultimate struggle of returning to his original case and its glaring injustices. The basis of his appeal was new evidence he had unearthed and the opportunity given to overturn judgment by Legal Act 5(3), 1983 called the Act of reviving a criminal case for new reconsideration, year B.E. 2526 (1983). His belief in his innocence gave him confidence, despite the fact that in the more than 30 years since the Act was issued, no successful challenge had ever been made to a legal judgment.
He began by challenging the judgment of the Court of First Instance and achieved reversal of sentence. He progressed to the Appeal Court where again a condemnation based on flimsy charge was reversed. Finally, he must achieve reversal of the judgment of the Supreme Court.
His experience of the easy reversal of judgment in the lower courts and the care with which he had prepared the presentation of new evidence regarding tampering with police records and testimony gathered by his lawyer from the Iranians involved in the dispute with the Syrian, made him confident of ultimate victory and a unique triumph in Thai justice which would be the first case of Thai history to receive a second trial.
The issuance of a Supreme Court decision on the 26th June of this year was a devastating blow. The Court confirmed the original offence, and dismissed all counter evidences as being irrelevant.  In fact the lack of evidence for the Supreme Court decision is astonishing. 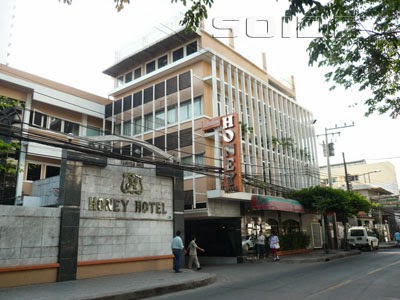 The events of the charge are the serious dispute said to have occurred in room 324 of Honey Hotel, Sukhumvit Road, Bangkok on 31st August 2000. But the floor cleaner sitting opposite the room 324 had given evidence that she well knew what a rumpus was caused by a serious dispute in a hotel room, but nothing was heard on the day of the supposed event.
Her negative testimony was confirmed by the service at the hotel lobby and the other people in the hotel who had confirmed that no one had ever known of such incident in that hotel till the police came to inform them. 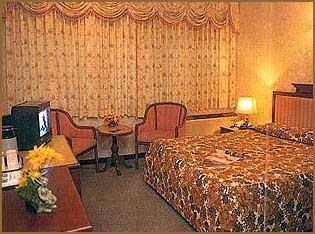 In addition, when the room was vacated the following morning there was no sign of any irregularity. The decision of the Supreme Court dismissed the testimony of the disinterested cleaner by saying that the room occupants could have tidied away all evidence of dispute before they left.
The testimony, reported from the Iranians who occupied the room confirming that Benny had not entered the room, gathered by the Thai lawyer who travelled to Iran to collect evidence, was dismissed as hearsay evidence.

The fact that neither gun nor bat nor knife nor bottle alleged to have been used by Benny were ever supported by any evidence was ignored and Benny was sentenced for the possession of a non existence gun.

Above Benny Moafi on Thai Channel 3

The witnesses may not have heard unusual sounds out of the room 324. The witness did not testify as the guests in room 324 terminated the lease and left the next day and even the next day at approximately 11 o’clock the witness entered the room 324, she neither found any damage nor any broken items falling there.