When buying a house in Thailand beware you may be just paying someone’s bar bill. 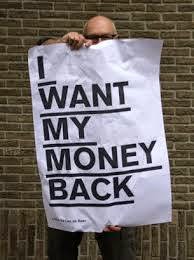 The symbolic guy here wants his money back. He has invested in
property in Thailand and paid pretty much all of the price. Yet the company
building the property does not even have the land – even though it produced its
own due diligence report saying that it did.
Over a hundred people have bought condos in the same project
Abatalay Condo in Jomtien so that’s a tidy sum the ‘developers’ have made by putting
out an artist’s impression of what the buyers thought they would get.
The man behind it is Canadian Richard Ian Silver, though he
uses his Thai wife as the front.
He was listed at one time as MD of the project
– but that lasted just three months. People remember him from a project called
Royal View Talay which – also never happened.
Silver and co are putting on a show saying they (CW Assets) are suing
the owner of the land for not handing it over (The owner did not because she was
not paid). But Silver will not go near a court of course. He’ll probably send along a bar girl.
He has invented a staff including his own imaginary PR lady.  It’s all bull.
Nevertheless he can
and will delay this for years – unless sensible action is taken.
There are over 50 artists impression up on the internet for
properties offered for sale in Pattaya by people making promises which will
never be kept.
A favourite trick is to offer the property under the name of
the company, but actually hold the land in the name of another – or even better
change the ownership of the land when everyone has already bought!  Or they can even mortgage (your property) to
a bank. The tricks are endless and banks won’t help you even if they have bought a dud. They will get their cash back first.
It’s not just happening in Pattaya – it’s happening
everywhere in Hua Hin, Phuket, Koh Samui – you name it.

Anybody can do it. You do not need any cash. Just wait for the cash to come in before starting to build, well. if that’s what you intend to do. 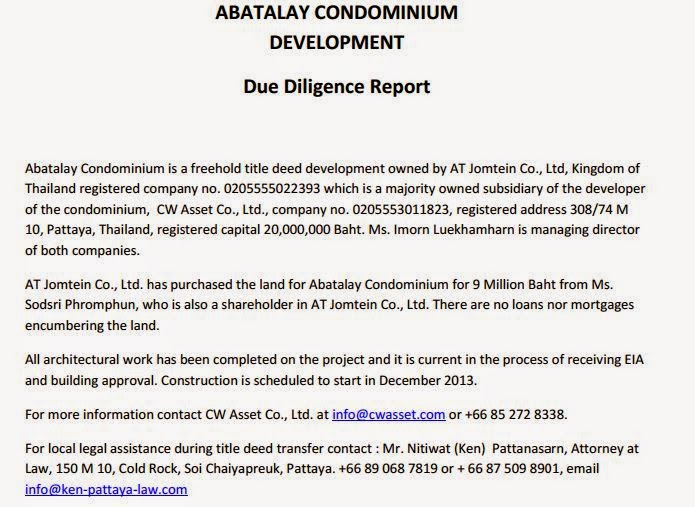 The local police will not help. Nor will the local Consumer
Affairs Department, unless you can find the proverbial red hot poker.
These frauds are so lucrative that now a crime syndicate from the UK is even investing in them – and if there is a crime syndicate from the UK involved – you can bet there are similar syndicates from other countries.
I get
flooded with requests for help. I wish I could. I do not have the time.
All I can do is warn and perhaps steer people in the right
direction – but even that has its hazards in Thailand.

Footnote: Live where Thais live. If the property is specifically built for foreigners there are catches – many. Or, as a reader points out, buy second hand and buy a second hand condo from a foreigner. (after getting it valued). There are real bargains. Thais often do not like buying second hand.

A CAUSE FOR COMPLAINT – CW ASSETS AGAIN

August 14, 2014 Andrew Comments Off on A CAUSE FOR COMPLAINT – CW ASSETS AGAIN

REVEALED IN THAILAND – A PROPERTY WRITER WITH A CONSCIENCE

March 22, 2016 Andrew Comments Off on REVEALED IN THAILAND – A PROPERTY WRITER WITH A CONSCIENCE