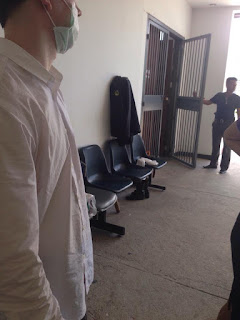 A Thai court held a young Aussie Jack Hansen-Bartel in custody today on a trivial misdemeanour charge concocted by a Chinese-American millionaire whose son and one other are accused of a vicious attack on him last year in Koh Samui.


The same police force which has been involved in the investigation of the murder of Britons Hannah Witheridge has placed a misdemeanor charge – and the same court has put Jack behind bars if only temporarily.

The penalty for the offence, were he to be found guilty would be less than US$50 but Jack and his mother have appealed for leave for Jack to attend Monash University in Melbourne and have been having trouble raising the cash for international bail.

Meanwhile his accusers, Raymond Chang and Ryan Wang are on serious assault charges and  have been allowed to return to the United States. Both Chang and Wang attended the Shanghai American School. Chang is now at Cornell University, New York. 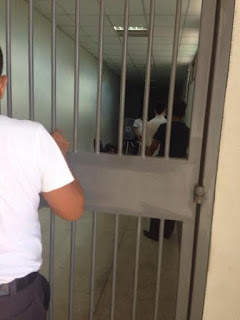 Jack Hansen-Bartel from Melbourne attended the New International School of Thailand. All were on holiday on Koh Samui last June in the police controlled Green Mango Club in Chawaeng, when Jack was the subject of a serious attack, and is now undergoing a two year course of surgery.

The alleged culprits were quickly found, shopped by fellow pupils who were horrified at what went on. But shortly afterwards Chang’s millionaire father Raymond Nobu Chang,  currently studying at the John f Kennedy School of Government at Harvard, arrived to bail the his son and Wang out.

They then asked police to present assault charges against Hansen-Bartel.

But police could not find the evidence, hence the misdemeanor charge. A Japanese New Zealand young woman, Tiffany Turner, was put forward as a witness claiming Jack was pestering her.  But she is now refusing to give evidence after CCTV footage was discovered showing she had lied.

Jack’s mother Annie Hansen took the matter to the military government which said it would ensure transparency – but today’s decision indicates they have little influence over the Koh Samui cartels – or simply did nothing.

“Today day I learned that my brother is being held in jail on feeble, misdemeanour charges brought upon him by the defendants Raymond Tony Chang and Ryan Yunshang Wang; a ploy clearly tactical in nature, designed to detract from the severity of charges against them.

“He was pushed to the ground by prison guards once in the cell. He was put in the cell with a paedophile who raped little girls and killed them, and an ice dealer. It was reported to me via a proxy at the court that a settlement was offered by the defendants’ legal team, and that the figure promulgated was meagre and offensive, and was subsequently rejected by our legal counsel.

‘My brother faces years of reconstructive surgery and rehabilitation, and requires a formidable amount of money to complete his treatment.

”The defendants are spineless, and their families lack integrity whilst they continue to deny culpability. We will be going after them, their families and Tiffany Mariko Turner – the perfidious female antagonist who remains at the centre of this situation. We will continue to pursue legal justice for Jack. It is fortunate that there is a new public prosecutor assigned to our case (the old one was allegedly corrupt).

Annie Hansen-Bartel is reported to be trying to raise bail – but she has limited resources,

UPDATE; BAIL HAS BEEN RAISED AND JACK HAS BEEN RELEASED

COMMENT: This case happened last year. It was very straightforward. The two Chinese Americans even admitted the attack claiming that Jack Hansen-Bartel was pestering Tifany Turner. They should have pleaded guilty and taken it on the chin. But they have rich dads and Jack was a scholarship student. In flew Raymond Nobu Chang and everything changed.


But CCTV footage of which I have a copy tells a different story. Tiffany Turner was not being pestered at all. Hansen-Bartel was merely the victim of students who become thugs on alcohol.


Now Jack is charged and Koh Samui police even sent a policeman to Bangkok by plane to formally arrest him. Thai Police would not do that unless they were paid, And Koh Samui police are notoriously corrupt. I have witnessed that at first hand.  Police and the courts do not care about the Hansen-Bartels who are even having trouble existing in Thailand while this case continues in a disgusting and dilatory legal system. All they care about is cash. Its Thailand’s shame.


It now looks like this case is going to take years – but that’s the norm. Seems like there’s another Embassy out there that should be more direct in its travel advisories. Jack I should imagine will be out later if not already.

FAREWELL SEND-OFF FOR YOUNG AUSSIE IN BATTLE AGAINST RICH KIDS

March 3, 2015 Andrew Comments Off on FAREWELL SEND-OFF FOR YOUNG AUSSIE IN BATTLE AGAINST RICH KIDS

LYING RICH KIDS GIVEN THEIR PASSPORTS BACK BY KOH SAMUI COURT

August 18, 2014 Andrew Comments Off on LYING RICH KIDS GIVEN THEIR PASSPORTS BACK BY KOH SAMUI COURT

FROM A BANGKOK HOSPITAL A MOTHER’S CONTEMPT

February 16, 2015 Andrew Comments Off on FROM A BANGKOK HOSPITAL A MOTHER’S CONTEMPT