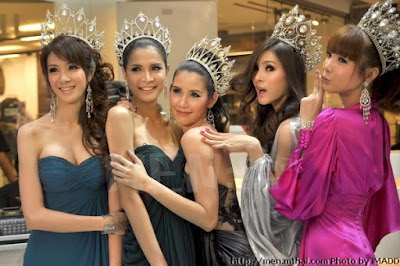 Human Rights Watch has condemned ‘grossly discriminatory’ remarks made against lady boys and gays by the Burma’s Minister for Border and Security Affairs.

The attack comes after Dr.Myint Kyu called for the rounding up of gay men saying ‘the existence of gay men who are assume they are women is unacceptable’.

HRW described the statement as ‘noxious’.

In neighbouring Thailand not only are lady boys tolerated but lady boy beauty contests are celebrated – and they also constitute a growing section of the country’s technically illegal but vibrant sex industry.

Lady boy bars in Bangkok’s Nana Entertainment complex have quadrupled over the last 15 years and even  normal ‘girly bars’ usually employ one or two. The majority of the clientele consider themselves to be normally heterosexual.

Ladyboys are also tolerated in the work place and several own large companies in the Thai capital.

(New York, September 3, 2015) – Burma’s government should publicly condemn grossly discriminatory remarks by a regional official about gay men and transgender women, Human Rights Watch said today in a letter to senior Burmese officials. The Burmese government is obligated under international law to protect all people in the country regardless of sexual orientation or gender identity.


During a regional parliamentary session in Mandalay in August 2015, the region’s minister of border and security affairs, Dr. Myint Kyu, called on police to arrest gay people: “The existence of gay men who assume they are women is unacceptable and therefore we are constantly taking action to have the gays detained at police stations, educate them, then hand them back to their parents.” He also indicated that the authorities had “checked on” and arrested nine gay men for “acting inappropriately.”


“Burma’s government has a responsibility to ensure noxious statements about gay people don’t go unchallenged,” said Graeme Reid, lesbian, gay, bisexual, and transgender (LGBT) rights director at Human Rights Watch. “Unless the government speaks out against such hateful words, it could open the door to more abuse of the sort described by this minister.”


Mandalay authorities have previously demonstrated disregard for the fundamental rights of LGBT people, Human Rights Watch said. In July 2013 plainclothes police officers in Mandalay arbitrarily arrested a group of 10 gay men and transgender women and abused them in detention. An investigation committee composed with township police chiefs from Mandalay division announced it was investigating the case but no subsequent information was ever reported.


Burma’s criminal law embeds discrimination against LGBT people. Section 377 of the penal code, drawn from a British colonial-era law, criminalizes same-sex sexual behavior. Such laws, which should be repealed, have an impact that extends far beyond their use by the justice system, heightening concerns of legalized discrimination and other abuse. The government should properly investigate the arrests and alleged abuse in detention in the 2013 case and more recent arbitrary arrests of perceived LGBT people.


“For the government to treat LGBT people as potential criminals should worry everyone in Burma who values their rights and liberties,” Reid said.

THAILAND UNDER ATTACK AGAIN FOR MISTREATMENT OF MIGRANT HOTEL WORKERS

December 9, 2015 Andrew Comments Off on THAILAND UNDER ATTACK AGAIN FOR MISTREATMENT OF MIGRANT HOTEL WORKERS