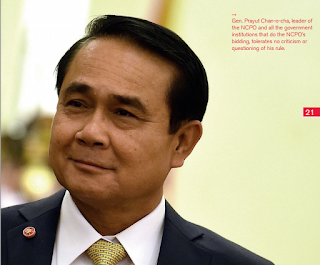 ‘Reporters without Borders today publishes a scathing attack by Thailand’s military leader Prayuth Chan-Ocha whom the report describes as an ‘eccentric megalomaniac’.


Led by Gen. Prayuth Chan-o-cha, the Thai junta has been persecuting the media for the past 18 months, imposing a reign of terror that has included interrogations, arbitrary arrests, a spate of prosecutions and barely veiled threats.

And it highlights the arrests of journalists under Thailand’s lese majeste laws (insulting the king).

As a result Thailand has lost freedoms won at a cost during the last decade which have put it at number 134 in 180 counties in the Press Freedom Index.

In terms of foreign journalists the report deals with the harassment of the Foreign Correspondents Club of Thailand, and highlights new questions now being asked about the their thoughts on the King of Thailand, and their opinion of the current government, when journalists apply for accreditation.

And the report singles out several foreign journalists. 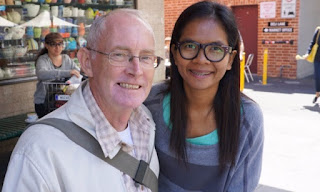 (1) The libel and computer crime act cases against Australian Alan Morison with Chutima Sidasathian, of Phuketwan, who were prosecuted by the Royal Thai Navy for suggesting that the military service was making money out of the human trafficking of the Rohingya.

They won their case but the Navy could still appeal.

(2) The attacks on German photo-journalist Nick Nostitz who was the subject of an orchestrated campaign of harassment by local after being accused of being a spy for the ‘Red Shirts’.

(3) The necessity for British journalist Andrew Drummond (author of this site) who investigated transnational crime to have to quit Thailand after 25 years after threats which would have affected the safety of his three children. 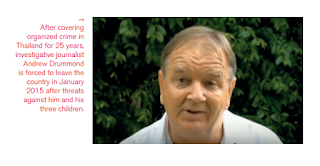 “The need to protect state secrets and prevent threats to national security is a useful pretext for covering up long-standing illegal practices and scandals, some of which have proved harder to expose than others. This is the case with Thailand’s “boiler rooms” – fraudulent international share trading centres involving foreign criminals, Thai organized crime and members of the Thai police and judicial system.

British freelance journalist Andrew Drummond received many death threats after getting too close to this milieu, one populated with every kind of corrupt official, policeman, army officer and judge. Drummond had to flee the country after the latest and most serious of these threats.”

Read the full report at this link and its recommendations.

* Actually the last threat was not a death threat – it was one to have me arrested for a crime yet to be announced – a threat boiler rooms have carried out successfully in Thailand and the Philippines.


Its worth reading the full report. In a nutshell very little truth is coming out of Thailand at present as it is almost impossible to report what the government is really up to.