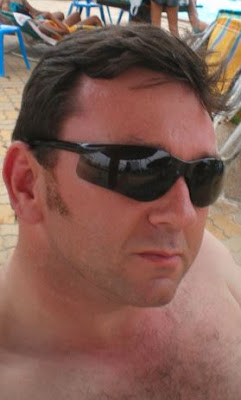 An arrest warrant was today issued for fake Scots lawyer Brian Goudie by a court in Thailand on charges which included posting pornographic video of his former 19-year-old Thai assistant in the resort of Pattaya.


The warrant was issued by Pattaya Provincial Court after Goudie, 48, from Falkirk, failed to turn up to surrender to bail.

Goudie is currently on bail appealing a three year jail sentence for posing as a British barrister and former officer of the Royal Marines to cheat a 78-year-old American woman, Barbara Fanelli, from Madison, Wisconsin out of 7.8 million Thai baht (£142,369) which included bail money for her son who had been arrested in Pattaya.  Her son Gregory Miller, 44, died in custody.

He was born Brian Gerald James Goldie in Falkirk and under this name he was jailed for six years in Australia for stealing some AUS$400,000 from his employers, a West Australian mining company.

Having changed his name the former Royal Bank of Scotland teller described himself as a Barrister with a degree from Edinburgh University and a former Captain in the Royal Marines who had been wounded in Iraq.  He was neither.

The latest charges have been brought by Ms. BK (name redacted) whom Goudie made managing director of Jimmi International a company which owned a guest house and two apartments in Pattaya and which formerly belonged to former Ulster drugs trafficker Jimmy ‘Doc’ Halliday,   Halliday’s assets in the UK were seized by the Serious Organised Crime Agency (now National Crime Agency).

Goudie secured the company by gaining Halliday’s power of attorney on his deathbed. Halliday died from the flesh eating disease necrotising fasciitis while in prison in Thailand, having been jailed for his part in a fight in a Pattaya nightclub.

Goudie transferred the managing directorship of Jimmi International the day after the bar an guest house then known as the ‘Jaggie Thistle’  was raided by police and found not to have alcohol or entertainment licences.  As a result Ms BK was prosecuted.  This act is the subject of a further charge for which Goudie’s arrest warrant was issued.

It is alleged that Goudie, who was in a relationship with Ms BK reacted badly at their split up. He posted stories on the net describing her as a US$10 prostitute and then posted a number of pornographic pictures and videos he had taken her at the guest house’, now trading as the U$15 a night Key Bar and Guest House in the Jomtien Complex, Pattaya, and also in a hotel room.
Goudie also features in the videos but his face is not shown.

“Sitting behind a computer, committing what is essentially a cowardly and criminal act, will not shield predators from the law or jail,” said Attorney General Kamala Harris following the verdict.

Last year Goudie, who has repeatedly beenconfronted about his past announced he was suing Google for allowing internet harassment against him. However no action was taken.  An attempt to use the ‘Right to be Forgotten Ruling’ by the European Union also to have articles removed from the net about him also failed in  a Thai court.

The legal agent assisting Ms BK said: “Mr Goudie has publicly announced he has enough cash to pay for bail until the cows come home so we are surprised at his non appearance. Given his history we will strongly oppose bail if and when he surrenders.”