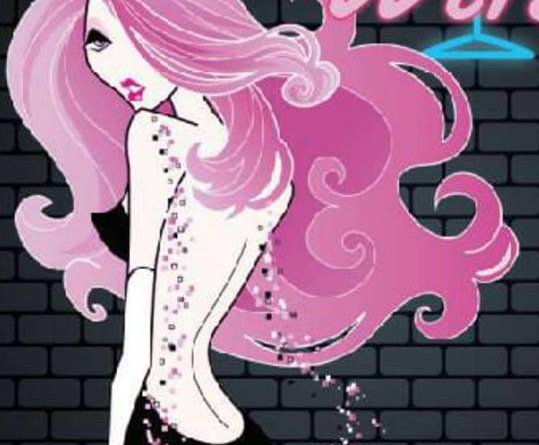 EVEN DANISH HONORARY CONSUL GETS TAKEN

The Phuket ‘Cosa Nostra’ or perhaps more pertinently ‘Casa Nostra’ team (Our house) has struck again. The same group of lawyers and officials who have been stripping foreigners of their homes on the Thai island of Phuket through their Thai wives has wrested a whole group of holiday apartment blocks from a hapless Danish businessman. 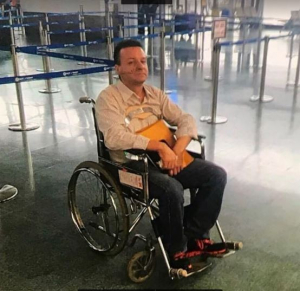 Profiteers from the case include the husband of the Chief Judge of Phuket and the President of the Law Society of Thailand (Phuket Branch).  The police chief is the same chief involved in earlier frauds, though he has since been transferred to another district.

When I say, struck again the ‘Casa Nostra’ has been striking month after month, year after year, despite assurances from police headquarters in Bangkok that these crimes would be investigated.

But the widespread shakedowns of foreigners seem to have reached a new pinnacle with the robbing of Danish property developer Michael Petersen from Sundby, Copenhagen, who lost three holiday apartment blocks and hundreds of millions in cash after being invalided when he was run down by a car in Rawai, Phuket – an act he says was clearly deliberate.

His Thai mistress Wijittra Nammata, whom he put through law school, scooped up the following:

Bayshore Ocean View apartment block. 100 million baht has gone missing from the accounts, it is claimed.. This was a 1.1-billion-baht development.

Bayshore Rawai Condo. This was a 220-million-baht project of which it is claimed has now accrued 15 million bahts worth of debts but the final total is not yet known as the accounts have been hidden.

DM Casio. This was a 35-million-baht land project funds from which were withdrawn, and the company put in the hands of a loan shark, it is claimed.

Bayshore Sea View apartment block, this was a 220-million-baht project of which it is claimed 2.5 million has been stolen from the company accounts.

And then there was his yacht ‘Thunder’. 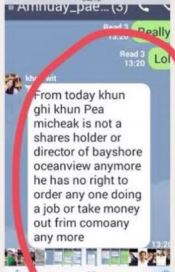 The mass thefts began after he was run down by the car.

Badly crippled, nobody picked him up and he had to crawl to his car and find his way home, a feat which took several agonising hours.

“I was walking from my car in Rawai beach to a restaurant. I saw a green car that had stopped about 60 meters away from me. So I started. Then I was struck.  I landed on my knees and hands on the road I remember the first thing I on my mind was ‘ can I still move?’ I tried to stand up but there was a searing pain in my back,  I aw the green car driving away  I see a guy with long ‘Bob Marley’ style hair look like ‘Bob Marley’.  He drove like crazy to get away. I tried to open my phone to take picture but before I even can open, he was gone.”

Once home, he claims, his mistress would not care or feed him or even take him to a hospital. He relied on a Filipino friend Dick (Diomedes De VeraTorio) to bring him food at home and eventually escort him to live on his yacht ‘Thunder’ moored in Phuket Yacht Haven. He received spinal surgery in Bangkok which included the insertion of ten titanium pins.

From there for several months he survived by getting take-out menus from restaurants and have meals delivered and set out for him on the boat.

He texted a final note to the ‘only person I ever loved’ Anne Petersen, the wife he left behind in the Philippines, 11 years previous, leaving her cash in bank accounts.

But he was persuaded by her to return home where doctors treated him for multiple strokes and he now is able to walk.

‘It’s only thanks to my Filipino friend Dick and Anne that I am alive today,” he said.

Anne Petersen has taken on the role to get justice for her husband who now loses concentration after a short period. He cannot return to Phuket, she says, because she fears for his life.

How did Wijittra do it? There was not much really much wresting to do. She did it the same way as the wives of  property scam victims Irishman Colin Vard, who lost seven properties worth over US$1 million, and Briton Ian Rance, who lost property eight properties worth over US$1.5 million, scuppered their husbands – by simple forgery, and collusion with crooks in government and police uniform and legal robes and money lenders.

But as their lawyers were parties to the forgeries, which included the signatures of the owners relinquishing their companies and fake company meetings endorsing the deals, nothing could be done, particularly as lawyers worked with local police – and local police would not proceed with criminal cases.  And then banks would not reveal to their customers how their company accounts were taken from them.

Not only were the same group of lawyers and same police involved, but the Land Office and even local officials of the Department of Business Development were in on it too.

By proving the irregularities foreigners can and have been allowed to get some of their companies back in the civil courts– but by this time they are stripped off their assets and can be massively in debt.

The courts in Phuket have now re-instated most of the companies back to the Petersens but with massive debts – and Wijittra is fiercely hanging on to such things as bankbooks and intimidating residents of the properties by sending groups of Thais to wander around.

The company DM Casio, which owned land for a golf and villa housing, had been sold to a US national. But before title was issued it ended up in the hands of moneylenders.

Having taken over the companies Wijittra has not serviced the company debts and there is a staggering 86-million-baht bank debt outstanding on Bayshore Oceanview which a court has given her two years to pay back.

Now says Michael Petersen’s wife Anne, a Filipina, they are having to take cases of embezzlement.

Other foreigners who bought units in these projects are affected – notably the Danish Honorary Consul to Phuket Soren Hede who lost 2.5 million baht when the unit he bought in Bayshore Ocean View was sold on by Wijittra to an Italian called Mauricio Bresciani, who paid the cash personally to her. This man, the Petersen’s have been informed is Wjittra current boyfriend after she terminated her relationship with a 77-year-old Australian.

Some people might consider this as ‘just deserts’ as foreign embassies and their respective ministries have totally failed to warn their citizens of the dangers of frauds from Thais when buying property in Thailand, except in the most circumspect (diplomatic?) way.

But Honorary Consuls have no say on what happens in Embassies in Bangkok. 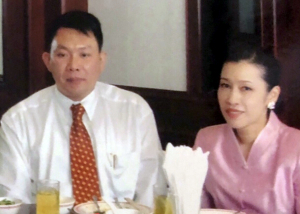 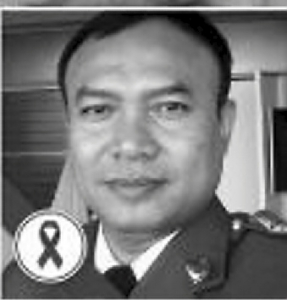 So who is making money off this?  The recipient of a brand-new condo in Rawai Bayshore is none other than Withummanad Suwangota, husband to the Chief Judge of Phuket, both pictured above.

Chonlasit Kaewyarat the same lawyer responsible for accepting forged signatures which were used to deprive Irishman Colin Card of his properties has obviously made a tidy packet.

And of course Police Lt. Colonel Boonlert Ongkan was the cop who did nothing.  They’re all Facebook friends of course.

Wijiitra’s sister Nittaya, who was also made a director of Petersen’s Bayshore Invest (now removed), has had three children from one Thai-Chinese and two foreigners.  Along the way she has acquired Bayshore Mansion from one of them.

And the two sisters can relax in their new bar in Patong Beach aptly called ‘The Trophy Wife’.

(Wikipedia: Trophy wife can be used to imply that the trophy wife in question has little personal merit besides her physical attractiveness, often unintelligent or unsophisticated, does very little of substance beyond remaining attractive, requires substantial expense for maintaining her appearance and is in some ways synonymous with the term gold digger.) 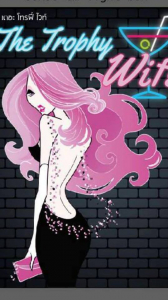 But Wijittra denied she had done anything wrong. She had helped Michael 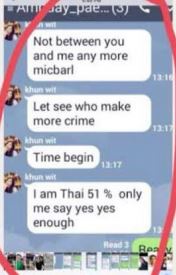 Petersen build the businesses and was a lawyer with ‘good credibility’.

Michael had had affairs with other women, she said. She took what she was entitled to. She would not comment on the fictitious company meetings, forged documents or the (apartment and land for the judge?

‘We made business together  and we amend and signing compromise agreement on 26th September 2018. All is end at Phuket court but I not know why he still not give up. He did not performance at court agreement still’

Said Anne: ‘I will expose them as long as am alive. You have no idea how much anger I have. I am never going to surrender this fight ever. At first I was mad then scared, fearing for my life. Now I don’t have any of those (feelings of fear) anymore.”

In 2015 after revelations on this site but more specifically after Irishman Colin Vard halted traffic outside the Royal Thai Police Headquarters in Bangkok in a sit-down demo Police General Somyot Pampanmuang, the then chief of the Thai Police promised a full investigation into the Phuket scams to be completed within three months. No such investigation ever revealed its findings if it did in fact take place.

BBC Bangkok Bureau Chief Jonathan Head had also followed up with a film about both Colin Vard and Ian Rance. During the film he confronted the lawyer Pratuan Thanarak who notarised a document which clearly carried Rance’s forged signature.

. But the case was eventually settled out of court.

Despite being ordered out of the business this month Wijittra was still in control of Bayshore Ocean View and telling the foreign occupants that their service charge was to rise by 62.5 per cent. 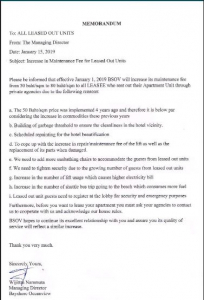 ‘Don’t come to Phuket,’ said Rance. ‘It’s not a place for foreigners.