In November 2005 Andrew Drummond and photographer Andy Chant tracked down former glamour-rock icon Gary Glitter to a house in Vung Tau, Vietnam. As a direct result Glitter was later arrested as he tried to flee the country through the international airport at Ho Chi Minh city.

He was later jailed for three years in Vietnam for child sex offences.
Andrew Drummond and Andy Chant were sent in as a team at the request of the British Sunday newspaper the ‘News of the World’. The News of the Worldsimultaneously pulled out their team who had been unable to find Glitter.

Glitter had already served time in Britain for possessing child pornography but had escaped a charge of child sex abuse because the News of the World paid the victim cash for her story. Andrew Drummond and Andy Chant had previously tracked Glitter down to a comfortable mansion on the outskirts of Phnom Penh in Cambodia.

Glitter was duly tracked and Drummond’s copy was ‘reworked’ by the News of the World’s and billed as a ‘World Exclusive’.

Drummond and Chant were referred to as ‘the investigators with the damning evidence’.

Glitter said he was framed by the News of the World. 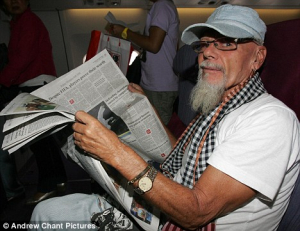 When Glitter was released from jail in Vietnam in November 2008 Andrew Drummond and Andrew Chant were the only journalist on  flights he took from Bangkok to Hong Kong and back.

Although Britain’s CEOP – Child Exploitation and Online Protection Unit – said they were in control of the situation it was actually Andrew Drummond who warned Thai Immigration that he would attempt to stay in Thailand and he was held as he tried to pass though passport controls in Bangkok.

The story of his final return to the UK and related articles are linked at the end.

The News of the World story – in the newspaper’s own inimitable style – with the byline taken by its chief reporter Neville Thurlbeck  is reproduced below, though Andrew Drummond does not recall some of the ‘quotes’ in it.

Potential charges of child rape were abandoned after he paid out US$2000 to the families of the victims.

THE BEAST ON A BIKE: GLITTER’S SICK HAREM
By Neville Thurlbeck

THIS is paedophile pop monster Gary Glitter on Saturday’brazenly riding round a seaside town with one of his 14-year-old live-in ‘wives’ clinging to his pillion. Our shock pictures are proof the sick rocker is still cruising the world in search of youngsters to satisfy his lust for child sex.
The News of the World traced the sick 61-year-old to his hide-away in Vietnam. There we discovered he had installed two underage ‘brides’ ‘ and keeps a third teenage girl as a mistress to top up on vile thrills.
On Saturday night, after realising we’d nailed him, Glitter snatched the two youngest girls away and went on the run. But our investigators’ evidence and photos are damning. One of Glitter’s neighbours in the resort town of Vung Tao said:

‘This has sickened everyone here. He has been here about a month and we’ve seen him with three different girls. Two of them have been living with him full-time like ‘child brides’ for the last two weeks. One is called Hoa and is 14-years-old. The other is called Tu and could be even younger. This man should be driven out of the country.”

The News of the World was alerted to predator Glitter’s presence in Vung Tao after he turned up unexpectedly at a music bar known as The Labyrinth frequented by ex-patriates working in the oil trade off the coast.

On Friday night neighbours saw the star lock himself away with Hoa and Tu in the luxury £750-a-month villa he rents in Tran Phu street overlooking the South China Sea. At 8am on Saturday pony-tailed Hoa emerged alone and then went back inside. Later she and Glitter came out and went on a shopping trip aboard his electric blue Honda motorbike.

The pervert seemed stressed on the trip and needed his young girlfriend to ask for directions many times. At another stop, Glitter emerged from a store coughing and clutching a thermometer. As Hoa stood by, the glam rock has-been ‘ famed for hits I’m The Leader Of The Gang and Do You Want To Touch Me? ‘ stuck it in his mouth and took his temperature on the street. Pointless exercise ‘ the world knows he’s as sick as they come.

Glitter and Hoa returned to their villa at about 3.30pm. As they walked to the front door the greying, dishevelled singer ogled the nervous-looking youngster. Then he looked furtively down the street before slamming the heavy door shut and drawing several bolts on the inside. Glitter has been reported several times as expressing a wish to return to Britain to lead a normal life. But those ‘wishes’ fly in the face of Saturday’s reality. The truth is this evil man is running out of hiding places. There’s plenty for the Vietnamese police to go on and if they pin charges on Glitter he could be kicked out of the country to face trial in the UK.

The Home Office could use section 72 of the Sexual Offences Act 2003, designed to stamp out sex tourism. But if Glitter decides to escape Vietnamese justice by running back to Britain he will be automatically jailed ‘ because he failed to sign the Sex Offenders Register before quitting the UK. Glitter’s disgusting antics in Vietnam echo a trip to Cambodia exposed in 2002.

Then he rented a penthouse in Phnom Penh where Ãƒâ€šÃ‚Â£3 buys sex with girls as young as 11. He was seen being visited by a woman and her five-year-old daughter. But local cops stepped in and booted him out of the country.

Gary Glitter is not the first paedophile in South East Asia Drummond has pursued. There have been several.  Andrew Drummond works closely with Sudarat Sereewat at the ‘Fight Against Child Exploitation Foundation. FACE.

In this picture by Andrew Chant, Drummond is seen confronting Nicholas Rabet, the Deputy Head of a Children’s Home in Islington, London, who had gone to Thailand where in Pattaya he set up his own Disneyland for kids.

And here b elow is Maurice Praill, nicknamed ‘The Ghost’ by children he has abused. He is the step-father of former Irish International footballer Jon Goodman. Goodman also played for Wimbledon and Crystal Palace. 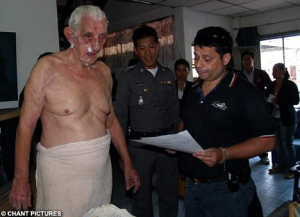 This picture was taken on his wedding day to a child bride.
Praill has been arrested several times in Pattaya but each time had avoided going to court by, according to the local newspaper the Pattaya Mail, paying a ‘small fine’ to police.

Praill was however finally convicted in 2001 in a case monitored by FACE and sentenced to 14 years for the rape of two under-aged girls.

He was bailed immediately pending an appeal. And even when he lost his appeal he appealed again to the Supreme Court.  He was arrested again in March 2007 and charged with having sex with two under-aged girls.
Finally in January 2009 the Thai Supreme Court confirmed his 14 year sentence and an astonished Mr. Praill was led off to prison.

The Thaksin Debate. Did He Jump Or Was He Pushed?

August 12, 2008 Andrew Comments Off on The Thaksin Debate. Did He Jump Or Was He Pushed?

December 24, 2010 Andrew Comments Off on Death Charges Confirmed On British Woman In Malaysia