Justine Ayling and her husband Paul took their 12-yr-old son to Thailand for a new life and to be close to Paul’s retired parents.

They designed and built their own luxury home and enjoyed the balmy weather and beautiful beaches of Hua Hin, 160 miles south of Bangkok. Close by were Paul’s parents Anita and Michael, and Paul’s brother Stephen also ran a successful building business there.

But what they did not know was that in this Royal city, where the revered King of Thailand Bumiphol Adulyadej keeps his Summer Palace called ‘Far from worries’,  murders and attacks on foreigners are far from rare, particularly when business is involved. 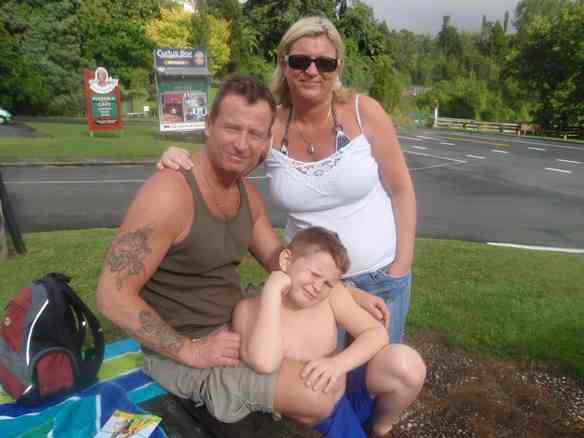 But in keeping with the city’s royal image, it is claimed, the authorities have not exactly been pulling out all stops investigating some horrific attacks in the town.

Today Paul Ayling, 48, a carpenter and kitchen fitter is in a coma from which he may never recover. Justine is trying sell their £430,000 pool villa to get back home. Her memories are bitter. The family are divided.

Paul and Justine were already planning their return home last December.  Paul had decided Hua Hin was a place for retirees, not for him. Having sold his car Paul and Justine had just taken their Scott to private school on their small step-through Honda Fina motorbike last November 21st and were returning home when two men stepped out into the road, one with a wooden club.

The first went behind Paul’s bike. The second wielded his club crashing Mr. Ayling’s skull. Paul and Justine Ayling went veering off the road covered in blood and with Paul’s brains spilling out, and the two men casually wandered off dropping the wooden club in the middle of the road.

Why? Paul’s father Michael Ayling, 69, from Canvey Island, put out a reward. Within five days he had been told the names of the attackers and who had hired them.  He is convinced it was just a warning. He is convinced the information he has been given is true. In fact he believes many people know.

Paul had been in dispute with a Thai company who had just completed a decorating contract on his house. He withheld £400 complaining of shoddy workman ship. Being in the trade himself he used a few expletives to describe their work – not an advisable move anywhere, but especially not in Thailand. 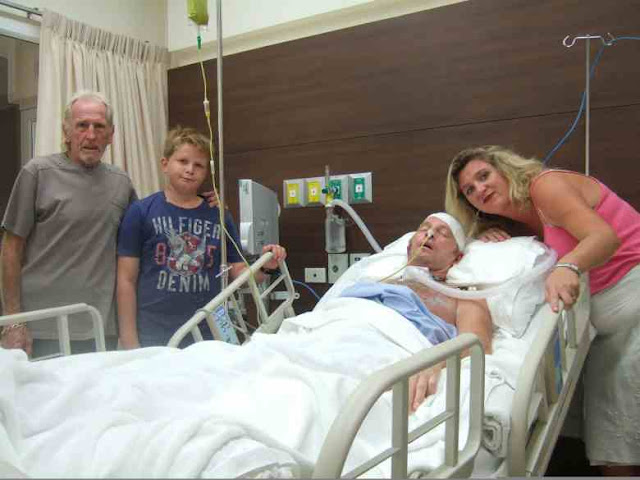 Said Justine,42 :  ‘The wallpaper had to be painted over because each roll was a different shade, and they left paint everywhere.  The carpenter also botched the job in the kitchen and Paul had to fix it himself. My husband is a carpenter and kitchen fitter himself and is meticulous about his work.  He withheld part of the payment, about Ãƒâ€šÃ‚Â£400, about one third, and had referred the matter to lawyers.’

But then she said they received an email unusually in word perfect English from the Thai contractor.

‘It would be better for you to pay us and have this finished once and for all. If you refuse to pay us we have other means to make you pay but let us do the best and soft way first. Please also pay the carpenters as they don’t know how to play soft’.

She added: ‘I held Paul in my arms. He was covered in blood. His brain was spilled out. It is difficult to believe someone would do something like this for the equivalent of £400’.

Michael Ayling passed the information on to police but he claims they seemed uninterested.  Police never did forensics at the scene of the crime. In fact they never even set up a crime scene, said Justine

Said Justine:   ‘After the attack I saw the man who hit Paul just throw the piece of the wood down in the road.  When police came to investigate they picked up, but did not wrap it up, and the last time I saw it, it was leaned against a cupboard in the police station.

“They never cordoned off the area to check whether either or both of these two men had been smoking or drinking while they waited.”

All this comes as little surprise to expatriates living in Hua Hin, one of whom refers to the town jokingly as ‘Hua Hit Man’.

But without exception they will only talk off the record about local police and politics.

Justine wrote to her local paper wishing to pay for an advertisement for witnesses to the incident.  She was quickly turned down.

This is the reply she got from the Editor, Gerard Mosselman who refused her advertisment:

‘Writing critically about crime does not help Hua Hin.  A former local foreign newspaper was closed because they criticised local developers and Thai Police.

‘We are a foreign News Media who have permission to make local and international tourist , real estate, events and other news except ..criminal and political news.

‘In addition, last week, an editor of a newspaper in Phuket was shot to death because he criticised publicly certain things he did not agree with. I hope you understand our situation. Publicising the deeds on your husband will , unfortunately, not reverse the brutal attack.’

Justine chokes back tears as she talks about the attack.’It’s hard to take this in. It was so senseless. Life is so cheap here yet in the brochures this is described as one of the friendliest places in the world.’ 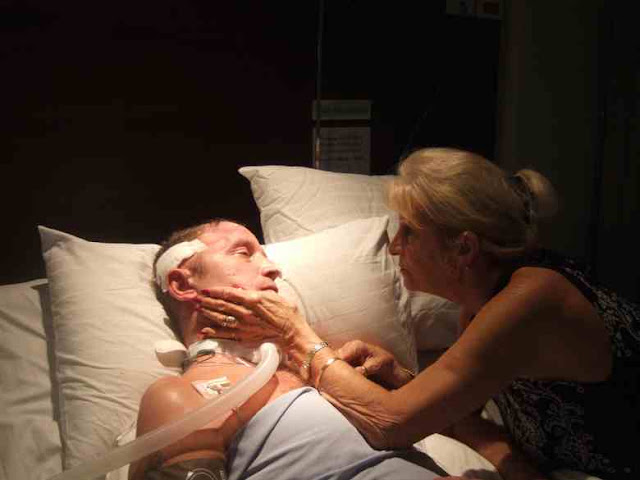 February 23, 2011 Andrew Comments Off on Poison Link To British Pensioner Deaths In Thailand