‘These British machines are falsely finding explosives in coconut trees. But people die when they give false negative reports ‘.

The Prime Minister of Thailand will this week be asked to order the  withdrawal of  British  explosives detection equipment known as ‘magic wands’  for testing amid claims they are killing members of the country’s security forces.

The move follows a similar controversy in Iraq two months ago where some 1,500 ‘magic wands’  sold under the name ADE165 by the British company ATSC were ridiculed  for their lack of capability by the US military.

Premier Abhisit Vejjajiva will be asked to act on claims that similar  machines sold under the name GT-200 have given totally false readings which have led to several deaths in Islamic southern Thailand, the scene of separatist terrorism.

‘They are falsely identifiying explosives at the top of coconut trees, but not finding when the bombs are real and people are dying,’ said Angkana Neelapaijit,  a member of the parliamentary ad hoc  ‘Committee on the south’  which will make the demand formal for the machines to be withdrawn and tested.

She added: ‘Our scientific advisors have compared the GT-200 to bomb detecting with a Ouija board.’

The latest controversy involves the Ashford, Kent, based company ‘Global Technical Co.Ltd.,’ which last year was asked by Quenton Davies, Minister for Defence Equipment and Support, to remove a suggested MoD  endorsement  for the GT-200 from its website.

The Thai Interior Ministry is also promoting the ‘Alpha 6’ detector and supplying some 800 to police nationwide at 555,000 baht each -11,000 pounds sterling to detect drugs.

But ‘magic wands’ known as GT-200 used by the Thai army and sold without cabinet approval under ‘a secret military deal’, according to the Asian Human Rights Commission, are the ones of main concern, because they are supposed to detect explosives.

The units allegedly work on the principal of ‘magnetic molecular resonance’ or ‘nano ionic resonance’ and or ‘dia/para magnetism’.

The US Justice Ministry, which issued a warning about similar machines, calls it ‘Molecular Frequency Distribution’ and states in a report: ‘None of these attempts to create devices that can detect specific materials such as explosives (or any materials for that matter) have been proven successful in controlled double-blind scientific tests’.

A ‘magic wand’ tested by the US Navy called the Sniffex,  could not detect 1000 lbs of explosives at 20 feet. 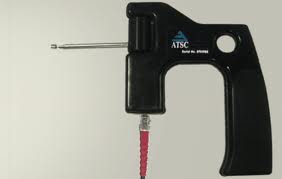 In theory the gadgets works like water diviners.  They all come with a wand which is supposed to point out whatever the operator is seeking.  If it’s TNT or C4 explosives the operator is looking for, the GT200, will supposedly point him to it. The units have no battery power but work off the power of the operator.

Slip other cards special cards into to the machines and they will detect cocaine, heroin, ice, and the drug of your choice – at 5oo metres, claim the distributors.

Angkana Neelapaijit,  also Chairman of Thailand’s Working Group for Justice and Peace said: ‘They have been compared to using ouija boards. In all cases when the machines fail the operators are blamed. The generals say the machines are good. The people who have to use the machines, the soldiers, say the opposite. They don’t work and can be deadly!

The WGJP blames the GT-200 for several deaths. In their report they claim that on October 6th last year near the Merlin Hotel, in Sungai-Golok  and October 19th at Pimonchai Market in Yala, bombs went off causing death and several injuries in a car and motorcycle, just a few minutes after the vehicles had been checked  with the GT-200  ‘magic wands’.

They also claim that on November 7th three Border Patrol officers were killed when a bomb exploded as they were investigating a suspicious object in Pattani. Again the GT-200 showed negative results.

And again in Pattani, South Thailand, when a bomb was hidden among the dead bodies of a murdered couple in Kok Pho district, officials used the GT200 to check the bodies . The equipment suggested nothing. When officials lifted the bodies up, the bomb went off, claim the WGJP

The WGJP pointed out: ‘The reading device is ambiguous and subjective. There is no clear indicator. It is vague enough to excuse the authorities’ ineffectiveness. If a false negative turns out they can just blame the operator’.

The MoD says the machines are not used by British forces and do not confirm to British forces requirements.
A spokesman said Global Technical had brought a machine to them for evaluation in 1999. But the machine was not subject to proper MOD testing. ‘The company cannot market the machine today stating the MoD has confirmed its capabilities.’

Gary Bolton of Global Technical Ltd said the company would be updating its website later this month.  Technical information provided by Global and Technical says its performance has been backed by the British Army.  However the machine cannot pinpoint explosive, rather narrow them down to an area of four cubic metres.

The full range of the GT-200’s bomb detecting capabilities as shown in Thailand. Not everybody believes the claims.

December 11, 2010 Andrew Comments Off on Culture Shock! A Thai 'Bride's' Fight For Dignity

November 11, 2012 Andrew Comments Off on A Flying Sporran Sex Survey