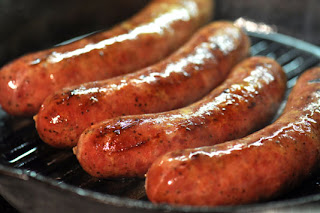 Now comes ‘Sausage Wars’ as ten years on the intense rivalry among the purveyors of the Great British breakfast seems to be heading to the courts.
While Britain reels under the horsemeat scandal and stories in the Daily Mail of ‘killer sausages’ (Apparently one in 30 people dies prematurely through eating processed meat) the world now has to wait to see if some 18 international schools in Thailand and even Britain’s prospective Honorary Consul to Pattaya Tropical Bert Elson will get their daily British bangers – referred to on ‘Yes Minister’ as emulsified high fat offal tubes.
At the centre of the latest controversy is a British, er, delicacy, known as the ‘Fat Boy’ or ‘Cumberland Fat Boy’ sausage.
Apparently this sausage in Thailand was pioneered and copyrighted by Wayne Faulkner-Harper, 67, a Dudley, West Midlands, based butcher, who worked in Thailand amongst others for Tesco-Lotus, and the Central Group, meat departments.
Wayne seems to be a bit of an old pro. He has a website www.allmattersmeat.co.uk
It seems some of his former associates have run off with his patented product and many Brits who of course come to Thailand chasing cheap ‘beer’ and ‘birds’ may luck out on the comfort food that keeps them going.

He is seeking compensation.

Top of the list are Asia West Foods Ld., who have been selling Cumberland Fat Boy sausages to Big C, and possibly Lotus.
They are based on the outskirts of Bangkok and have strong connections with the colourful Eclipse Group, which has been running restaurants and bars and nightclubs in Bangkok and has very strong connections to the ownership of Nana Plaza Entertainment Plaza of sexual titillation.

They also supply 18 international schools in Bangkok.
And then come KPK Food Service, from Pattaya. 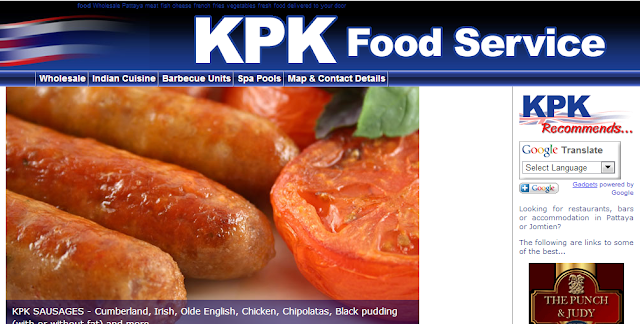 Letters issued by lawyers of Mr. Harper, who copyrighted his products while the boss of the Western Wholesale Meat Company, demand that these companies remove all mention of ‘Fat Boy’ from their products, and letters seeking up to 5 million baht each in compensation.
Said Wayne Harper: “My lawyers are confident of winning in court.”
A spokesman for Asia West Foods said: “The matter has been passed onto our lawyers for consideration.”
As the report below shows, a version of which appeared in the London Times, the Embassy was quick to point out that they bought their bangers elsewhere.
Fists fly guns drawn as Brit pie sellers engage in turf war in Thailand.
August 28 2001
Thai Police have intervened in a turf war among British pie sellers in Thailand after fists flew and guns were produced at a showdown in the beach resort of Pattaya.
One man has been  arrested and bailed and the ‘pie men’ from Birmingham and Bradford have been ordered to cool it in a trade dispute over who supplies sausages, pork , chicken and meat  pies, and Cornish pasties to the thousands of British tourists at the beach resort.
Armed police from 100 miles away in Bangkok intervened in the dispute last week between, on one side, the ‘Simple Simon’ pie company owned by Brian Fewtrell, and Wayne Faulkner Harper from Birmingham, and on the other Robin Wallbank, 62, from the Royal Oak meat pie company of Bangkok.
Last night Mr.Wallbank who received a black eye said:

“Suddenly the pie business has taken on an ugly side. I have been in Thailand selling successfully for over ten years when all of a sudden it seemed like the Mafia was moving in.”
“I did not have any time to say anything. I was grabbed round the neck and then thrown to the floor. I saw one of the ‘Simple Simon’ men standing over me ready to smash me with a snooker cue.
“Just then police broke in drew out their guns and pressed them to the temples of my adversaries. I had reported the matter to a colleague who was a policeman but I wasn’t expecting such drastic action. However I am thankful they intervened”.

“It was all a misunderstanding. I don’t really want to comment. But we do not want to go to war. There is plenty of business here for us all.

“When police arrived I was buried under a pile of them. One drew a gun and held it to my throat. It was scary. Even a reporter from the local English newspaper ‘The Pattaya Mail’ ran off when he saw what was happening.”

Pattaya police said that Ray Rose, 59, a former London massage parlour operator, who now runs the Jigsaw Pub in Jomtien, had been arrested and bailed in connection with allegations of assault, and licensing irregularities. Mr. Rose had a contract to sell ‘Simple Simon’ pies.
A local British pub owner said:

“It’s a storm in a tea cup which got out of hand. ‘Simple Simon’ had just started up and had announced they were going to wipe out all the opposition.

“They should settle the matter by throwing pies at each other not with fists and guns.”

A British Embassy source said: “The pies in our canteen come from another source so we will not be affected.”