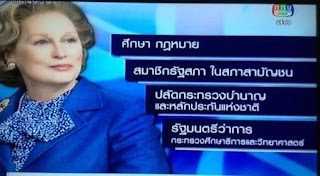 How can I let the death of former British Premier Margaret Thatcher pass without a word? Well easily actually.


But I thought at least I would congratulate Thai TV Channel 5 for using not a picture of Maggie but a picture of Meryl Streep, who acted the part of Maggie Thatcher in the film ‘Iron Lady’.


This is so much kinder than some publications, which used the ‘Spitting Image’ version of the woman almost beatified today by the London Daily Mail, but was topped by Taiwanese television which used a picture of Queen Elizabeth II.

I have no personal feeling towards this British icon.  I was not sent to the Falklands conflict the winning of which enabled her to become one of Britain’s longest serving Prime Ministers. I was at the Ministry of Defence press conferences in Whitehall hosted by the MoD’s chief press officer Ian Macdonald.

News in those days, particularly that coming out of the South Atlantic, could be controlled, so the whole country became a trifle jingoistic…not that of course it was not a bad show.

I also was around reporting at News International at the time of the Miners’ Strike – but luckily escaped duties there too – as colleagues nearby tried to label it a commie revolution.

But I could not avoid Thatcher’s support of Murdoch during the Wapping Industrial action.  That’s when I took my leave.  I spent one day on the picket line and packed my bags for a round the world trip for the C4 UK – in those days travelling first class. 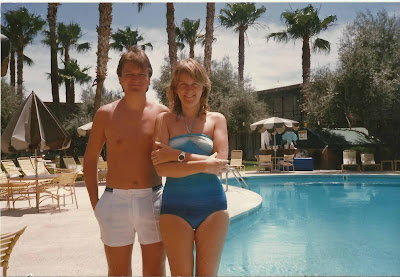 But she followed me unfortunately. By deregulating the financial industry she managed to throw one last knife in my back.

Margaret Thatcher was aged 87.  Many of us I fear will not get there. RIP.

Of course I no longer look like the person on the left above here on that trip with my producer in Phoenix, Arizona.

This is, well yonks ago, but there is one picture I cherish, which came at the end of the trip. After filming in Penang – the film was about a Briton who was executed there – I took R & R in Phuket. 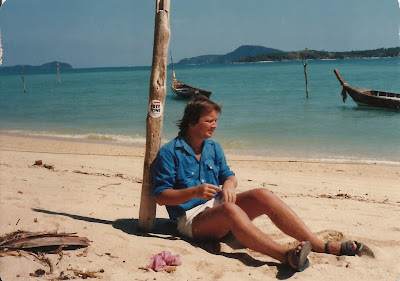 This was of course at a time when the Wapping Strike was at its most violent and printers and journalists were trodden under hoof.

Still I did do my bit. Look at the sign on the post I am leaning against. 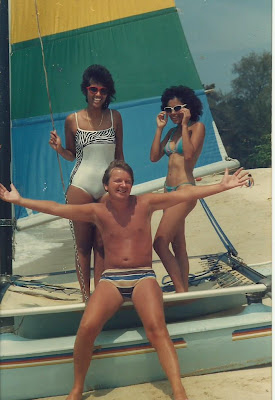 And finally, in a desperate attempt to show that I once  had got what it takes, here’s a picture taken in Penang while filming ‘No Man Wants To Die‘.

And if anybody is thinking ‘Did he get off with one of those two?’ the answer is no. But we had a few ‘jybes’ and ‘ready abouts’.

Inevitably I had to get back to blighty and the company’s yacht outing (below) while still on strike pay.

I returned of course and missed the ‘loadsamoney’ period which came before the recessions.

But some people tell me its not a pretty sight. 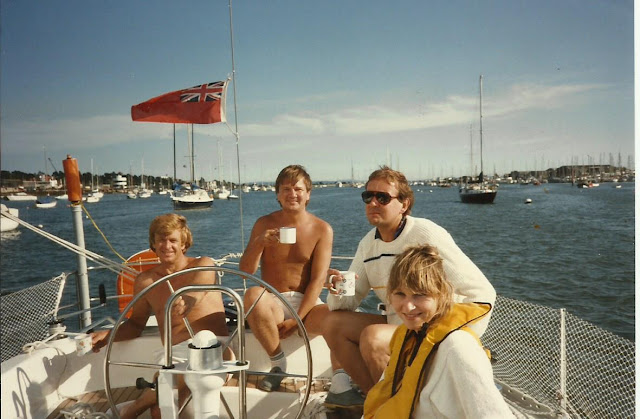 July 14, 2011 Andrew Comments Off on Get Thai Wife To Watch Her Husband Being Beheaded Said News Of The World

High Treason And The 'Feckless' At The British Embassy

November 25, 2010 Andrew Comments Off on High Treason And The 'Feckless' At The British Embassy

Paedophiles Fight Back In Thailand

June 16, 2009 Andrew Comments Off on Paedophiles Fight Back In Thailand