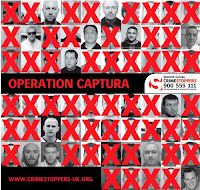 Thailand, the United Arab Emirates, and South Africa are now the countries of choice for British villains seeking a bolt hole in the sun, according to David Allen the head of the ‘Fugitives Unit’ of Britain’s Serious Organised Crime Agency.

Following a series of arrests in southern Spain, known as Britain’s ‘Costa del Crime’, under Operation Captura.(I’m not going to translate that) British villains have had enough and Thailand is, of course, at the top of the list.

Allen’s comments are backed by former bank robber Jason Coghlan, who set up a law firm JaCogLaw to help criminals in Spain. Jason says he is planning to open up an office in Bangkok, to deal with the extra new business.

He told the Guardian newspaper in London:

“If you’re a villain on the run in Spain, you’re just in a queue waiting to get nicked. What a lot of them don’t realise is that the Spanish police can even trace where your emails are coming from. Being on the run is no life – and it’s no life for the family of someone on the run. Some of them think that, with the passage of time, their sentences will be reduced. But the sentences don’t go away.”

And he told the Daily Telegraph:

“Quote me on this – Spain is singularly the worst place to go on the run.”

Jason Coghlan is the elder brother of Arran Coghlan, The Teflon Don – thrice accused of murder, thrice acquitted – and he has a colourful criminal career in his own right.

He was a Category AA prisoner, a category reserved for extremely dangerous villains and terrorists.

Two years ago while keeping out of a rival drugs gang war in Manchester Coghlan made Thailand his home.

For a while he acted as an enforcer for Hua Hin property developer Dingeman ‘Dinky’ Hendrikse, putting uppity complainants in their place.

He took a house at the entrance to an estate then called ‘Avalon’ and took pot shots at inflatable sharks in his swimming pool to drive home his point.

He and Dinky fell out. Dinky did not appreciate what it was like to hire a man of Jason’s special talents. Coghlan ended up on the side of the homeowners.

His house was however raided by armed police from of all places Pattaya on the other side of the Gulf of Thailand after some sort of tip off. Looks like they were looking for a shoot-out and reward.

They probably thought they were on to a winner.  Jason turned up in Bangkok got into my car loaded up with a computer – then bob’s your uncle – the disc went into the Saen Saeb Canal.

The pleasures of home buying in Thailand.

I spoke to Jason a couple of week’s ago. He is now engaged to ‘Filipina singing sensation Stephanie Naplaza’. (He may have left out an Na there) I forgot to ask him to provide the ten best reasons why British crooks like Thailand.

But a clue may be in the following from the Telegraph and that British criminals are now subject to pan European arrests:

“In the 1970s it was okay because there was no extradition treaty. But nowadays there is lots of police attention, both British and Spanish. You might as well hide in Norfolk. Spain is not an imaginative choice at all, but then again, many villains do not have much imagination.”

It is a far cry from the old days, which Mr Coghlan himself caught the tail end of in the 1990s, when he would regularly head out to Marbella to spend the proceeds of his crimes, blowing tens of thousands of pounds in just a few weeks.

“Back then I felt like a king, and it felt safe to spend money there,” he said.

“There was a place where you could hire Ferraris for £600 a day, and the women were experts at parting you from your cash. I loved the birds, and I’d buy them whatever it took – jewellery, clothes whatever – just so we’d look good when out at night.

“But the Spanish police back then were a different breed, and you could still offer them money to get out of serious situations. Act all flash these days, and you’ll soon get into trouble.”

BRITISH ‘SPY’ ON THE RUN FROM THAI AUTHORITIES

February 28, 2013 Andrew Comments Off on BRITISH ‘SPY’ ON THE RUN FROM THAI AUTHORITIES