Thai Prime Minister Yingluck Shinawatra dissolved parliament today as tens of thousands of ant-government protesters converged on Government House in Bangkok in the ‘protest to end all protests’.

Yingluck who had offered to hold a referendum finally gave into pressure as the city became clogged with whistle blowing flag waving protesters converging from nine different points near the city’s boundaries.

“When there are many people opposed to the government from many groups, the best way is to give back the power to the Thai people and hold an election. So the Thai people will decide,” she said. 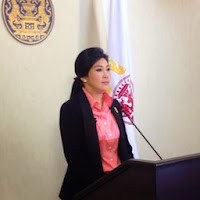 Her move followed the walk out of Parliament of 159 members of the opposition Democratic Party led by Eton and Oxford Educated Abhisit Vejjajiva.  His members, said Abhisit, had joined the protest.

“This government had deceived the people. They do not intend to rule by law and will ignore court rulings. They have to go.”

While Yingluck Shinawatra held parliament by a massive majority. The belief that her brother Thaksin Shinawatra is actually the running the country, has divided the nation.

Thaksin Shinawatra, who is exiled in Dubai, after being found guilty of corruption offences, has continually broadcast into Thailand, but denies he is running the country.  Yingluck has made 41 foreign trips since being voted into power.

The ruling Pheu Thai Party, supported by the Red Shirts, predominantly from Thailand’s North East, should be able to win the majority of seats.

But political analysts say that they would need to stand without Yingluck Shinawatra, if the government wishes to avoid a repeat of events in Bangkok over the last 10 days.

The resent protests were sparked by the government trying to force through two bills.

The first would give an Amnesty to Thaksin Shinawatra, and the second would, against the constitution, change who was eligible to be a senator in Thailand’s upper house.

The attempt at passing the Amnesty Bill also angered many red-shirts, as it also gave blanket absolution for the Abhisit’s government decision to use the army against them in 2010 when many of them died.

Suthep Thaugsuban had promised today would be the ‘protest to end all protests’. There were fears of major bloodshed.  But the dissolution of parliament has taken away much of the sting even though Suthep has publicly stated that the protest movement would not end there.

Yingluck interview with the BBC’s Jonathan head – before she changed her mind.

COMMENT: I’m waiting for the international media to open themselves to the possibility that this was just not simply a mob organised by the ‘elites’ being goaded into anti-democratic sentiments, which does not sit well with the BBC, (Jonathan asks Abhisit: ‘Are you not ashamed?’ ) but that in fact Thais ARE becoming more politically aware and are sick of voting kleptocratic governments into power. Anyway that’s what my kids’ reserve nanny says (well not the word kleptocrat per se)  and she treats them like a benevolent despot and is off on the demo today. She’s from the North East btw (of course I may not be paying her enough).