Fake Lawyers Fake News Fraud Property Scammers
July 25, 2013August 16, 2018 Andrew 1123 Views Bang Kao Bay Residences, Brian Goldie, Brian Goudie, Drew Noyes, General News min read
Following appeals Google has restored stories which were previously blocked on
this site pending investigations of copyright complaints from two phony lawyers Brian Goudie and
Drew Walter Noyes.
Drew Noyes, former publisher of the Pattaya Times, who has
now withdrawn claims that he is an American lawyer, had claimed pictures used
on this site were taken from his camera of him at his request and were stolen from
him.
The claim was vehemently denied, more over publication of pictures taken from the Pattaya Times was in the public
interest and used to illustrate the activities of the newspaper. Noyes had a fraud judgment against him in the United States.

Brian Goudie acting on behalf of Bang Kao Holdings Ltd.
claimed the pictures of the Bang Kao resort, were the copyright of his
company.  Andrew Drummond accepted that
the pictures were the company’s copyright. But they were published publicly and
distributed to the public as a true image of what the resort would look like.

Andrew Drummond claimed that the pictures were of a resort promoted and offered for a sale by a man who had convictions for fraud, and falsely claimed to be a lawyer. It was in the over-riding public
interest to warn would be buyers of the serious possibility that such a resort, which boasted a
marina, might not be built or later offered as described, and that they should therefore use due diligence. 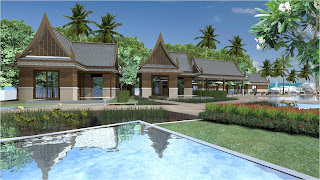