“All these documents are made up. They have been faked by that man Mr. Drummond.  I am not going to accept any documents without a government stamp”.

Mr. Noyes, 57, was giving evidence in a libel prosecution brought by himself and British-Australian David Hanks. 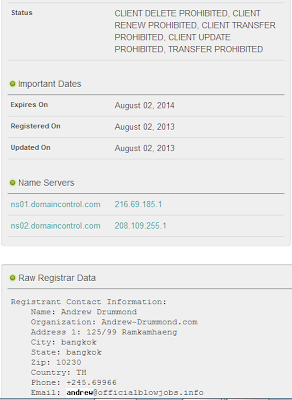 He spoke in a loud voice, close to shouting, after being shown a ‘Who is’ search which showed he had reserved the internet domain ‘officialblowjobs.info’ under his own address.

“I have the proof. I have the proof!” he said asking David Hanks to get it. Hanks returned with the latest ‘Who Is’ entry which shows the site has indeed been transferred to a Mr. Andrew Drummond, but the telephone numbers and address given for him are false.

At one point during the trial the judge said: ‘I remember. You’re a lawyer aren’t you?’

Drew Noyes did not initially answer the question (Comment: As he did not immediately answer most questions) saying he was of course not allowed to practice law in Thailand but he had attended many law seminars and had even organised a Law Seminar for expats in Pattaya.

He said he and his team of experts gave advice to foreigners and his lawyer (he then pointed to his counsel ) then handled the cases.

Later he was asked: “But have you attended a law academy?’

“What you do you mean law academy?”

The judge intervened: “Have you any legal qualifications?  Have you a degree?”

“Do you have a law degree? What is your degree for?”

Continuing his evidence Noyes said: “Your honour you must understand I do not care about Drummond, but I am a family man with children and I have been called a pimp.”

Asked how many children in Thailand he replied eight by three different mothers only one of whom he had married.

Drew Noyes who launched the ‘Pattaya Times’ newspaper   and David Banks are suing Andrew Drummond for libel over comments by a poster on his site called Elizabeth Saunders who summed up Niels Colov, CEO of the Pattaya People and David Hanks as pimps adding the ‘Pimp Noyes’ was associated ‘with mia nois’ (mistresses) and the Buffalo bar.

Noyes was shown a picture from the Buffalo Bar website which showed him with his arms around a bar hostess. He refused to identify himself.  “Drummond probably photo-shopped it “he said.

He said that he did have a girlfriend (Anchalee) by whom he had a daughter. But he had looked after his daughter and bought his girlfriend a house and a car. He said he had recently taken her to court in Chonburi so he could get joint custody of his daughter. 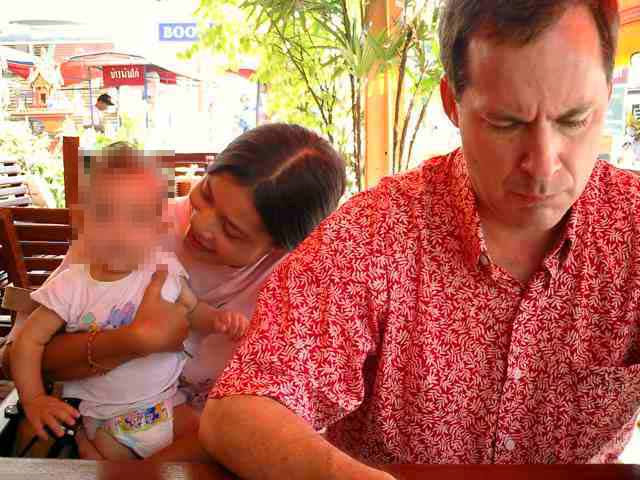 He refused to accept a private eye report detailing criminal summonses issued against him in the United States and cases brought against him by the tax authorities. He insisted he had no criminal record and had paid all this taxes.

A case brought against him for extortion, he said, was a plot by Drummond and Dr. Michel Goulet the proprietor of the Thonglor Clinic. It was all lies, he said. “I am taking 40 more cases against him and i am suing in Koh Samui.” 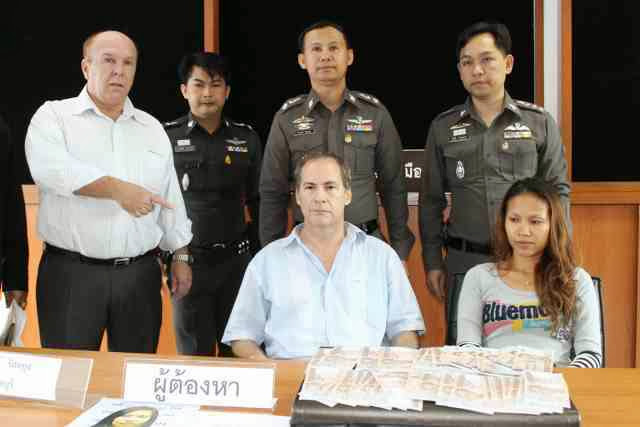 Earlier David Hanks had told the court how disgusted he was that Andrew Drummond had sent two reporters to see his younger sister Margaret McCulloch, in Girvan, Scotland.

Asked why she stated that she knew he had run a brothel in Melbourne but did not approve, he said: “She was confused.  She is an old lady. What a disgusting thing to do.”

He admitted he had a licence from the state of Victoria to run a brothel called the ‘Masquerades’ but said he merely leased it out to Chinese. He made his money from plastic.

He said: “I have a licence from the Australian government for safe sex rooms.”

But he insisted: “My girls all worked voluntarily. They are over 18. Their passports were not taken. They were not beaten. They were free to come and go. No-one forces them.”

He insisted that a pimp was someone who forced a girl into prostitution and when he was shown the Oxford Dictionary definition that a pimp was a person who lived off the profits of women who sold their bodies for sex he said: “Every dictionary is different.”

Bangkok Adultery Fugitives To Feature on LOCKED UP ABROAD

June 13, 2011 Andrew Comments Off on Bangkok Adultery Fugitives To Feature on LOCKED UP ABROAD

British Thug Fails To Make It To Pattaya Banana Boat

December 3, 2012 Andrew Comments Off on British Thug Fails To Make It To Pattaya Banana Boat