WHAT NEXT FOR BATTLING AUSSIE MUM?

Two rich kids, who were charged in connection with a vicious attack on an Australian student in the Green Mango Club in Koh Samui and who then signed a fictitious lease for an apartment on the island to show they were not a flight risk,  were given their passports back anyway by a Koh Samui court today.

Chinese-Americans Raymond Tony Chang, junior, aged 18 and Ryan Yun Shang Wang, also aged 18, were given permission to leave to attend the beginning of the first semester of their respective American  Universities – Cornell and Purdue – and undertook to return to Thailand by September 3rd.

The attack took place on Koh Samui when several different international school groups were holidaying after graduating from their respective schools.

Wang and Chang had graduated from the Shanghai American School. Jack Hansen-Bartel, a scholarship student, had just graduated from NIST – the New International School of Thailand.

Annie Hansen, mother of Jack Hansen-Bartel, who was severely injured in the attack and had to have bone and skin grafts in treatment which will last another year, said she was shocked by the decision.

“An order was made that we would be notified of any changes of their bail conditions so we would be able to appeal but we have not been informed. These boys previously sought bail so they could study and also attend their grandmother’s memorial service. But pictures show that Raymond was gallivanting around South Africa.”

On their return to Thailand they were asked to surrender their passports.

Raymond Chang is the son of Raymond Nobu Chang, a high flying executive and former CEO of several companies, who is due to attend the John F Kennedy School of Government at Harvard, Mass.

#RaymondNobuChang has rented a house in nearby  Lexington.

(In 1996 a Raymond Nobu Chang gave $300.000 to the March Fong Eu Aaa Committee. March Fong Eu was the first Asian American ever elected to State Constitutional Office in the United States. In 1966 she was elected to the California State Assembly campaigning against pay toilets (on the basis woman had to pay and men did not). She quit politics due to poor fund raising in 1987 and because her millionaire industraialist Singaporean husband failed to be frank about his business interests). She went on to become US Ambassador to Indonesia – wiki)

Chang had earlier told the court that in 2000 Fortune magazine had tipped him to be one of the 25 next generation future Global leaders under 40.

A document obtained by this website shows how Raymond Chang and Ryan Wang signed a lease agreement to rent an apartment on Koh Samui from the Thai law firm Limcharoen*, which has featured on this site in the past. 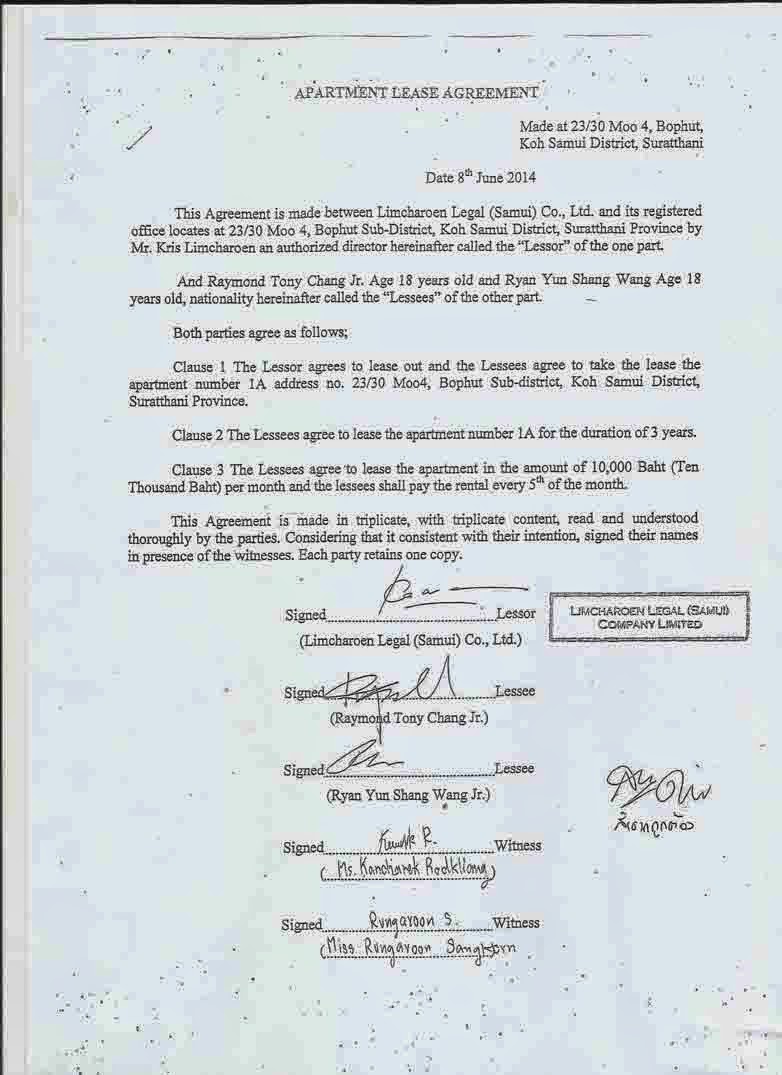 The document was dated June 8th – a day before the attack on Jack Hansen-Bartel. But checks at the address show no apartment. The address is actually the address of the offices of Limcharoen Legal.

But then again they might not want to rent a real apartment for three years when for the next three years they are meant to be at university in the U.S?

Further statements made by Wang and Chang in order to get bail show how they claimed they had rented property here because they loved Thailand so much.

It appears they changed their plea in the latest application to simply state they needed to go and study now.

The National Council for Peace and Order said it was monitoring this case because they wished to support foreigners as well as Thais and re-assure the mother of Jack Hansen-Bartel there would be transparency.

The two Chinese Americans are claiming that they went to the aid of a damsel in distress a New Zealand-Japanese girl who had graduated from the International School of the Sacred Heart in Tokyo. They alleged Jack Hansen-Bartel was molesting Miss X who had been a holiday girlfriend of Wang.

However visual evidence obtained by this site shows quite a different scenario with her intertwined with Jack.

Jack claimed he had no further interest in the girl after an earlier confrontation when Wang literally grabbed her off him stating she was his girlfriend.

“I had no idea she had a boyfriend and she had not told me. I left very quickly to join my friends. The attack came later.”

This young woman who is now studying at Fordham University, New York, is a key witness in the case.

.Mrs Hansen said tonight that she was considering what steps to take to ensure justice for her son. 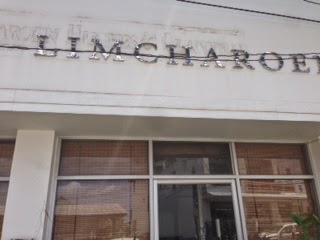 * Directors of the legal firm Limcharoen which is on the British Embassy lawyers list was the company which took over the Emerald Palace in Pattaya, the previous owners of which had taken cash from buyers and then mortgaged the property to the Kasikorn Bank. Limcharoen told the buyers they had to buy off the bank loan. Many did but those that did not and whom we connected with lawyers have been winning their cases in the courts and getting their property title deeds.

ARE PROMISES BY THE SAMUI COURT BEING HONOURED?