American Drew Noyes, currently on trial in Pattaya in an extortion case, has pulled another fast one to drive business to his ailing One-Stop-Service Center in the Thai resort of Pattaya. 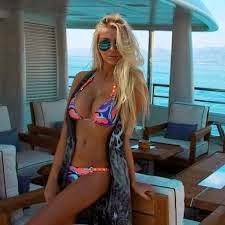 The ever desperate American, who started up by falsely claiming to be a lawyer, then ripping of a promotion for the Thai government’s One-Start-One-Stop Service Centre – pretending he was associated with it – is now trying to lure punters to his business by showing a sexy girl in a bikini as one of his ‘satisfied’ customers.

“Our client dreamed to get away from cold winters and high taxes in Sweden. We were glad to help her dream come true! Now she is wealthy from her online business we helped establish in Thailand and spends her time during the day on her yacht. Best of all, she pays almost no taxes, legally!”

Contact One Stop Legal Services in Pattaya Thailand to join her success,” writes Noyes on his Facebook page and on another Facebook page of his called ‘Hire Best Pattaya Lawyers in Thailand”. 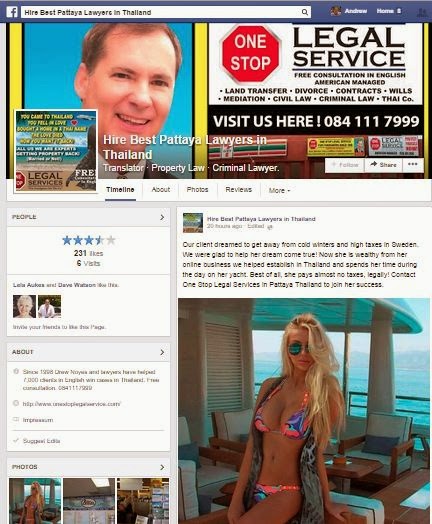 This girl is Swedish? Has an online business?  Owns a yacht?

No this is of course another fantasy from #DrewWalterNoyes, who was exposed by the Morning Star in North Carolina before coming to Thailand, he says by Royal Appointment, to work for the Bank of Thailand and save the country from the Asian economic crisis of the late 90s.

#DrewNoyes last appeared in court in Pattaya on September 23rd and September 24 on a charge with his ‘wife’ Wanrapa Boonsu of attempting to extort the Thonglor Clinic in Jomtien out of 7 million baht – later reduced to 2.3 million – on pain of a police raid on the premises – where presumably something illegal would be found and he would get a bad write up in Noyes’ now defunct the Pattaya Times.

So who is this girl – well for starters she Russian. If she has an online business,  according to one website, it must be for ‘personal services’. She does not have her own yacht and she pays no taxes in Pattaya because she has no business there. The Russian tax rate is 13 per cent but then again Noyes has businesses and does not pay taxes either.

In fact this picture has appeared on scores of websites and is available to any lonely old American who wants to salivate in the early hours and google ‘Chicks you want’.

The only truth in his claims was that business is falling off with Chinese, Russian and Korean tourists, replacing English speaking westerners, who are more gullible.

The funny thing about Noyes latest Facebook forays is that they were liked by David Watson, the famous UK Independence Party candidate from Basingstoke, Hants,
Watson  left during the last election and was in Thailand to hear he had come in second. He has settled with his last Thai wife and is now back in Pattaya with a new love. Hie is in Pattaya because, I presume, he does not like being outnumbered by foreigners.

Above Katyushka – traditional version – Below the new dance version

Forget Central World I AM COMING FOR YOU

November 3, 2011 Andrew Comments Off on Forget Central World I AM COMING FOR YOU