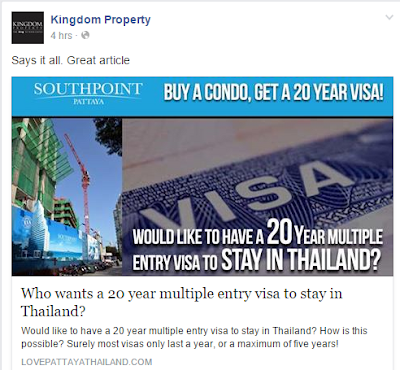 The mass market English language sites in Thailand appear to be going ape over a sales gimmick by Nigel Cornick of Kingdom Property giving people who buy property in his company’s Southpoint condo in Pattaya a 20 year visa for Thailand – courtesy of Thailand Elite Card.


The story has been running on ThaiVisa.com and Coconuts but I have not seen much in the mainstream media.

But this is quite earth shattering news.

Even if foreigners have a Thai wife and children they still only get a one year visa and each year they have satisfy the authorities that the marriage is real.

Thailand Elite of course was the brainchild of Thaksin Shinawatra, the Prime Minister, hated most of all by the current military led government.

There’s something quite clearly going on behind the scenes here. Here’s what appeared on ‘Coconuts’ and it sounds very much like the Kingdom Property Press Release.

“In what is the first initiative of its kind in Thailand, one property developer has partnered with the Tourism Authority of Thailand to offer 20-year visas to foreigners who purchase one of its Pattaya condominiums.

Buyers at Kingdom Property’s Pattaya Southpoint development will be entitled to a 20-year visa, which amounts to five-year, multiple-entry visas which can be renewed every four years.

The visa will entitle its holders to benefits including fast-track immigration clearance, assistance with driving licences, discounts and a bilingual helpline.

‘The long-stay solution will overcome many of the barriers that we see when selling our properties overseas.

Generally unless you have a business visa, retirement visa or marriage visa, you are not permitted to stay for any length of time,” Nigel Cornick, Chief Executive Officer of Kingdom Property said. “This exciting partnership is akin to Malaysia’s My Second Home (MM2H) program and has massive potential.’

The visa will come as part of the purchase of a unit at Southpoint and owners can sell the unit and the visa together if they wish.

“The target demographic for this initiative is very wide,” Cornick added.

The Thailand property-with-visa initiative is only applicable to Kingdom’s Southpoint project now, but given the possible impact on overseas buyers, it may not be too long before other Thailand property developers adopt similar initiatives for their developments.

The promotion is made possible by Thailand Elite, which is fully owned by The Tourism Authority of Thailand, which, in turn, is under the control of the Thai government.
“As part of the Tourism Authority of Thailand, this exclusive club has access to privileges that money alone cannot buy,” its website explains. “Thailand Elite is the world’s first country membership programme with benefit for immigration, leisure, business, and much more.”

“The fact Thailand Elite is working with Kingdom Property is a sign of confidence in itself,” he said.

Southpoint Pattaya is a two-tower freehold condominium in Pratumnak. It boasts 655 units ranging in size from 30sqm to 97sqm. Completion will be in the second quarter of 2016. 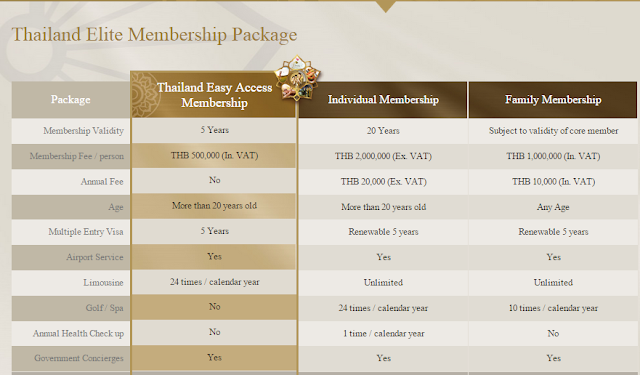 Let’s get a few things straight.

Funnily enough I cannot actually find this offer on Kingdom’s website Southpoint pages though it is on the company’s Facebook page along with a cop in the line-up at a press conference.

If this was in the mainstream press I think some Thais would have something to say about it.

I then checked this site lovepattayathailand.com which is recommended as a good read by Kingdom Property.

“Kingdom Properties have joined forces with Thailand Elite in order to create this unique offer. The 20 year visa is in fact a 5 year multiple entry visa that is renewable 3 times, thus giving you a hassle free stay in Thailand for up to 20 years.”

Oh I see. Not such a good deal then. You can rejoin Thailand Elite another two times.

The only one we’ve seen so far is that if you sell your condo at Southpoint, you lose your 20 year visa. This is because the visa will come as part of the purchase of a unit at Southpoint, but you can sell the visa to a new owner with the unit as a part of the deal!

Oh come on Nigel. You can’t lose a 20 year visa you never had!

All condominiums in Thailand have 49% foreign quota and 51% Thai quota. Is it possible to by a unit at Southpoint in Thai company name and still qualify for the 20 visa? Yes, as company director with company ownership of a Southpoint Condominium it will be possible to apply for the 20 year visa.

Nigel Cornick, Chief Executive Officer of Kingdom Property, said: “The long-stay solution will overcome many of the barriers that we see when selling our properties overseas. Generally unless you have a business visa, retirement visa or marriage visa, you are not permitted to stay for any length of time.”

Oh dear. But the average foreigner does not have a Thai company.  And isn’t what he is suggesting technically at least against the law?


Does that mean he will have to set up a dormant company with Thai nominees- the old but very unsafe game played in Thailand – because that is what a lot of people who have been robbed of their fortunes have done.


The target demographic for this initiative is very wide – and clearly very dumb.