The Secretary of the Lions Club of Bangkok (310D Silom) and former hostess at the Buffalo Bar in Pattaya has been given a one year prison sentence and fined 10,000 Thai baht by Pattaya Court for libeling an assistant to foreign correspondent Andrew Drummond, owner of this site.

Kanokrat Nimsamoot Booth had taken cases against both Drew Noyes and Warichaya Pharawet after allegations appeared on her Facebook page and Google+ defaming her in a manner which took the form of a vendetta. Noyes had been acquitted at an earlier hearing. 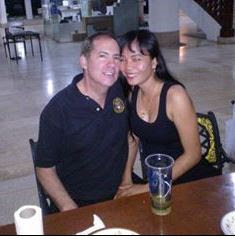 It was abundantly clear to many that Noyes was the man behind the false allegations, which included an allegation that Drummond, who conducts investigations against foreign criminals in Thailand, was Ms. Kanokrat’s boyfriend,

Ms. Warichaya was previosuly not known to either Ms. Kanokrat or Andrew Drummond.

#DrewNoyes was involved in an active internet campaign against Andrew Drummond who had exposed his murky past in the United States and published complaints from foreigners who had been cheated in Thailand.

But the Pattaya court earlier had acquitted Noyes of involvement and Warichya was left to face the charges alone. Noyes had published pictures of himself dining with Pattaya Court judges and had announced he was writing a book with the Chief Judge of Chonburi.

Other allegations were made against Ms.Kanokrat in relation to her former husband, and even a false web page (purporting to have been made by the husband) appeared on the net – Noyes is notorious for creating web pages against his enemies and other victims have included old colleagues on the Pattaya City Expats Club,

The court on Monday took into account that Ms. Warichya – known as ‘Naam’ had no previous criminal history. The sentence was suspended for two years.

Currently their relationship is understood to be tenuous. Noyes repeats publicly that his wife is Wanrapa Boonsu, the mother of three of his nine Thai children by different mothers, although they have not formally registered their marriage.

Drew Noyes is currently on bail appealing a conviction for extortion and two year jail sentence with Wanrapa Boonsu.

He has announced he is leaving Thailand next Tuesday August 4th and if so may of course have no plan to return as, he has claimed, Thailand does not appreciate his talents.

At a libel case which he lost against the owner of this site – who published a picture of Niels Colov, leader of Pattaya Police Foreign Assistants and CEO of  Pattaya People Media, under the caption ‘ Been to Jail’ together with Drew Noyes and #WanrapaBoonsu under the caption ‘Going to Jail’ Noyes was insistent.

“I have never been to jail and I am NEVER going to jail,” he told the court

Noyes was being economic with the truth – just like his false biography. In fact he has felony convictions in the United States and has indeed served time, as has Brian Goudie, who was jailed for six years in Australia for fraud.

Recently the ICE (Immigration and Customs Enforcement of the Department of Homeland Security) have been involved in enquiries about Noyes who claims on the internet to have ‘FBI clearance’.

This may indicate that they would be willing to quickly extradite Noyes in the event he skipped bail.

But a number of people in various states, notably Florida, Nevada, California and North Carolina also have interests in getting Noyes into court across the pond.

In the United States he has also been accused of widespread property fraud, dodgy share dealing, and sexual harassment.

He was of course the subject of an investigation by Scott Gold, then of the Wilmington Morning Star, in North Carolina, in which he was described as a man of ‘myriad lies’.

But boss of CasewatchAsia blogspot warns oil man: ‘We know Google is hurting you. The last thing you want is a few more posts, right?’

In a separate development; a civil case for damages brought against Brian Goudie a fake lawyer from Falkirk, Scotland, who teamed up with Noyes and David Hanks, former owner of the Masquerades brothel in Keysborough, Melbourne, (AUS)  in an attempt to close down this site, was again adjourned in Bangkok after Goudie’s lawyer failed to turn up.

(It is believed she had ditched both Goudie and David Hanks, Goudie’s Scottish team mate some time ago).

Goudie made an appearance and told the court that his lawyer was involved in another case. He had come to the court despite recently falling down a set of stairs, he said.

It may well  be that Goudie expected the case to be dropped as the plaintiff Ally Cooper, an oil worker, received the following message in an email shortly afterwards. Its understood that Cooper was in an email exchange with Goudie in which he had promised to drop all cases and sue his legal representative for wasting his money.

“Sorry Hanks and I just cant believe you now.
X* and Y turned up today at Court and X swore blind her Power of Attorney has not been cancelled, and there has been no demand from you to return money, and no threat of a prosecution for fraud.

Also, the Court  wants this case settled, but at this stage if it cant be Hanks and I have no choice but to retaliate by filing counter cases for your FB and G!, which have all been printed off.

By the way you cant file a case in Thailand claiming an address in Thailand, and then claim you cant be prosceuted in Thailand because you have no address here.

So, either Hanks, you and me file an agreement on 17th August that we dont want to make any more cases and want to withdraw all current cases, and all of the writing on the internet stops or alternatively we get on and go to Court, and a whole new swathe of cases will be filed against you. 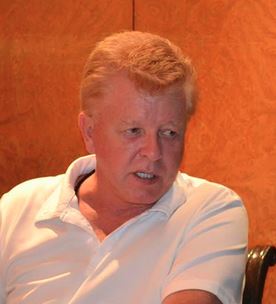 By the way * will be summonsed to confirm your contract expired, not that you were fired, we will summons immigration, Thai Revenue Department and anybody else we can think of to show you don’t live in Thailand if we have to.

We know your name being in Google is hurting you in the industry, so the last thing you need is new posts right?

So, do we get written confirmation you have fired X- or do we start preparing Court docs?

Over to you. Your response to this email will determine my next move.

*Names removed. There is no claim Cooper was fired from anywhere.


The case was adjourned until August 17.
.
Prior to then however Goudie will have to face court in Pattaya in two criminal fraud cases and Hanks faces judgment in August on a racketeering case brought against him by the Department of Special Investigations. And of course a bankruptcy hearing has been held and his bankruptcy as well as his fraudulent company, Alba Laws, and chief Thai shareholder will be formally held to account. Bankrupt foreigners are automatically deported.


Footnote: I am not sure if Goudie has noticed their irony of threatening to post more malicious rubbish about the plaintiff in the middle of a trial in which he is basically being accused of being an ‘internet warrior’.

IT WASNAE ME! SAYS FAKE SCOTS LAWYER – AH’VE BEEN FITTED UP.

December 16, 2013 Andrew Comments Off on IT WASNAE ME! SAYS FAKE SCOTS LAWYER – AH’VE BEEN FITTED UP.