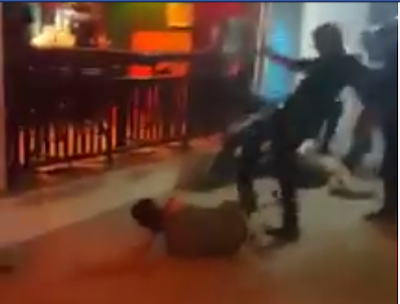 A long standing Thai practice of ‘pack attacks’ against foreigners in the country’s night life industry has been highlighted again today in a video of a vicious attack by night club guards in Phuket.

The club is not named in the video but is in Patong Beach – but it could be anywhere in Thailand.

These attacks usually happen when foreigners are rude to club staff, have insulted a Thai woman, or have refused to pay a bar bill.

They can be relentless and usually Thais totally unconnected with the incidents join in for the ‘craic’.

They are known to continue long after the victim has become unconscious, even happened to a very well brought up young relative of mine on his third day of his first trip to Thailand.

The website Phuketwan says the attack, a video of which, linked below, was put on Facebook, is up for discussion at police level.

Thailand is of course a great country to have a holiday in – just don’t let your guard down – and if you are going to have that one extra drink too much – then best to do it alone with friends – and do not be surprised if the person welcoming you one minute is your assailant the next.

If you are thrown out of a bar or club in Thailand it will not be by two burly men who will carry you to the door and tell you to get on your way – You can be the centre of an amazing spectacle outside.

There is a trend in the UK of Brits behaving badly reality TV programmes – such as ‘Night Cops’ which seems solely based around bar closing times in the UK . If you behave badly in Thailand the repercussions can be a lot worse.  Just keep smiling.

The person who originally posted the video on Facebook received threats and took the video down. However I am happy to show the Youtube version.

And if anyone sees one of these attacks – do not attempt to intervene – or if you do – ensure someone has got his smart phone running.

MICK ‘THE MURDERER’ CALLS FOR RESPECT FOR THE DEAD

January 31, 2016 Andrew Comments Off on MICK ‘THE MURDERER’ CALLS FOR RESPECT FOR THE DEAD

IN THE GRIP OF THE MAFIA