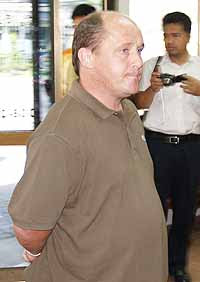 Friends and relatives of Adam Pickles the Head of English at an international school outside Pattaya on Thailand’s eastern seaboard have reacted with fury to the release of his convicted assailant on bail to appeal to Thailand’s Supreme Court.


Though it was inevitable that Sean Tinsley, who operated a Visa agency in the resort, would get bail for the appropriate cash the reaction not surprisingly has been of anger.  Adam Pickles,41, a teacher at the International School of the Regents has been in a coma since the attack in 2012.

Tinsley, 43, from Wolverhampton, who was shown on CCTV apparently boasting about the attack was acquitted at his trial. The family changed their lawyers from a duff one  on the British Embassy list, and appealed.

Just over a week ago Tinsley was jailed on an assault charge and also fined £114,000
At the time his mother Adele Pickles from Thorner  near Leeds said: ‘Justice has been done’.

Now the family want their lawyer to counter the appeal with a submission to re-instate a charge of attempted murder.   Tinsley is alleged to have attacked Adam, who was married with a young son, with a wheel brace after Pickles is said to have brushed his car scratching it.

It is common for foreigners to flee Thailand during the criminal process have paid large bail bonds and it is a common belief that the courts prefer the cash regardless.

“I don’t have any word to act on this, except what an absolute joke. Do they not see that he failed to turn up to his court date?! Where will he go this time ? Do we have any news about the conviction maybe being changed to attempted murder ? I’m appalled.”

OMG, how is this possible???

What? How does this happen? How can someone be convicted, given a pathetically low sentence and yet STILL be granted bail? Bail for what? He’s already been convicted and imprisoned. How can you serve a prison sentence on bail? So sorry to hear this. I’m disgusted at the Thai justice system. They don’t deserve tourists or visitors.

Yes, This Is Thailand. Corruption and money rule in the parts of society that should be leading the nation to a better and fairer future. Constant news like this makes me feel ashamed of living here. Corrupt Police and Army staff being moved to ‘inactive posts’ whilst still being paid after being exposed for blatant wrong-doing..and politicians working hand in hand with them. All that pain, hard work and money invested in the face of simple justice amounts to fuck all. Best thoughts and love to his family, friends and supporters.

It could take 10 years.for a supreme court judgement. By that time most people have moved on run out of cash or died. Its the Thai way……Thai and justice is an oxymoron..

LEAKED REPORT SUGGESTS BOTH HANNAH AND DAVID FOUGHT OFF THEIR ATTACKERS

September 17, 2014 Andrew Comments Off on LEAKED REPORT SUGGESTS BOTH HANNAH AND DAVID FOUGHT OFF THEIR ATTACKERS