IS IT IN HIS GROIN OR IN HIS SIDE – FAKE LAWYERS AFGHANISTAN WAR WOUND? 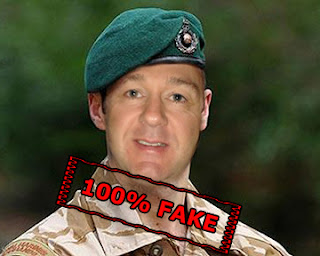 In this video ‘Brian Goldie makes his television debut. An investigation team put the thread of Goldie’s life of extortion together from Scotland to Australia to Thailand where he is known as Brian Goudie.

This 47-year old Scot born in Falkirk has variously posed as a mining engineer, barrister and former officer in the Royal Marines and befriends people and listens to their problems before using the information they give him against them.

I have seen the full version of this film of course because I assisted the film crew but I do not think it went to air in the UK – because it was based on swindlers in Asia.

Together with another lawyer  American Drew Walter Noyes, he has made a career out of swindling foreigners in Thailand. Drew Noyes was sentenced along with Wanrapa Boonsu to 3 years in jail for extortion.

He recently boasted to this site: “I have so much cash I can stay on bail until the cows come home.”
Meanwhile he continues to try and destroy his enemies with his Google sites CasewatchAsia and AndrewDrummondWatch.