Thailand’s effort to put an end to slave labour in the fishing industry is little more then a ‘theatrical exercise for international consumption’, states a report out today. 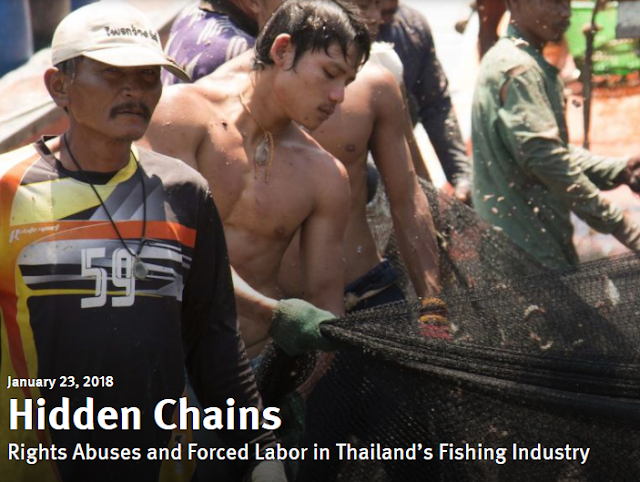 While the Thai government scrambled to create a new ordinance for the fishing industry after severe criticism both of fishing methods and trafficked slave labour by the European Union, problems remain rampant.

According to the Human Rights Watch report “Hidden Chains: Forced Labor and Rights Abuses in Thailand’s Fishing Industry,” migrant fishermen continued to be trafficked, paid under the minimum wage, while Thailand had not even passed adequate laws to punish the slave traders.

According to the statement issued in Brussels:

“Despite significant resources provided to the Thai Ministry of Labour and its departments, there is no effective or systematic inspection of fishers working aboard Thai vessels. For example, in its 2015 report on human trafficking, Thailand revealed that inspections of 474,334 fishery workers failed to identify a single case of forced labor.
“More recently, over 50,000 inspections of fishers implausibly did not find a single instance where laws on conditions and hours of work, wages, treatment on board, and other issues in the Labour Protection Act of 1998, the 2014 Ministerial Regulation, and attendant regulations had been violated.”

This contrasted starkly with the HRW report which included interviews with 250 fisherman and former fishermen.

Comment: Plus ca change.  Just as former Prime Minister Thaksin Shinawatra and his then sidekick Newin Chidchob posed eating fried chicken with the message ‘No Bird Flu Here’in the middle of the avian flu crisis, the HRW seems to state that the Thai government is ‘posing’ or ‘lying’ again.

The full report can be read here

(Brussels, January 23, 2018) – Forced labor and other rights abuses are widespread in Thailand’s fishing fleets despite government commitments to comprehensive reforms, Human Rights Watch said in a report released today. The report and a 15-minute film were released at a briefing at the European Parliament on January 23.

The 134-page report, “Hidden Chains: Forced Labor and Rights Abuses in Thailand’s Fishing Industry,” describes how migrant fishers from neighboring countries in Southeast Asia are often trafficked into fishing work, prevented from changing employers, not paid on time, and paid below the minimum wage. Migrant workers do not receive Thai labor law protections and do not have the right to form a labor union.

Even though Thailand has received a “yellow card” warning that it could face a ban on exporting seafood to the European Union because of its illegal, unreported, and unregulated (IUU) fishing practices, and the United States has placed Thailand on the Tier 2 Watch List in its latest Trafficking in Persons (TIP) report, Human Rights Watch found widespread shortcomings in the implementation of new government regulations and resistance in the fishing industry to reforms.

“Consumers in Europe, the US, and Japan should be confident that their seafood from Thailand didn’t involve trafficked or forced labor,” said Brad Adams, Asia director at Human Rights Watch. “Yet despite high-profile commitments by the Thai government to clean up the fishing industry, problems are rampant.”

Human Rights Watch interviewed 248 current and former fishers, almost all from Burma and Cambodia, as well as Thai government officials, boat owners and captains, civil society activists, fishing association representatives, and United Nations agency staff. Of those interviewed, 95 were former fishers who survived documented incidents of human trafficking, while the other 153 were, with a few exceptions, still active fishers. The research was carried out in every one of Thailand’s major fishing ports from 2015 to 2017.

Following media exposés on human trafficking and brutalization of fishers on Thai fishing boats in 2014 and 2015, the EU imposed the yellow card for Thailand’s failures under its IUU fishing program. The EU also demanded that Thai fishing fleets stop abusing the rights of undocumented and sometimes trafficked migrants as fishers, and said that Thailand should undertake reforms to end the abuses. The US TIP program has pressured Thailand by keeping it on the Tier 2 Watch List, one step above the bottom tier.

The Thai government responded by scrapping antiquated fishing laws and issuing a new ordinance to regulate the fishing industry. The government extended application of the key provisions of labor law regulating wages and conditions of work to fishing vessels, and established in law some International Labour Organization (ILO) treaty provisions through adoption of the 2014 Ministerial Regulation concerning Labour Protection in Sea Fishery Work. Migrant fishers were required to have legal documents and be accounted for on crew lists as boats departed and returned to port, helping to end some of the worst abuses, such as captains killing crew members. Thailand also created the Port-in, Port-out (PIPO) system to require boats to report for inspections as they departed and returned to port, and established procedures for inspection of fishing vessels at sea.

Some measures, such as vessel monitoring systems and limiting time at sea to 30 days, have led to important improvements for fishers. However, measures to address forced labor and other important labor and human rights protection measures often prioritize form over results, Human Rights Watch found. The labor inspection regime is largely a theatrical exercise for international consumption, Human Rights Watch said. For example, under the PIPO system, Human Rights Watch found officials speak to ship captains and boat owners and check documents but rarely conduct interviews with migrant fishers.

Despite significant resources provided to the Thai Ministry of Labour and its departments, there is no effective or systematic inspection of fishers working aboard Thai vessels. For example, in its 2015 report on human trafficking, Thailand revealed that inspections of 474,334 fishery workers failed to identify a single case of forced labor. More recently, over 50,000 inspections of fishers implausibly did not find a single instance where laws on conditions and hours of work, wages, treatment on board, and other issues in the Labour Protection Act of 1998, the 2014 Ministerial Regulation, and attendant regulations had been violated.

Requirements that fishers hold their own identification documents, receive and sign a written contract, and be paid monthly are frustrated by employer practices which hold fishers in debt bondage and ensure they cannot change employers. The lack of a stand-alone forced labor offense in Thai criminal law leaves a huge gap in law enforcement and deterrence.

“The Thai government’s lack of commitment means that regulations and programs to prevent forced labor in the fishing industry are failing,” Adams said. “International producers, buyers, and retailers of Thai seafood have a key role in ensuring that forced labor and other abuses come to an end.”

In some respects, the situation has gotten worse in recent years, Human Rights Watch found. For instance, the government’s “pink card” registration scheme, introduced in 2014 to reduce the number of undocumented migrants working in Thailand, has tied fishers’ legal status to specific locations and employers whose permission is needed to change jobs, creating an environment ripe for abuse. The pink card scheme, as well as practices where migrant workers are not informed about or provided copies of required employment contracts, have become means through which unscrupulous ship owners and skippers conceal coercion and deception behind a veneer of compliance. In this way, routine rights abuses go unchecked by complacent government officials who are content to rely on paper records submitted by fishing companies as proof of compliance.

Thai labor law makes it difficult for migrant workers to assert their rights. Fishers’ fear of retaliation and abuse by boat captains and vessel owners is a major factor, but Thailand also restricts the rights of migrant workers to organize into labor unions to take collective action. Under the Labour Relations Act of 1975, any person who does not have Thai nationality is legally prohibited from establishing a union or serving as union leader.

Human Rights Watch’s recommendations to the Thai government, EU, US, and others can be found here.

“No one should be fooled by regulations that look good on paper but are not properly enforced,” Adams said. “The EU and US urgently need to increase pressure on Thailand to protect the rights, health, and safety of fishers.”

“I didn’t know what was going on when I arrived. They just put me in a lockup, and it was only when the boat came in that I realized that was where I’d have to work. I went to do my pink card application on the 4th, and on the 5th I was out on the boat.”

“If I want to quit working here I need to request permission from the employer. Some employers allow us to leave, but some will claim we must pay off debts first. For example, if I can pay 25,000 baht [US$762] to an employer … he may allow me to leave, but if he isn’t satisfied … I would have to pay whatever he demanded.”
–Thet Phyo Lin, Burmese fisher, Mueang Pattani, Pattani province, August 2016

“You can’t leave because if you leave you won’t get paid, and if you want to leave at the end it’s only if they let you. Unless you leave without your money and your [pink] card, you have to obtain their permission.”
–Bien Vorn, Cambodian fisher, Mueang Rayong, Rayong province, November 2016

“My pink card is with my employer. [He keeps it] because some of us run away without having paid off our debts yet. Some employers think that we will lose [the cards] or run away from them.”
–Veseth San, Cambodian fisher, Mueang Rayong, Rayong province, November 2016

“[The Thai officials] come maybe 10 at a time in a vehicle – men and women. They have us line up, show our pink cards, call out our names, we raise our hands, they’re gone.”
–Tong Seng, Cambodian fisher, Mueang Rayong, Rayong province, November 2016

We don’t have time for actual rest. For example, we’ll depart at 6 a.m. from the port and then deploy the nets to catch the fish, and after awhile we haul up the load. We’ll do that routinely until late at night, depending on the amount of fish we catch. So it’s already the morning of the next day by the time we get back to port. However, we don’t have a chance to rest because then we have to start unloading all the fish.”
–Sai Tun Aung Lwin, Burmese fisher, Ratsada, Phuket province, March 2016

“It was torture. One time I was so tired I fell off the boat, but they pulled me back on board.”
–Zin Min Thet, Burmese trafficking survivor, Bang Rin, Ranong province, March 2016