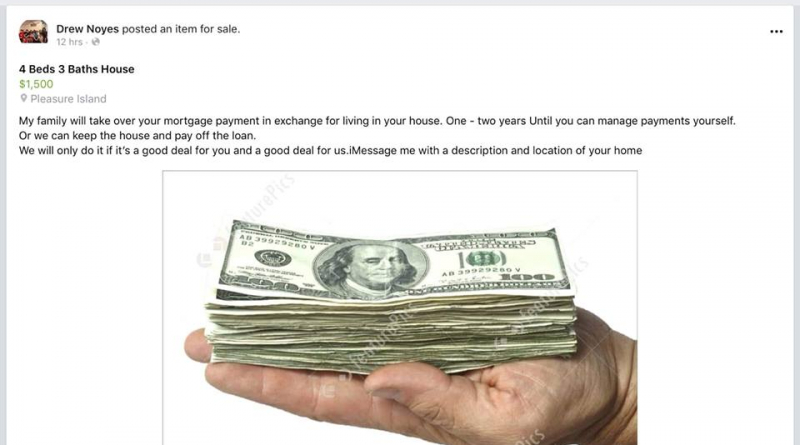 ‘I CAN SAFELY CALL YOU A CAREER CRIMINAL’ – cheque fraud victim 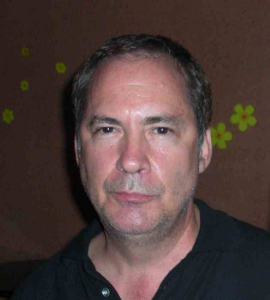 American ‘flimflam’ man Drew Walter Noyes, notorious in Thailand as a property fraudster,and for posing as a lawyer until he fled while appealing a jail sentence for criminal extortion, is up to his old tricks again it seems back in Wilmington, North Carolina.

This time he#s been bouncing cheques, a serious offence under Federal law.

Noyes left Wilmington in the late nineties after being the subject of an exposé in the local ‘Star’ newspaper which accused him of property deceit, inventing his own history and qualifications, and sexual harassment of a colleague. (He is alleged to have refused the woman overtime unless she gave him an oral sex service – see clipping below). This behaviour he continued in Pattaya with Filipino workers whom he had attracted to the country by using social media.

When he arrived in Thailand for a while ran beer bars in Pattaya called the Lollipop and Zebra, but then re-invented himself as a man whom the Bank of Thailand had brought in to solve the country’s financial crisis.

He opened a ‘law’ office in Pattaya  –  PAPPA LAW which became One Stop Legal Services (though neither was registered as a law office) and claimed he was the only American licensed to practice law in Thailand (He never studied law) He also opened a so-called newspaper ‘The Pattaya Times’ to promote himself with local officials.

His advice to foreigners wanting to by property in Thailand was to convince them to put them in his (Noyes’) wife’s name. (‘Much safer than putting it in the name of your own Thai wife’, he said). In a corrupt deal with the Thai National Housing Authority, he also sold government housing intended for the poor to wealthy foreigners at a considerable profit. 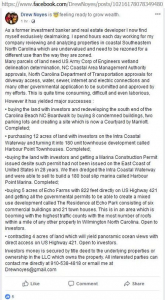 He was finally undone by this website together with Michel Goulet, a businessman who had opened a beauty clinic in the resort whom Noyes tried to extort out of 7 million Thai baht (US$219,317) – on pain of a police raid during which Noyes said ‘illegal substances would be found’.

He even started a web-page ‘on behalf of’ the Crime Suppression Division of the Thai police where members of the public were encouraged to shop foreigners up to no good. But he was promptly ordered by police to take it down. He fled Pattaya three years ago.

Back in Wilmington local journalists have not caught up with him yet. But he has been keeping a relatively low profile. This is understandable as he has some ten children to take care of from various Thai wives.

He has been variously linked to a development called ‘Echo Park’ and has put this (left) his latest CV up on Facebook,

This week he has been claiming on Facebook that he has been by the sea in Thailand with his daughter.  However Apps indicate he is in North Carolina, where he has put up this curious advertisement. 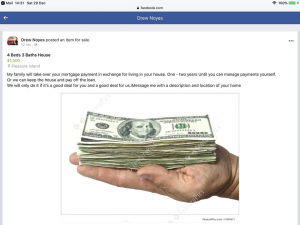 Rest assured Drew Noyes will be aiming to get cash or property – not give it away. He’s not known for that,

He has also been advertising 613 Green Valley Drive up on AirBnB where he and his latest wife ‘Tan’ are described as ‘superhosts’.  He comes from New Hampshire, he says, and his wife Tan comes from Thailand where the country’s slogan is ‘Up to you!’. 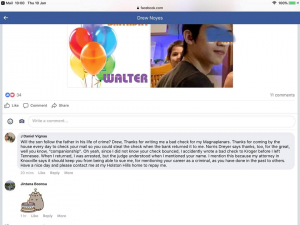 However, the first fraud report has come in (above) and the complainant from Knoxville, where Noyes spent his youth and university days studying ‘marketing’ is not a happy bunny at all and refers to Noyes as a ‘career criminal’ – something which his lawyer says is a safe thing to do.

In the last week Noyes has been posting on Facebook giving a false in Thailand saying he is at the beach with his daughter. No chance.

Meanwhile for those who have outstanding claims against Drew Noyes on June 15th last year his ex-wife is recorded by Hanover Country Registrar as having transferred three plots of land at 613 Green Valley Drive over to Drew Noyes and his latest Thai wife Pawadee Jittrerom Noyes. (He had kept the land in Nittaya’s name to avoid paying tax). 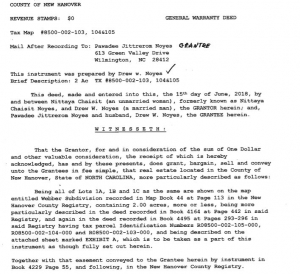 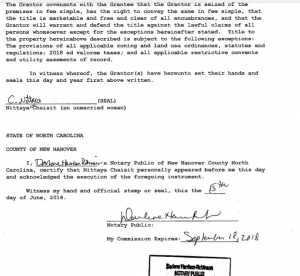 (Below) Noyes told some people that it was an April Fool’s Day Joke – to others he claimed he had sued for libel and won.

But it pales compared to what he got up to in Thailand. 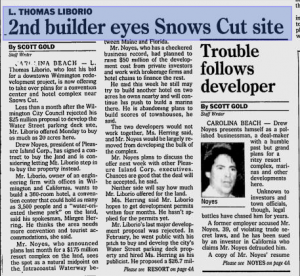 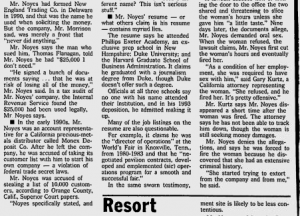 One thought on “FLIMFLAN MAN DREW NOYES BOUNCES BACK IN WILMINGTON, NORTH CAROLINA”