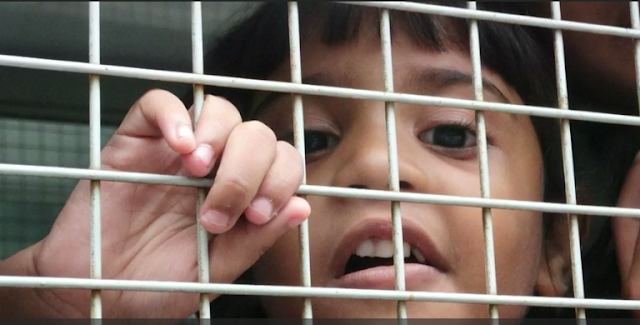 A BBC journalist has blagged his way into the Immigration Detention Centre in Bangkok to broadcast a scathing report on Thailand which he says welcomes tourists but refuses to help anyone seeking refuge.

The report by Producer-reporter Chris Rogers was broadcast yestersay and today and will be broadcast again. tomorrow on BBC Our World.

The documentary, which may have been overshadowed in the British media by the deaths of three backpackers in Vietnam, tells the story of Pakistani Christians who have fled attacks by Muslims and arrived in Thailand.

One Pakistani woman is heard saying: “Oh God, take us away from this country as soon as possible.”

And it describes how, despite applying for UN asylum seekers status and carrying UNHCR papers, they are regularly rounded up and repeatedly fined (4000 baht in court or 50,000 direct to the Immigration Department). The IDC is bulging.

Local Christian charities are supporting the Pakistani Christians but the Thai authorities appear to be fed up with the slow process of the UNHCR (United Nations High Commission on Refugees) . They arrest and re-arrest. Many Pakistanis are shackled in jails purely for being asylum seekers.

Mothers are separated from their children, husbands from their wives.  Children are kept in the jails contrary to the UN convention Thailand has signed.

The Thai government says it rounds up people who could be considered as terrorists or criminals – that includes apparently, Pakistanis, Somalis and Palestinians.

The UNHCR does admit that the conditions under which the Pakistanis are held are ‘unacceptable’. The BBC and others say it is ‘inhumane’ and Thailand is in breach of UN charters which it has signed.

Thailand has already been damaged by allegations of the human trafficking of Rohingyas, slavery of Burmese and Cambodians in its fishing industry, illegal actions against Burmese in its fruit canning industry and it’s anybody’s guess what next.

This report was understandably not undertaken by the BBCs Bangkok based journalists.

The text of Chris Roger’s story can be found at this link. But I have copied below as the programme itself will not be available on this link to BBC iplayer in Thailand.

I myself have been into the IDC many times although I have been asked not to reveal how I did it. Chris Rogers was happy to say that a charity group helped him in. The urgency of the report was more important than the repercussions which may follow.

The names of most interviewees have been changed, for their safety

Chris Rogers reports for Our World: Thailand’s Asylum Crackdown on the BBC News Channel on 27 and 28 February at 21:30 GMT and BBC World News starting on 26 February (click here for transmission times)