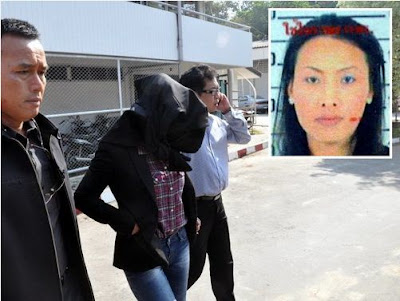 Foreign home owners in Chiang Mai have been caught between a rock and a hard place after the arrest of a major developer for murder and suspicions that a foreign housing development in the city has been built with drugs money.

Some are fearful that their investments may have gone up in smoke after the arrest of  Nitaya Jirayanitikul (37) and four gunmen, whom she allegedly paid 200,000 baht to kill her drugs dealer husband Somchai Terja.

Somchai was killed last October – shot dead and thrown into an irrigation canal in Cherng Doi, Chiang Mai.
Nitaya had originally reported to police that her husband had been kidnapped by criminals.

Police Colonel Chawaenchai Teerakul  at a press conference announced that the motive for the killing appeared to be property in Somchai’s name.

Somchai had been jailed in the past for 12 years for drugs offences and Nittaya ran Chiang Mai’s Jasmine Homes Property Company with Briton Steve Malone.

Later she quit to start up Jasmine Happy Homes which has a large development of upmarket homes in the Sansai area of Chiang Mai.

According to police an investigation was under way into the funding of housing notably a Jasmine Happy Park project in Sansai of 40 houses valued at  4 to 5 million baht each. If it came from drugs money those properties could be seized.

Meanwhile the offices of Jasmine Happy Park remain locked and several foreigners appear to have been denied access to their dream homes.

Going back to Buri Ram

One of the foreigner owners has commented on Thaivisa.com:


“To many of us who purchased our land/homes from Jasmine Homes we are now in a position that she probably was laundered drug money when she purchased the land and we now face an unknown future. Even though we used “Clean” money in our purchase we have no idea what or how much more we are facing to make this issue go away and clear our properties.

“How many officials will have their hand out for their piece of the pie?


“Personally, I am going to an attorney this week to represent my wife and try to get to the bottom  of the issue and push for a quick resolution. I will be tasking the attorney with dealing with the bank since I can see no reason to continue making mortgage payments on a property that “Might” be tied up in litigation for a long time!”


Worse case, I go back to being a renter or moving back to Buriram where we have a house free & clear.


I love Chiangmai and don’t want to move back to Issan unless all other options fail but if need be I will walk from Jasmine Homes.”