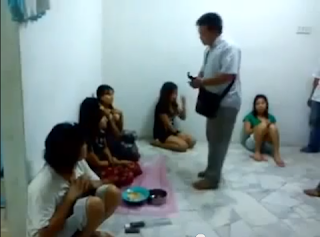 The Burmese girls shown in the video being beaten up at an undisclosed location thought to be in Thailand were in fact being attacked by men from their own country for bring shame on it, it is claimed. And the video was allegedly shot in Malaysia.

A translation of the video by a Burmese national known as ‘Miss Vodka’ follows below. It appears to be a satisfactory explanation and puts Thailand off the hook.

The video below is a longer version which gives a clearer picture and shows that the men appear to be slapping, feigning punches in some cases. A man wearing a Burmese Sein Sekkya bag and carrying a mobile phone appears to be giving a lecture.

“You girls are Burmese, We also are the same. We all came here to get better jobs to have better lives. You exchange your  virginities and diginity with (for) hand phones which are only worth $200,$300 and (get) treat(ed) to some dinners.
“If you want money, why don’t you get proper jobs like other people. Continues… They exchange you girls.  You all are already in foreign country. If you want to do that kind of thing for living, why don’t you just do it in own country?”
Then the men asked the boy who seemed to be working together with the girls to call them up straight away if any of the girls do that kind of mess again. 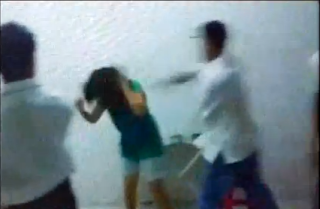 They beat the girls up for their own sake, so that there (were) no apparent bruises or any blood at all. The girls themselves looked ashamed that they just kept quiet it seems.
The writer added, the men had no other choice than beat them up like mothers beat their own kids, in such incidents as, they cannot make the girls listen to them only by talking anymore.
The writer then said, he is not applauding the men to beat the girls, but on the other hand, they have no other purposes or any bad intentions by beating the girls apart from the fact that, they just wanted them to stop doing whatever they were doing.”

A Bad Dancer Always Has Trouble With His Balls – Pattaya

December 11, 2009 Andrew Comments Off on A Bad Dancer Always Has Trouble With His Balls – Pattaya

End Of The Road For Drug Lord Khun Sa – Scotsman

October 30, 2007 Andrew Comments Off on End Of The Road For Drug Lord Khun Sa – Scotsman