Well Thailand’s turbulent Boxing Day is over and now we’re wondering where we all stand in Thailand. At least I am.

The government is insisting it will go ahead with elections on February 2nd. The BBC appears to be admonishing  the anti-government  protesters.  And foreign journalists are going to war as a correspondent, with a Special Forces background joins the troops in Bangkok.

So what is the end game? Will the pro-government Red Shirts come to town or will the anti-government protesters continue their disruption and break up the election process?  Will Suthep’s ‘violent and crazed loonies’ take the day? Will the army step in?  – And for whom?

But one option is for the army to step in – before the Red Shirts – and ‘for the sake of law and order’ run another interim government to oversee an independent Reform Panel – a western democrat’s nightmare.

Having already rejected previous reform panels the current Prime Minister’s recent proposal to allow one after all has not garnered any support.

Here’s the rub. What is true? What is not?

Because yesterday the BBC broadcast a government spokesman saying the February 2nd election had been set in stone and could not be legally changed.  Who IS running the country? Didn’t they set the date?

Similarly in two separate stories the Bangkok Post suggested firstly that the Election Commission could stop the election process through the action of individual  – and then later quoted the Secretary General as saying it would go ahead regardless.

And then there are the foreign press and pundits, who are involved in a battle of their own and seem to have drawn up lines either attacking each other, or the government protesters,  or Abhisit Vejjajiva, Yingluck and Thaksin Shinawatra.

The thing about the media and social media nowadays is that correspondents having done their own piece for their own newspaper or television network then go online with a few personal feelings of their own.  These comments of course are not those of the organisations they work for.

But you know – we can’t just help slipping things out.

At the moment correspondents are raging about Michael Yon, an American photojournalist, who was very busy around the Japanese-Thai stadium yesterday getting lots of pictures with the army –  even quoting a female army medic as saying ‘the government must go’.

Nicknamed ‘Bam Bam’ Yon is a colourful character. He is apparently ex-US Special Forces and an Iraq and Afghanistan veteran of some controversy. He tends to always support the military.

But his style has been described by the New York Times as having  “enough first-hand observation, clarity and skepticism to put many professional journalists to shame.”  In 2007 in Iraq he dropped his camera and joined in a firefight, he says, to save his own life.  He was subsequently admonished by army top brass. He is also described as a ‘Conservatives’ journalist.

Yon got in with the army. His pictures seemed to show that they actually had a camp within the Japanese-Thai stadium and he took a photo of a Thai army female medical officer quoting her as saying ‘ We love the King. Yingluck must go’.  The Thai army are not going to help the police, he stated.

Marshall has been twittering every picture of anti-government protester’s violent action he can find or has been sent and does not hide his light under a bushel. He is best known for writing about the Thai Royal family for which of course he has had to leave Thailand.

Andrew Marshall receives a lot of support  and is disheartened at the hate mail he has been getting.

Jonathan Head too seems shocked by the violence,  particularly that used during an attack on a taxi driver.

Foreign journalists seemed a bit disheartened at the verbal and physical threats. (Some local ones too).

But then again they seem to forget that Thai people think they are telling them what to do! And the Thai smile can easily dissipate behind a monitor, or in a Samsung tweet.

We may actually be a bit more tolerant in the UK.

I once had to go to a memorial event for a colleague on the Observer, Farzad Bazoft, who was hanged by the Iraqi government on the personal order of Saddam Hussein for spying (he was’nt) to find that the whole entourage was being harassed by UK Iraqis who suggested a lot more journalists should have been strung up with him.

We had to suppress our disgust. I was all for a public lynching. But Britain’s freedom of speech, GBH and homicide laws prevented, any action.

Some also seemed surprised at the violence, seemingly oblivious to the fact that people intending to bring down governments in any country do not do it by making daisy chains.

Some also seem ignorant of the fact that these matters are not played by the Marquis of Queensbury Rules in Thailand.  When shots are fired in Thailand often we do not know who fired them and for what reason.

I have to put my hands up to the fact that I have been broadcasting to three continents on the situation in Bangkok,  but I do not have a side in this fight…except that I have watched governments come and go and the only honest one I believe I have seen in Thailand has been the un-elected one of former Prime Minister Anand Panyarachun.

There may be no cure for Thailand until the old feudal lords or ‘influential persons’ and ‘kingmakers’ are removed from the equation. The Democrat Party is loaded with them – so is the Pheu Thai Party. 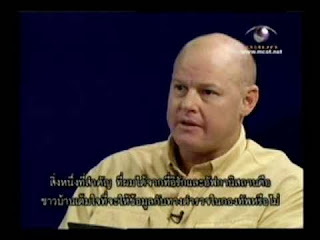 Meanwhile the Michael Yon pictured at the top is now the Michael Yon pictured here (left). Its possible he has become more Conservative as the years progressed. He arrived just after the Rajaprasong riots in 2010 and then proclaimed from a survey of the scene that the military men were very restricted in their use of weapons. I think at this point I will have to say that many journalists will disagree. But as you can see from the first in a three part series of interviews here – he could not find the bullet holes. The natural conclusion to me seems to be (1) either he’s looking in the wrong place, (2) the holes were taken away in the bodies of people the bullets killed (3) The RTA rations its ammunition more carefully than US Special Forces (4) He did not conduct a very scientific survey.


FOR DRONE SHOTS OF MILITARY ON THE ROOF CLICK HERE

December 26, 2013 Andrew Comments Off on THAILAND FACES MORE VIOLENCE AS GOVERNMENT REFUSES TO BACK DOWN ON ELECTION ISSUE

November 25, 2013 Andrew Comments Off on Whisteblowers demonstrate outside Thailand’s FBI