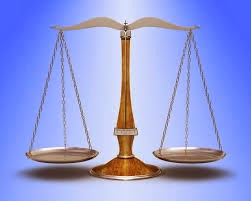 Two cases start in the Criminal Court in Bangkok tomorrow
(Monday) in which three expats are accused of plotting a massive internet
campaign against an investigative journalist to cover up their own activities
in Thailand.
Facing libel and Computer Crime charges are Brian Gerald
James Goudie (Goldie), 48, from Falkirk, Scotland, Drew Walter Noyes, from New
England, USA, and David John Hanks, from Girvan, Scotland, who, it is alleged re-invented themselves in Thailand.
Goudie and Noyes are also accused in a separate case in Bangkok Criminal
Court of conducting a campaign against Alastair Cooper, a UK oilman, and supporter
of journalist Andrew Drummond who has conducted investigations spotlighting
these men’s alleged activities in Thailand.
Among the alleged libels against against Cooper are that he was a drugs
supplier and that he was a bar in Thailand when he should have been offshore.
In a separate civil case Cooper is suing hanks for 5 million baht for suggesting that he plotted to kill Hillary Clinton.  Goudie  produced a photo on his website of Officer Jason Trumbower, of the Florida State University Police,  with President Clinton stating that Trumbower (Hanks’ son son law a Florida University cop) had alerted US Marshals and the ‘Secret Service’ about Cooper.

Currently Drew Walter Noyes, 59, former publisher of the notorious
Pattaya Times*, and his common law wife Wanrapa Boonsu, former editor, are on
bail of 200,000 baht charges with the attempted extortion of the Thonglor
Clinic, Jomtien.

They are also defending a civil case for allegedly cheating a
Dutch national out of 2.5 million baht.
Drew Noyes was exposed in the Morning Star in Wilmington, NC, in 1996, as a man with a history of fraud, abuse of women, and dodgy property and share dealing, but he arrived in Pattaya claiming he was a lawyer, and investment broker who had been summonsed to help Thailand out of the Asian Financial crisis ‘by Royal Proclamation’
Brian Goudie, 48, is currently on bail of 400,000 baht for
allegedly cheating a 75-year-old woman out of US$300,000 baht.
Under the name
Brian Goldie he had previously been sentenced to 6 years in jail in Australia
for stealing AUS$400,000 plus from his employers.
A former bank clerk he arrived in Thailand re-inventing himself as a British barrister and former officer in the Royal Marines and started up a controversial law company Alba Laws, which is also charged along with its Thai managing director.
David John Hanks,66, is the former licensee of ‘Masquerades’
brothel in Keysborough, Melbourne. Two years ago he sold his business to Chinese and says he has formed a company, registered
to the office of Drew Noyes’ One Stop Service Center, to repair furniture. However he has been active in Pattaya attempting to start up a business called ‘Cupid’s which does not appear to repair furniture.
It is alleged that Noyes and Goudie set up a series of
internet web sites including andrewdummondwatch.blogspot.com, pattaya-times.com,
meninsuitsandinfluential people.com, to impersonate or discredit British
journalist Andrew Drummond, suggesting he was a fraud and had no right to
practice journalism in Thailand.

Drummond has also made several full feature international documentary
investigations including: ‘Burma’s Forgotten War; (BBC Everyman) written by; ‘No Man Wants
to Die (Channel 4), Investigation by; ‘Lord of the Golden Triangle’ Investigation by (Observer Films for ITV UK /ABC
Four Corners (Australia) Investigation by; The ‘Sex Slave Trade’ C4 Dispatches (Thailand Investigation by)
For the last 20 years he has worked in South East Asia
filing mainly to the British press and tv from Thailand, Burma, Cambodia, Malaysia,
Singapore, Philippines, Korea, China, Japan, Fiji and also Australia.
He is the registered correspondent of the ‘London Evening Standard’.


Drummond said: “As a journalist I am against restrictive libel laws but I have no choice but to take action in the face of a deliberate campaign to deprive me of funds and the ability to work as a journalist. I think I can say on behalf of Ally Cooper that he also will not be intimidated.”

*The Pattaya Times carried stories that Drew Noyes had found the cure for AIDS, had found a solution to the Gulf of Mexico Gulf spill, and even exposed one of its own reporters for overstaying his visa.

Comment: Google Search of Andrew Drummond and Bangkok. By frantically distorting Google (which Google says cannot be done) many of the anti-Drummond sites come at the top of the list. After this site itself comes andrew-drummond.watch.blogspot, Pattaya Times, onestopservices, and noyeswatcher, myriadofflies. 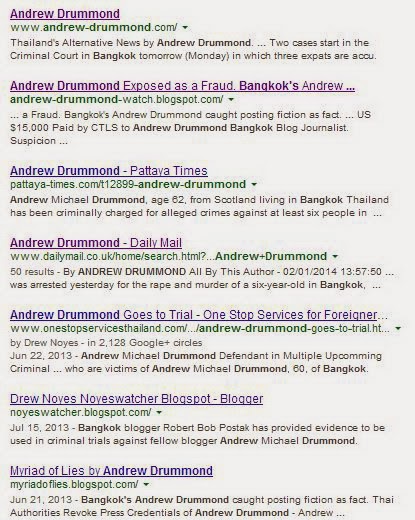 November 10, 2015 Andrew Comments Off on FREEMASON ALERT – FORGET THE HANDSHAKE

FEAR AND LOATHING ON PHUKET?

December 19, 2013 Andrew Comments Off on FEAR AND LOATHING ON PHUKET?