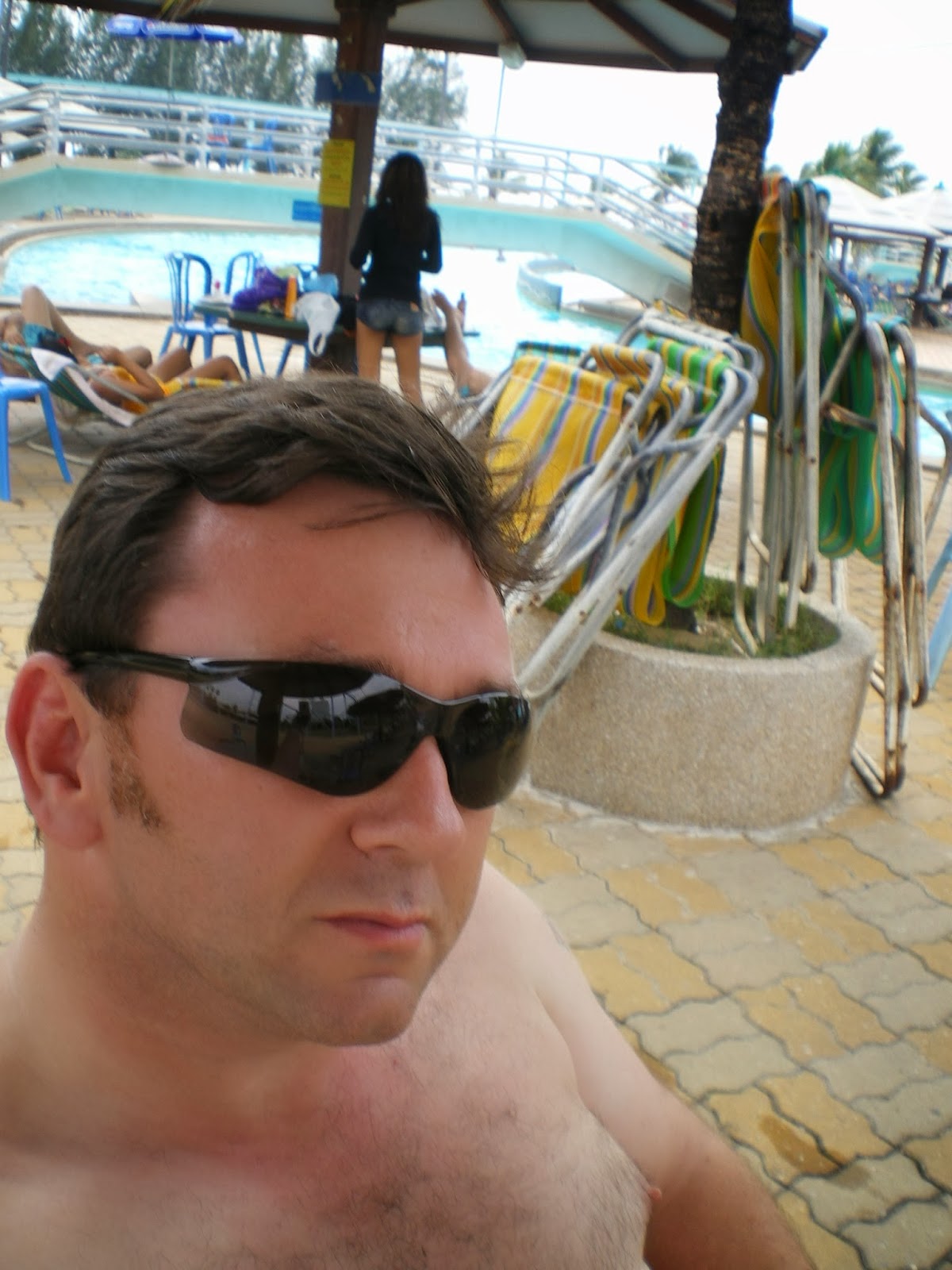 A British journalist who claims he is being sued by a convicted criminal, a former pimp, and a man accused by the American press of share and property fraud, and sexual harassment said tonight that he would be revealing the ‘dark side’ of foreign crime in Thailand at a press conference tomorrow (Thursday).


British journalist #AndrewDrummond, former correspondent for the Times and Observer and currently accredited to the London Evening Standard – Britain’s biggest evening newspaper, said that foreigners with dubious pasts had infiltrated Thai society to such an extent that there was now widespread intimidation of ‘honest foreigners’ and ‘retirees ‘and even tourists in Thailand.

Drummond an award winning journalist is being attacked by foreigners using Thailand’s computer crime laws. He said: “This is all they can do but it works well for them.  They wish to drain me of my cash. I have had a Computer Crime case in Koh Samui going on for over a year – yet I cannot say a word in my defence because the law does not allow as the case has not even been accepted for trial.” 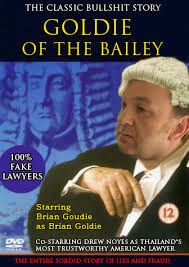 His statement came as #BrianGoudie, 47, from Falkirk, Scotland, who was sentenced to six years jail in Australia of theft of AUS$400,000, and who has a television documentary dedicated to his scams in the international series ‘Serial Swindlers’ announced on his pseudo legal website
Casewatchasia.blogspot.com that he planned a series of court actions to gag Drummond.

Goudie, who is himself on trial in Thailand for cheating a 76-year-old American woman out of 7.9 million baht in legal fees by falsely claiming to be a British barrister, has announced ‘massive action’ against Drummond in the court in Koh Samui.

He states in pseuoo legal speak in the third party:

close of three preliminary hearings set down for August 5th and 6th in Black Case numbers 1246/2556, 1269/2556 and 1826/2556 which relate to charges brought by David Hanks and Brian Goudie under Thailand’s tough Computer Crimes Act.

“It is understood that the Plaintiff’s will also ask the Court to consider issuing an order to The Ministry of Information and Communications Technology (MICT) to temporarily block URL’s on Drummond’s site regarding the proceedings pending trial of the cases.”

‘Drummond has in the past claimed immunity from prosecution as a journalist acting in the public interest. 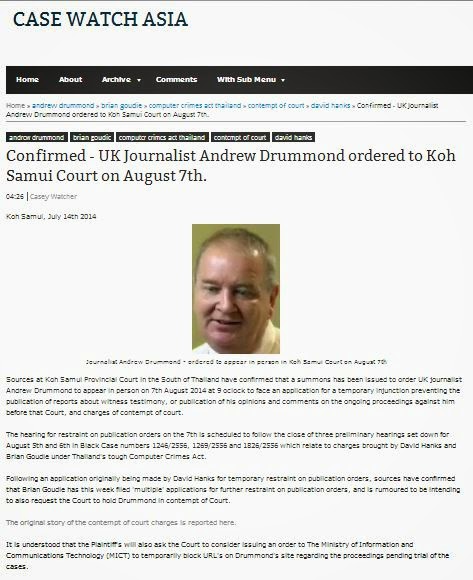 “However lawyers for Hanks and Goudie now say that defence has been negated by the use of ‘photoshop’ photos and also by apparent attempts to sway public opinion and in Drummond’s own word to ‘ridicule’ the Plaintiffs – a strategy that in Thailand is frowned upon and may be considered contempt of court.”

Drummond insists he has never claimed a journalist is immune to libel.

“I have merely stated that I am doing my job as a journalist and that the allegations I am making are true. If this man makes false claims to be a barrister and a Royal Marines Captain when he is a common thief then he can expect to be held up to ridicule.” 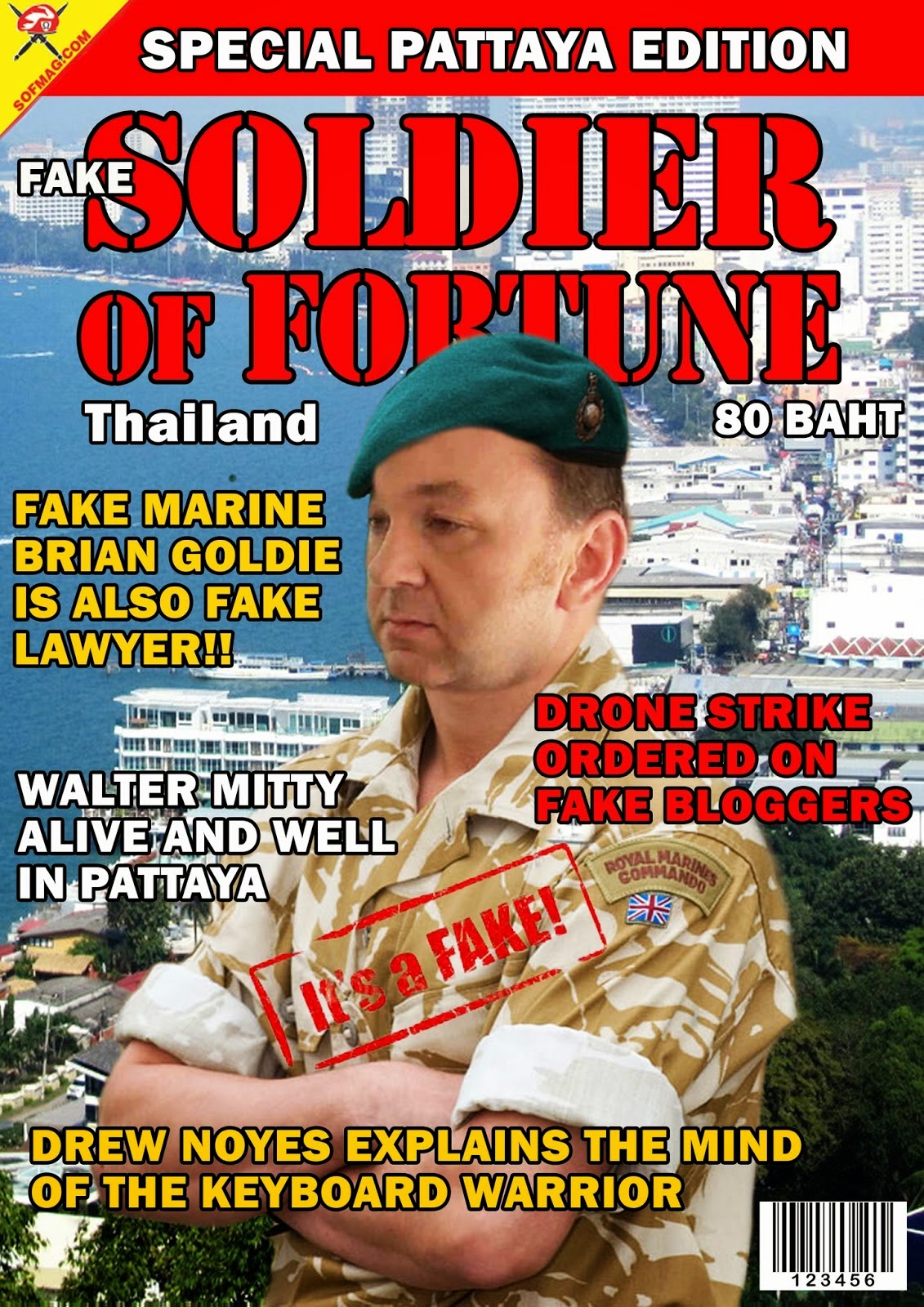 Goudie is due in court on July 28th in Bangkok to answer a 5 million baht damages case brought against him, American national Drew Noyes, former publisher of the Pattaya Times, and #DavidHanks*, former licence holder of Masquerades brothel in Keysborough, Victoria, Australia by British national Alastair Cooper.

Goudie is suing not Andrew Drummond over any articles but photo-shopped pictures which he says ridicule him. The pictures show him in a barrister’s wig and gown (He has claimed he is a barrister)  in the uniform of an officer of the British Royal Marines (He claims falsely that he was a Captain in the RM) and as a jail bird. Not only has he spent time in jail in Australia, but also in Nong Plalai prison Pattaya, after failing to surrender to bail.

Two years ago #DrewWalterNoyes, who also falsely claimed to be a lawyer in Thailand also attempted to close down this site. Noyes is on trial for extortion. 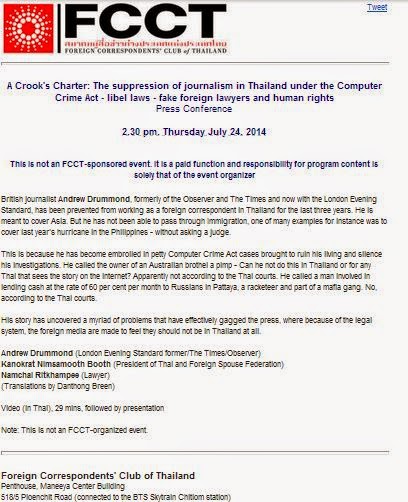