It was supposed to be the day of reckoning. After three years of being jostled and pushed about and having my feet stamped on outside court rooms and constant verbal abuse by two fake foreign lawyers and a former pimp in Australia it appeared they had been finally caught out.

At a previous hearing at Bangkok Criminal an American Court Drew Walter Noyes, and two Scotsmen, Brian Goudie, from Falkirk and David Hanks, from Girvan, had been warned by a judge after a witness reported them for taking pictures in the court.

They had all been asked to produce their phones. The judge decided not to check their phones individually (at least one – Noyes – had two mobile phones). Instead she warned that if any pictures appeared anyway she would take the issue very seriously indeed.

The judge told Chris Gleeson, the co-owner of a range of language schools in Bangkok and Thailand’s eastern seaboard: ‘Tell me if this happens and I will take this seriously.”

Lo and behold shortly afterwards up pops my picture taken in court  on the website phuketnewsonline which is a bit like The Pattaya-Times very short on news, but full of material lifted from somewhere else. 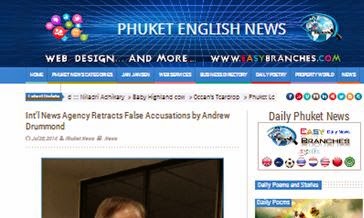 The picture is under a completely false story headlined ‘An International News Agency Retracts False Stories by Andrew Drummond’ (that’s me) who the story later goes on to say is a convicted criminal.

Anyway I remonstrated with the owner of this site  a Dutchman called Jan Jansen. who denied that he was a friend of Drew Noyes and said it was a mistake made by a member of his staff, so he pulled it down.

But he refused to say who sent him the story, which was by now very obvious because searching his site I also saw other stuff sent to the phuketnewsonline from Noyes’ Pattaya Times online which was also in contempt of court.  And of course Noyes and Jansen were a lot closer than he made out. In fact the Pattaya Times had published a completely fabricated court judgment under the heading – ‘Drew Noyes Cleared of All Charges’.

(LEGAL NOTE: Andre Machielsen wishes to state that he does not have a criminal conviction for drugs nor are any of the allegations by Drew Noyes true. I am to happy clarify that for a second time and state that Machielsen has provided documentary evidence. I have directed him to the Drew Noyes and Jan Jansen sites).

Quite clearly Noyes has not been cleared of all charges. He is on trial in Pattaya for the attempted extortion of the Thonglor Clinic in Jomtien demanding 2.3 million baht to stop a police raid on his premises, when presumably something illegal would be found and the Pattaya Times would publish a report.  While Noyes was cleared of a libel charges – contrary to his claims both the Pattaya court and appeal court refused his applications to counter-sue.

His colleague Brian Goudie is on trial in Pattaya for posing as a lawyer to cheat a 76-year-old American woman out of 7.9 million baht (about £149,000) and the third man David Hanks, former registered owner of the ‘Masquerades’ a brothel in Keysborough,  an industrial suburb of Melbourne, is on trial for racketeering – working with what the Thai press described as a ‘mafia group’ lending money to Russians in Pattaya at 60 per cent per month. (These are the guys who recently tried to scam American billionaire Bill Monson),

Anyway back to the court case where my lawyer presented the evidence of contempt. It’s a different judge.

Did any of you take this photo and give it to phuketnewsonline?. No, they all say.  #DrewNoyes points to my Thai assistance and says: ‘It was her!’.

Attempts to contact the original judge appear to be unsuccessful. She had not written anything in her trial report of picture taking in court.  If anyone takes any pictures again, said the judge, it would be taken seriously. Cases can be taken against phuketnewsonline, she added.

Chris Gleeson gave evidence in my case (I cannot report this) and at the end he was asked if he wishes to say anything further. He states that he is very concerned over the contempt because the last judge had promised she would take action. He complains of the delaying tactics of the defence and says Drummond is a ‘famous’ journalist who is fighting for people who have been cheated in Thailand, and trying to raise three children at the same time.  This can be reported as it is in relationship to the contempt claim.

However these statements do not in exist in the court records, but neither was a lot of what he said under cross examination. When he complained, he was told, that as he had said those things in his evidence in chief, it was not necessary to repeat them….and that I am afraid is the Thai system.

There is no verbatim record of evidence.  It is up to the judge what he or she writes down. It is easy to see how this is open to not only abuse but serious miscarriages of justice. Although there is no suggestion that this is happening in this case.

Once again it was pandemonium in court as #BrianGoudie and company kept remonstrating.

‘What on earth is going my assistant?” here asked my assistant?’ and then explained to the judges what really was going on. The judge apologized.

Goudie had tried to accuse me of contempt of court by presenting a report in which I merely updated readers of court dates!

Goudie, who stars in his own episode of ‘Serial Swindlers’ ‘Brian Goldie – Swindler Scot’ – he changed his name to Goudie before coming to Thailand – is, I have to say, fooling all the Thai courts.   ‘It’s sair to bair’.

Everything of course was lost in translation the continial changing of judges in these cases means that each time it takes quite a while for them to realise what is going on because of course they do not understand English.  Hence whenever I go to testify and Goudie says ‘sh*tface’ or ‘ c@nt’ it goes over their ears.

Meanwhile this case in which I was returning libel charges 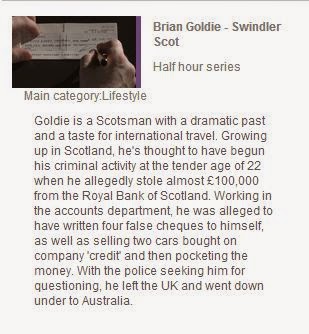 brought against me by this trio has been adjourned to a date in December – when perhaps we might here an hour’s worth of actual evidence.

And I guess I will not get my kids back to school in the UK for many years to come.

Meanwhile tomorrow in Pattaya Court Brian Goudie will fight an application to have his bail withdrawn on his cheating charges.

April 12, 2014 Andrew Comments Off on BRITISH JOURNALIST IN TALKS WITH DEPUTY THAI PM OVER ‘VEXATIOUS LITIGANTS’.