Police in Thailand said tonight they wanted to an interview a British man in connection with the brutal murder of two young backpackers on the Thai holiday island of Koh Tao. 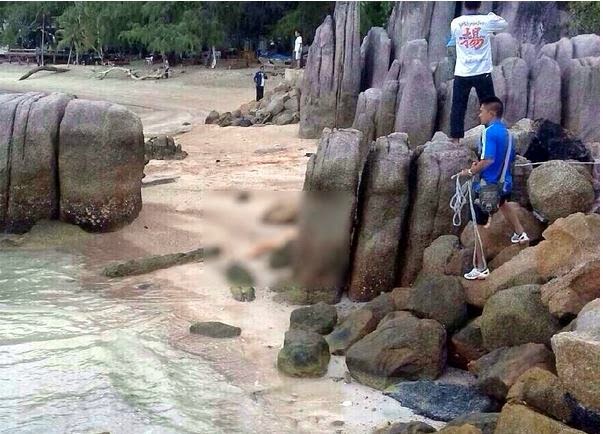 As the bodies of David Miller, 24, from Jersey, and Hannah Witheridge, 23, from Norfolk, were stored in a local temple the murder enquiry had investigators on the alert in the Thai capital Bangkok

‘We need to talk to this man as a matter of urgency,” police said after being told that a potential victim and suspect had left the island despite an apparent blockade of the ferry piers by locals and police.

The man one of two friends of David William Miller,24, from Jersey left the island on the first ferry to the mainland at Chumpon and was believed to be heading for Bangkok.  Thai Police earlier arrested Miller’s other friend, as yet unnamed, as he had some injuries on his hands.

But they released him after he gave a ‘satisfactory explanation’ and their enquiries switched to his second friend.

Police Colonel Songsak, who was brought in from the neighbouring island of Koh Phangan said:

“Although both bodies were naked we do not believe the two were boyfriend or girlfriend.

“We wish to interview David Miller’s friend, but we cannot give out his details at this stage.  His name has been circulated. They all arrived together on August 25th. We need to talk to him as a matter of urgency.”

Colonel Songsak said that Hannah Witheridge, 23,  arrived with three friends on the island on September 12th. Her group had met Miller’s group but they had only known each other for three days.

The naked bodies of Hannah and David were found in a rocky enclave which separates Sairee Beach, the island’s most popular, and another small beach.

The spot is less than 100 metres from their respective bungalows in the ‘Ocean View’ resort.

David’s head had been badly hacked and Hannah had been hacked in the face. The suspected murder weapon, a bloodied hoe, was found nearby.

If police arrest the missing Brit and rule him out of their enquiries they may have to concentrate on the local population.

Almost all high profile murder of young Britons in Thailand have been committed by locals Thais or even Burmese.

Following the discovery of the bodies shortly before dawn today the Regional Police Chief General Panya Mamen flew into Koh Tao, a popular scuba diving island, to urge his officers to find the killer quickly.

The murder could have an impact on tourism.  When Briton Katherine Horton, also 23, was beaten murdered and raped in Koh Samui in 2006 there was a backlash even though the killers were found and sentenced to death, commuted to life imprisonment.

KOH TAO MURDERS – PAGE ONE COMMENT – CAN THE BURMESE HAVE A FAIR TRIAL?

December 8, 2014 Andrew Comments Off on KOH TAO MURDERS – PAGE ONE COMMENT – CAN THE BURMESE HAVE A FAIR TRIAL?