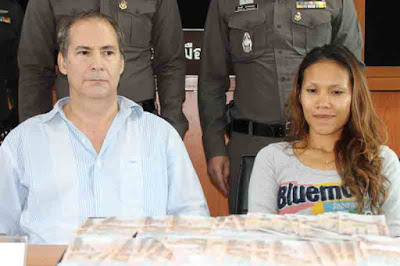 Arrest warrants for extortion were issued at Pattaya Court today for the American Drew Walter Noyes and Wanrapa Boonsu who cheated foreigners while running the Pattaya Times and One Stop Legal Service Center in Pattaya.

The couple, who dined with judges in Pattaya,  had already been sentenced to two years in jail each, but were allowed bail to appeal the judgment.

Noyes fled back to the United States to Wilmington North Carolina where in 1995 he was originally exposed by the Morning Star newspaper under the headline ‘Trouble Follows Developer’.

Thai Court Dismisses Injuction To Close Down This Website

May 3, 2012 Andrew Comments Off on Thai Court Dismisses Injuction To Close Down This Website